When you change the settings, the panel doesn’t reload

Isn’t that the same with all dashboard scripts?
Also, not sure it can be accomplished easily as the scripts are inherently tied to the screen being rendered

(but curious to learn more!)

Is there something i have to change in the settings?

first of all, thanks for making this script! it’s a fun motivator for me to do my lessons.

One thing, may I ask how the speed’s calculated? Because even taking into account the 72-hour average, I get about 12 s/r from the Heatmap script (1), but your speedometer gives me 70 s/r.

Isn’t that the same with all dashboard scripts?
Also, not sure it can be accomplished easily as the scripts are inherently tied to the screen being rendered

(but curious to learn more!)

Inherently yes. But a custom redraw upon save (WKOF settings allow a callback) can update the panel without having to reload the whole page. Especially if you have multiple scripts running a reload can take a few seconds.

I think I saw a setting that mentions the length of time between review sessions. Yep, ‘Session interval’.
Especially for people that review a few items, then handle a phone call before doing a few more reviews, a large session interval can make all that time count as ‘doing a review’.
Try shortening it to 5 or something and see what happens.

That’ll teach me to post a script just before going to bed. [Edit: not to mention replying before I’ve had my first coffee.]

I forgot that the first several people to try out a new script would be level 60s. I think this script is most useful for people between roughly levels 8 and 60, but I’m hopeful that it will eventually be useful for everyone.

One thing I noticed:
When you change the settings, the panel doesn’t reload - I have to refresh the page to apply the new settings

Yup, that was my intended behavior which I intended to document in the first post (but cleverly forgot). I will edit the intro to mention this.

I’ll look into @rwesterhof’s suggestion of using a callback to refresh without going into an infinite loop. Currently, I load and update the settings on every refresh.

As described elsewhere, I think this is likely due to the Session interval value being too high (defaults to 10 minutes). Please set it to something like 2.5 minutes and let me know the result.

Also, could you enable debug then refresh and show me what’s printed in your JavaScript console? [Right-click, “inspect”, then click “console” in the developer window that appears.]

I first go through all the recent reviews looking for “sessions” (reviews done one after another without too much time in between each review). Each session tracks how many minutes elapsed during the session.

The default maximum between reviews is 10 minute. A lower value might be wiser (say somewhere between 2.5 and 5 minutes). I will almost certainly lower the default in a future version. (Since the default maximum speed is 30 seconds, I’m currently thinking a value of 5X to 10X the maxSpeed might be a reasonable default.)

I think I just corrected a bug in the logic, though: in v0.1, if a session only had a single review, the minutes() for that session would report as zero. This is because the API only reports the start time of a review, not how long it took to submit an answer. So start and end time of a session with only one review will be the same.

I v0.2 and later, I use maxSpeed/2 as an estimate for very short sessions (which I think can only happen with one review).

I’d really like to see your console output with debug enabled: The minutes() value returned for one of the sessions must be way off for some reason.

Also: 417 reviews/day over three days!! Yow. I’d be whimpering for sure.

The defaults are definitely aimed at slow-and-steady users like myself. Speed-runners will likely want to bump up some of the values. In your case, you may want to set:

your speedometer gives me 70 s/r.

Can you enable debug, refresh, and send me your console output?

I should leave debug on until it’s had a bit more usage. New version coming up.

I need to look at the code rather than my phone. I’m pretty sure I have another bug in my speed calculation logic.

Only a complete idiot would copy then forget to paste the link target!

my bad, I was asleep! I’m not sure what’s happened, but I’ve updated to v.0.5 and now the whole bar won’t even load; it gets stuck loading reviews, apparently (it’s been like this for quite a while)

And the console output (I think)

I’m not sure if this is really helpful because the script doesn’t seem to actually load, though.

What other scripts do you have loaded?

Do me a favor and try disabling every other script except Wanikani Open Framework and Ganbarometer, then quit and restart the browser (not just refresh).

I’m wondering if there is a weird interaction with another script (still my problem if so, but trying to debug).

The only other hypothesis is if the start date for requesting reviews is being calculated incorrectly. At level 60 you can have a LOT of reviews (the script attempts to retrieve just the last 72 hours worth).

Let me know if none of the above works and I can send you a one off script that just logs befor attempting to retrieve the reviews.

restarting & isolating seems to have done the trick (restarting probably did the trick, I’d already tried refreshing and isolating). It seems to still load quite slowly alone compared to other scripts, oddly.

although, just glancing at the output data, I’m pretty sure I’ve never had a review session longer than 3h, let alone 10h

As described elsewhere, I think this is likely due to the Session interval value being too high (defaults to 10 minutes). Please set it to something like 2.5 minutes and let me know the result.

Also, could you enable debug then refresh and show me what’s printed in your JavaScript console? [Right-click, “inspect”, then click “console” in the developer window that appears.]

set to 2.5 and disable all scripts except wanikani open framework 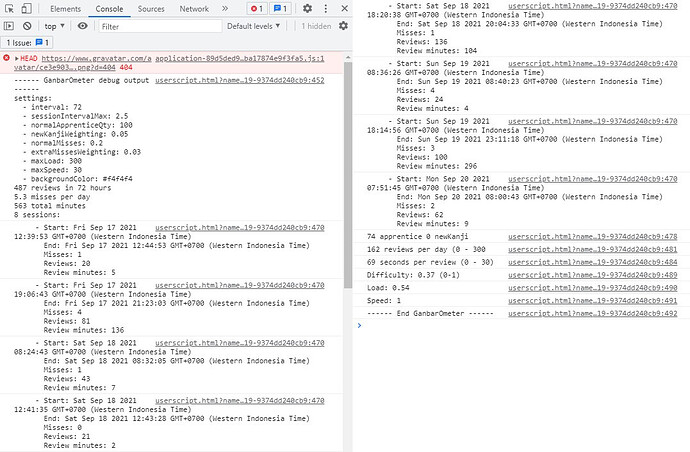 Yeah, unfortunately that’s unavoidable. It takes a few seconds for the API to return the 1331 review items, so the gauges might not appear for a while.

I’ll try to improve a future version to render SOMETHING quickly (a “loading” message of some sort, then update the gauges once the data is retrieved from the API.

The second to last session shows, for example, that you reviewed 100 items and answered all but 3 of those items correctly. The first item in that session was reviewed at 18:14 local time, and the last item was reviewed at 23:11, a span of 296 minutes.

Does that sound correct, or is the script calculating something wrong?

EDIT: Wait, clearly something isn’t being calculated correctly. With a max session interval of 2.5 minutes and 100 items, the longest possible session time would be 250 minutes. This info should help me track down the problem.

Hmm. Let me think about this and look at the code. It appears I may have a bug in the logic that finds sessions.

Were you doing reviews at both 9 am and 7pm on Sunday? The last session entry shows those as the beginning and ending timestamps. I suspect that this should be counted as multiple sessions.

Please upgrade to v1.5 which reports the settings now that it’s working again. Was this output using a Session interval of 10 minutes? Is there any chance you did at least one review every 10 minutes from 9 am to 7pm Sunday?

Bear with me while I figure this out…

Was this output using a Session interval of 10 minutes? 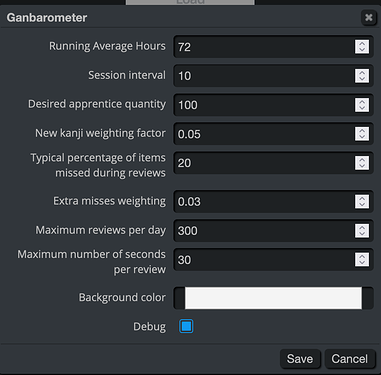 Were you doing reviews at both 9 am and 7pm on Sunday?

Is there any chance you did at least one review every 10 minutes from 9 am to 7pm Sunday?

Please upgrade to v1.5 which reports the settings now that it’s working again.

I updated and restarted Firefox, and it’s been loading for quite some time now… (something like 10m? or maybe 13.68m)

I think the issue involves date calculations with different timezones. It could be affecting the review load as well.

Please disable for a bit, and I’ll post a new version shortly as soon as I figure out what I’m doing wrong with Date objects.

I updated and restarted Firefox, and it’s been loading for quite some time now… (something like 10m? or maybe 13.68m)

Anyway, I THINK the source of the problem may have been timezone issues coupled with how I was using the Date objects. I was definitely doing something truly weird with the options I was passing to wkof to fetch the review objects. I’ve simplified that significantly.

Not sure if it will fix the problem, but here’s hoping.

If you and @tahubulat could both try version v1.6 and report back, I’d appreciate it.

I’ve updated the script to v0.6 and restarted Firefox, but it’s still stuck on loading.

Well that is certainly not alarming at all