At the end of last week (Sat-Sun), I read JoJo and watched Yuru Camp.

Regarding watching and listening, Yuru Camp appears to follow the first chapter of the manga very closely, but not exactly the same. Later, I found subtitle files on Kitsunekko; but not sure how legal they are… Death Note’s in on Kitsuneko too.

I also tried reading on (and Japan’s geography in general), and ; but it still appears I am not the level to really read it yet. Nonetheless, Wikipedia isn’t really read by articles, but rather interlinks of articles.

I will write the whole month’s reflection later, after the month really ends. (Who knows what I will do in the last two days.)

That’s what I found strange at the time of writing 3 months’ plan. I’m glad it now got explained.

Personally, I’ve got my own plans, like weekly/monthly/trimonthly plans/reflection/revision. I wouldn’t take a break as long as 1 month. And ensuring daily isn’t really for me (but isn’t bad at all, also quite similar to clearing up WaniKani reviews too).

About a man who gets tricked by a fox.

Since there’s just one day left I’ve been thinking how to continue once this challenge has finished. I thought for June-reading I’d attempt to read “No Longer Human” by Osamu Dazai. Not sure if I’ll continue any updates on here, but I’ll probably still be reading it come the summer challenge anyway.

I finished ゲゲゲの鬼太郎 too, which means I completed all books and manga I started for this challenge! Hurray! (Now, what can I start and finish in one day for tomorrow?

These last stories were a lot of fun. Summaries and panels collapsed below:

I started the last book in Level 1, Set 1. This book has several different stories. I read the first one today,
わらばなし
笑い話. This is a collection of “Funny Stories”. In the first story, a child goes outside at night. He sees the stars and thinks they are pretty. He gets a stick and tries to grab a star. But his father comes out and tells him, “It is useless. The stars are far away. Your stick is not long enough to reach the stars. It is hopeless.”
This was easy reading and no new words. 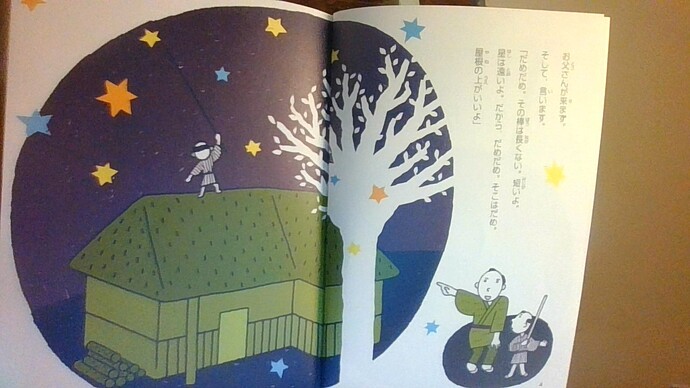 I just read the second story. It is basically about the bush warbler and his song in Spring. Everyone likes to hear him sing. Nothing funny about this story, but a nice reference to Spring in Japan. 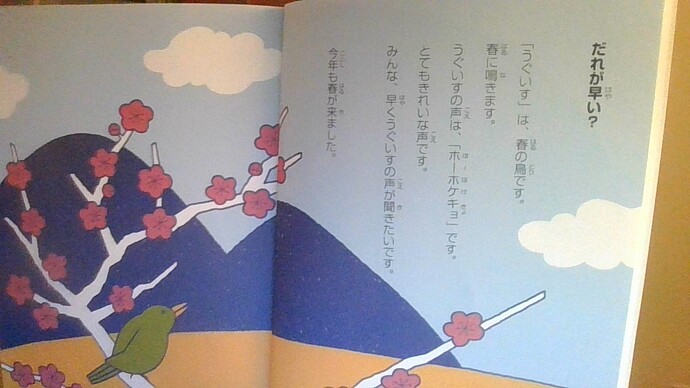 Today I finished デスノート ・ Death Note 📓 Vol. 2 just in time for the end of the challenge

Now I’m only behind for the 佐賀のがばいばあちゃん 👵🏼 (Intermediate Book Club) but I’ll have to catch up with that one later. I think I’ll just read some ヨコハマ買い出し紀行 🛵 Volume 6 tomorrow

Just for the fun of it some interesting words that I’ve been finding lately (various sources):
暗算 - mental arithmetic
肝心 - essential, crucial (as the 大辞林 explains it, the heart and liver are extremely important organs)
山分け - split evenly
子息 - someone else’s son (oh, so you just swap the kanji to indicate that it’s not your own son?

)
お手柔らか - please go easy on me

Traveling remains more difficult to find consistent time to read, but I am now 70% done with 心霊探偵八雲1. I asked a tutor last night if it was aimed at kids because it feels incredibly easy to read (compared to many other novels I’ve read) and they said it was probably for high school students or thereabouts. Makes sense.

I kind of wonder if the intermediate book club would enjoy it or if it’d be too dark. Then again one of the book clubs is reading Death Note and if the movie I watched is any indication that’s hardly sunshine and roses.

I read Chapter 22 of Mitsuboshi Colors today. It was about hayfever, which was nice as it reminded me of a conversation I had with my tutor last year about hayfever

I’m quite sad that its the last day of the challenge tomorrow - is anybody planning to carry on posting throughout June too?

Actually got packing and stuff done today, so was a bit busy.

Finished chapter 19. Thoughts: First we get to experience Maomao’s father’s point of view of the garden party

Might be first time? I can’t remember. Seems like he only views people as pieces on a shogi board. And he doesn’t relate to seeing pretty people as pretty. That’s kinda interesting, he’s like "yoku wakaranai

". Second half, I think it was Jinshi’s point of view? Maomao encounters father and challenges him to a game of shougi

Turns out he, as the military strategist, never loses a game of shougi, but Maomao knows how to beat him. That was fun. Turns out he’s super weak to alcohol.

?
yes hello doctor, my tummy has the aches. Oh, so the cure is revenge, you say? Okie, if that will make me better shouganai desune

10,000 characters read again today! This was also the point where the VN clearly tried to steer to a bit of character development and making Shiki more likeable, so it was generally a nicer read, haha. 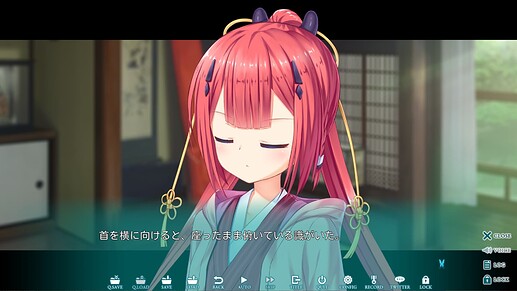 In two days, the day the challenge is over, it’ll be the real, exact mark of me having done this for a year! Celebrated in my study log a little early after that practice test. I’ve done at least some studying every single day, so that’s pretty cool. I also have gone very slightly ahead of schedule to finish up 佐賀のがばいばあちゃん, so I think by tonight or tomorrow I’ll be able to officially say that just under the wire, I finished 3 books in this year. Summer Pockets will be a little late.

Cool word I want to share: 夢うつつ (ゆめうつつ), sounds like it describes the state of being sort of half between dream and reality, struggling to distinguish them.

Read another reader waiting for a friend. We then finished Belle. It was… interesting. Glad I could see it from the comfort of my home.

Completed all four volumes just in time for the end of this spring autumn challenge. Coincidentially, this is probably the manga I enjoyed the most among everything I’ve read these last two months.

Sadly I can’t properly represent how hilarious this panel is in context without getting into spoilers. 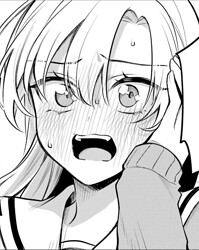 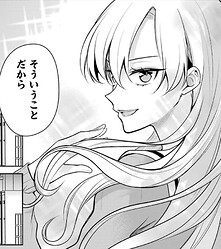 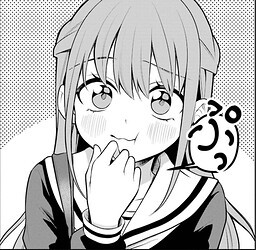 主人公さん failing to contain her laughter 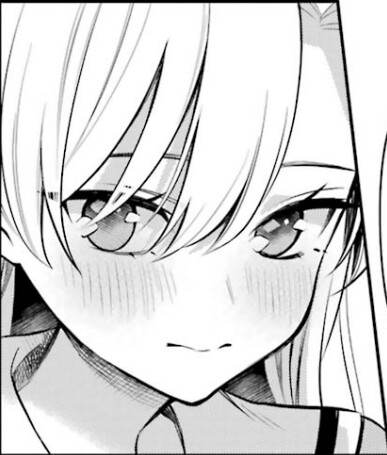 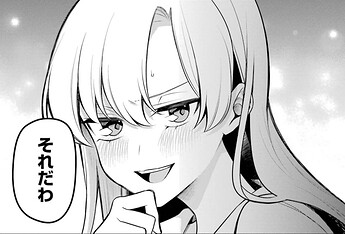 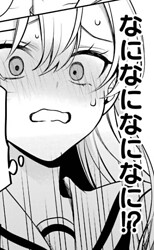 I am going to miss these two too much. I am also really sad the author doesn’t seem to have any other series yet. sad cat noises

Interesting expression I ran into:

Need to figure out what to read for the final day of the challenge… haven’t quite decided yet.

Today I finished up chapter 1 of のカフカ and played a little AI: The Somnium Files. My brain wasn’t super on top of it today

のカフカ felt a bit harder than it has but I think that was just me. It’s almost the end of the official challenge huh; hopefully I can end on a strong note tomorrow!

is anybody planning to carry on posting throughout June too?

Odds are good I’ll still be here, it feels too much a part of the process now

We then finished Belle. It was… interesting.

I didn’t watch it in Japanese (I can’t even imagine, I was lost anyway) but yeah it was a time lmao, I’m not sure I knew what was actually going on even once but it was pretty!

I only managed about 4 pages of 海辺 yesterday and not much else. Apparently I was more deficient in sleep than I thought, because I fell asleep in the afternoon. Anyway, this was the first time I had ever seen コンビニエンス・ストア spelled out and not just shortened to コンビニ.

About a magical basket full of drink and food that descends from the skies. But one day an even bigger basket falls down full of monsters.

Finished the cruise arc in spy x family, ends on a good note. It had a lot of moving parts and action, which makes it harder to find a natural stop point. I ended up reading more chapters and looking up less words then usual. The rest of volume 9 is a collection of different stories again, so I’ll probably take it easy finishing it.

This completes two months of reading for this challenge. Not sure if I’ll keep reading every day in June, but I expect to still read plenty.

In short: I liked the book. Will probably get back to this series later at some point. Definitely learned a ton of new words from this series.

I’ll write an end of challenge summary post later, though if other people are going to continue posting I might as well continue too

Read two chapters of ヨコハマ買い出し紀行 🛵 Volume 6 and they were laid-back and full of love as usual, although those sunburns after swimming in the sea did not look healthy.

And that’s the last day of May for me. So far, I’ve only missed one day of the challenge because I was too sick to read last Friday

. I’ll continue to read plenty in June, but maybe not every day.

And the Spring Challenge is over!

Thanks to everybody who participated, I had a great time reading all your posts.

Here is my report of the challenge!

In short, I started a lot of books, experimented a bit (also with books in other languages which was a very nice twist), and managed to finish two books. (And started even more books.)

Unfortunately I need to report that I did miss one day: May 28th. My excuse is that I travelled with a Japanese friend on that day, so I basically spoke and listened to Japanese all day (from morning till night), so maybe this makes up for it a little bit

Next up: I will continue to read basically every day, just like usual. I’ll update my report accordingly, but I don’t know how much I’ll comment here (I’m not a regular poster in here anyways, so…). A few (or a few more) interesting book clubs are coming up, so there will be plenty material for me to indulge in!
See you all again in July?!