I’ve got about a two and a half hour round trip commute to and from work everyday, and have been using some of it to listen to Japanese podcasts.

But, I feel like I’d rather use the time speaking a bit. I know about italki and hellotalk and understand that those would be best in the long run, but I would rather not do them during a commute. (I think it would be rude, and maybe a bit dangerous)

Basically, what I am looking to do is spend the time saying things in Japanese to get the muscle memory developed since I speak so infrequently. My vocabulary and grammar are decent, I think. So, I’ve used “the cut tongue sparrow” on Spotify, which says a phrase, and then pauses for you to repeat it. I liked that a lot. I also was able to use volume one, lessons 1-5 of Pimsleur for free from my local library and also liked that.

I’m looking to continue down that path or a similar one but, despite the job, I am as Marge Simpson would say “poorer than a poet before payday” and the full Pimsleur course costs around $500.

Any suggestions? Can anyone recommend anything similar for free or low cost?

They might have Pimsleur in your local library. I really suggest you check it out!

There’s a book series called shadowing. I heard decent things about it. The conversations are pretty realistic from what i can see. 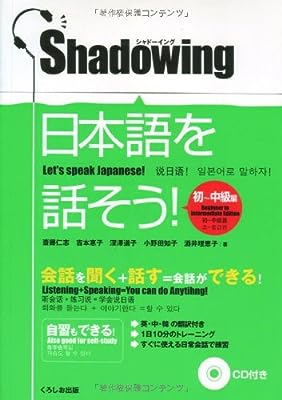 Mango Languages is a language course that is offered through public libraries! If you have a library card, check if your library offers it. It’s meant for speaking and listening practice. Some people don’t like it because it’s extremely repetitive and simple, but that’s kind of the point. It helps with practicing pronunciation and intonation and sentence building. I like to use it while driving. There are 20 chapters that cover beginner Japanese and maybe some intermediate? And they also have an actual Japanese film that you can watch and interact with to tie everything together. You can watch scene by scene and have the dialogue broken down with color coded kanji/kana/romaji/english, as well as grammar and culture notes. Also, weird fun fact: the English narrator for the course is the original voice actress of Ash from Pokemon!