I am wondering how do you learn some japanese dialect especially some of the harder ones or uncommon.
I have a friend who is interested in learning japanese dialects. Since i am not expert al all. I wanted to know what you guys think. He doesn’t live in japan unfortunately.
Beside speak with natives what can he do to study or practice it.
Thanks in advance.

Depends which accent. Outside of Kansai-Ben, there isn’t a whole lot outside of Japan that I know of. Even Erased, which was set in Hokkaido doesn’t seem to have a whole lot of that accent in it.

I meant he isn’t learning it in japan. I believe he want learn to tsuguru and oita

You can search jisho for words tagged with a specific dialect. For example, searching the #thb tag will give you some Touhoku dialect entries. #words #thb - Jisho.org
The search options page has a complete list of hashtags (Search Options - Jisho.org)

I don’t know anything about Japanese dialects, but my native language is Norwegian, and we have lots and lots of dialects.

I think if you want to learn a specific dialect, the best thing is to talk with natives and try to mimic what they say. The second best thing is to shadow natives (listen to a recording and repeat what they say). My suggestion would be to find some audio material where the speaker speaks the dialect he wants to learn (YouTube video, podcast, whatever) and shadow from that.

If sounding authentic is a goal, it’s probably better go with a youtuber or streamer. People speaking naturally. In media like movies and such, accents can sometimes be a more sanitized, mainstream version, so that it can be widely understood.

That’s how it is here, at least. Wouldn’t be surprised if it’s the same on Japanese television.

Nothing beats learning it from a native speaker. If living in the dialect region isn’t an option, it’s possible to ask for dialect lessons from a tutor on italki. My tutor said that some people ask her to teach Hiroshima dialect.

It may be a challenge to find a tutor who is native in a specific dialect if it’s rather uncommon. Besides, it seems that younger people are leaning towards the standard dialect, and only the older generation would speak in a proper dialect.

May I ask why your friend wants to learn some obscure dialect? And are they fluent in Japanese already? I bet it’s much easier to find dialect hints in Japanese.

They are awesome! There is so much going on!

I suggest getting some audio of real people speaking in their respective dialects, because that’s how I’ve learned to recognize different Japanese dialects (as far as I can).

But, speaking them is a wholly different beast. Just think about your own native language! I don’t believe you can learn dialects as a skill unless you live in a specific region that has that dialect. So, to learn that skill, you really need to immerse yourself in the dialect at all times, well, live there.*

I guess, there are also professional dialect coaches out there that can help - but that comes at a cost. And that’s usually for people who are actors! So, I don’t know if a normal person can get that kind of coaching or if it’s available to the general public. (it seems farfetched, but what do I know).

But, listening to Japanese people speak is a fully doable thing and you just need to get various Japanese media (audio recordings of some kind) and expose yourself to the dialect in question. That’s the easiest way to learn about dialects - listening and imitation.

*after 30 it is less likely for you to change your own dialect and I suspect it’s the same for secondary languages (speculative). It doesn’t become a speaking habit as easily after your 20s.

Some rural Japanese dialects are more or less incomprehensible, just saying. They are very different in choice of wording and speaking-“quirks”.

Some of the more simpler to understand dialects is for example the Tokyo dialect which pronounce し and ひ both as し. So, that can get confusing!

Other dialects have (I don’t know the grammatical term for it), like add-ons or twist of words. Like, instead of answering affirmatively そう、だ it becomes そうだら! Or negatively: someone not being home, for example, いない, instead becomes いにゃ (this is Shizuoka-ben 静岡県 that the voice actor Horiuchi Kenyuu speaks).

Just some examples that I’ve noticed from Japanese voice actors, when they talk as themselves.

That’s all for now!

Things like Kansai-ben have textbooks you can use, but I can’t imagine that’s the case for many other dialects. There just isn’t a big enough market.

He’s japanese is better than mine. But i don’t think he is at a level to use japanese dictionaries. He likes dialects that why he want to learn them (aka they sound cool)

If there’s no real reason other that “dialects sound cool”, then your friend should just try learning Kansai dialect. It’s also cool, and a realistic goal too.

Even if they manage to learn some obscure dialect they would have no one to talk to. Most Japanese speakers would have a hard time understanding the dialect. Besides, most likely the your fiend will sound very unnatural because there’s so few resources available and they can’t talk to the natives.

Which is a perfectly good reason. But, as I mentioned, Japanese media is not a great tutor for this, while you might encounters some stuff. There was that anime about a man doing professional calligraphy, which showcased some rare dialects (as the character settles down in rural Japan). But, otherwise, getting audio of real people talking is probably the way to go! ^^

Even natives struggle with dialects and certainly don’t know the subtleties of each regions. If you are learning to broaden a scope of listening and be more attuned, that is one thing. Comprehension can hard enough so I find following thick dialects pretty frustrating and even disheartening at times (what have I been learning?!). However, it is interesting to learn some of the drastic intonations and local phrases though.

But I find it annoying when learners start inserting dialect as a novelty and expect to be understood outside its region. It would be like listening to a Japanese person learning English and they want to use a Jamaican accent/dialect while living in New Zealand.

I believe the friend of OP is more interested in dialects as a thing, than how to speak them themselves at this point. But, I might be wrong, because your point is spot on. Dialects are for natives - not for anyone else to emulate (unless actor). It’s a very weird human behavior to go into a community and faking the dialect from the start!

I’ve been studying Osaka-ben and Hiroshima-ben on the side. Most dialects have a pretty detailed article about them on the Japanese Wikipedia. Or you can just Google for some pretty good websites on them.

My thought as well. But, originally, I felt the question was about how to learn dialects - for use.

I mean, why else study it intentionally, since it’s something you’ll get inadvertently indoctrinated in when moving to a particular place on Earth. It’s not necessary to do in consciously unless you’re an actor.

I find Kyushu dialects, or perhaps more specifically Hakata-ben and dialects that are similar to it, very aesthetically pleasing (perhaps in a Tolkien-esque way if anyone’s familiar with his attitudes towards language aesthetics?), and have been studying it on the side just for fun. I second Japanese Wikipedia as a helpful resource. Weblio also has a lot iirc: Weblio 方言. This is like google translate but for standard Japanese to dialects: https://www.8toch.net/translate/. Here is another page that has some grammar from various dialects in English: https://hougen.u-biq.org.

I am reading a couple manga that have lots of characters that speak Hakata-ben or similar dialects, which is where I get most of my exposure. I just find it so delightful! I have noticed, however, from talking to natives and trying to use it, while they might find it cool that you want to learn their dialect, and many can be quite supportive, dialects are considered a very personal thing, and one can come off as even more of an outsider or even a poser by trying to learn them. If you want to speak a dialect, I think you pretty much have to be an active member of that language community. It raises a very neat idea about the point of learning languages, and how almost necessarily community-oriented it is. Living in rural North America, that is something I have often forgotten, so my dabbling in Hakata-ben has been quite humbling (in the most rewarding sense of the word).

I meant he isn’t learning it in japan.

Yeah that’s what I meant. Outside of Japan, most media is in Tokyo-ben or Kansai-ben.

That’s the biggest difficulty. I like accents too and outside of interviews of people from specific area, it’s hard to find content.

Your best best is to find a YouTube channel by someone in the region to watch.

Can I ask why Hiroshima-ben? Just curious.

@Stay_coolXD
I happened to find out about a whole Kansai course today while watching a lesson. It’s a collaboration between the guy who does Japanese From Zero and a Kansai dialect speaker. However, it’s not for beginner speakers, but if you’ve watched and understood the content of the first 90 videos in the Japanese From Zero series, the maker says you should be able to start with the Kansai lessons.

There are dialect playing cards as well for slightly more obscure dialects. They have the standard Japanese and the dialect version on each card. These aren’t for beginners either though. 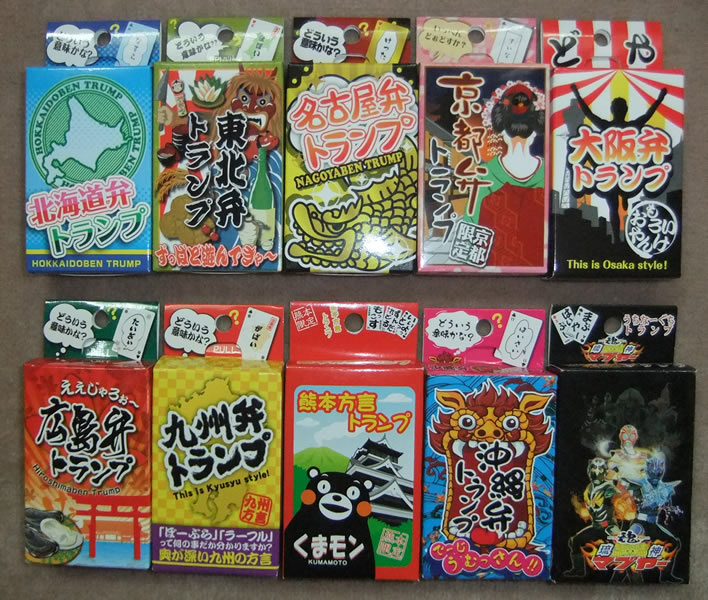