I get confused between certain words again and again

Is there a way to note down that these are the ones that I get confused between? Maybe someway to do a review of the confusing pair together. That way I can repeat the difference together. Something like “saigo is last. sugu is immediately.”. These are two words I am getting confused in my Anki deck. But the same problem happens with some pairs in wanikani.

Try to make own mnemonics for the specific words. I had severe problems with 下がる and 下げる at first. Then I realised that 下がる is “To fall”. sagaru, fall. They both have an “a” in there. Since then I haven’t mixed them up.
You can actually use the exact same rule for saigu and sugu. saigu - last.
After a while you won’t need the rule anymore to remember the difference.

It might be a matter of developing vocabulary to see bigger patterns; the “sai” in “saigo” is the superlative: saigo (last) saisho (first) saitei (worst) saikou (best)–and picking up the kanji will help distinguish words. With only 50 sounds, learning kanji can help distinguish homonyms.

And sometimes a mnemonic really helps a lot. I couldn’t keep the kanji for left and right (hidari and migi) straight until a classmate pointed at the two kanji together and said “migi mouth.” Problem solved.

And sometimes a mnemonic really helps a lot. I couldn’t keep the kanji for left and right (hidari and migi) straight until a classmate pointed at the two kanji together and said “migi mouth.” Problem solved.

My mnemonic comes from my taekwondo lessons way back when. When you bow in taekwondo, you put your right hand in a fist, and wrap the fingers of your left hand around it, and so to me, the ロ in 右 looks like a fist (for the right hand), and the エ in 左 looks like splayed fingers (for the left).

This happened to me to. I keep mixing up 欠ける and 欠かす. I made a mnemonic like “Kakeru - Lackeru” and “Kakasu - Miss”. It has helped me somewhat.

You can actually use the exact same rule for saigu and sugu. s a igu - l a st.

For the rest, it’s correct, it’s called transitivity, doing something vs something happening, it’s not a 100% always right rule, but it’s worth knowing about, for this, I’m afraid you just have to remember, though using kanji is much more logical and you don’t need rules for this: 最 = さい = most, it’s used as a prefix, the most behind, is the last, same thing applies for the best, the worst, etc…

I make little squares that have similar kanji or words in them. The two axes are the changes - might be a transitivity pair on one axis with a similar kanji on the other. Etc. This helps my brain process the differences. 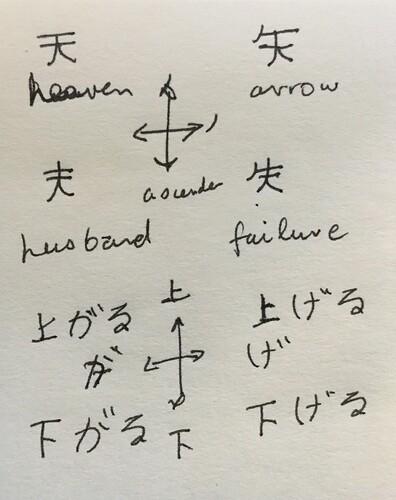 Maybe it helps you? I have loads of PostIts like this, maybe it is also the writing down that helps.

I had severe problems with 下がる and 下げる at first.

Verbs that end with ～す (or ～せる) are almost always transitive, just like する is transitive.
Examples:

These are all vocabulary words from the first 10 levels in WK. In those 10 levels, the only exceptions to these trends that I see are (coincidentally both in Level 10):

Most verb pairs have a verb with an ～える sound at the end, like 止める, 当てる, 終える, 出る for example. These verbs just flip the transitivity of their partner verb.

I don’t know if this applies to your problem, but for me one of the weaknesses of Wanikani is that it doesn’t give mnemonics for verb endings, just the kanji parts. So I make my own mnemonics for every part of the word and that helps me distinguish verbs that use the same kanji.

I don’t know if this applies to your problem, but for me one of the weaknesses of Wanikani is that it doesn’t give mnemonics for verb endings, just the kanji parts.

Oh, quite. The worst of these has got to be the 続ける and 続く transitive/intransitive pair, which literally has “Unfortunately, there’s no good way to differentiate the two “continues” using just the meaning” in the mnemonic box. Uh, actually Koichi, it’s pretty simple: one of them means “to continue something” and one of them means “something continues”.

Watch your tone against Koichi, He will smite you.

As far as I know, the last strokes of both 右and 左 go from left to right. The second strokes however, point the direction you want. Incidentally, that’s how I remembered the somewhat irregular stroke order.

As far as I know, the last strokes of both 右and 左 go from left to right.

The final stroke of the hiragana.

Aahh, that possibility did not even cross my mind.

honestly this has been the most helpful thing I’ve found on transitive/intransitive verbs (that suru is transitive and aru is intransitive)! Thanks so much for that haha my grammar book didn’t even mention it and I’ve been struggling for a while.

@anshbansal As for remembering vocabulary that are similar/difficult for me to differentiate, I suggest looking up several example sentences and their translations. Make a little side by side note for the two words you mix up, and then you’ll see the difference in the usage.

Yeah, those realizations completely trivialized Japanese transitivity for me.
They come from this video: Lesson 15: Transitivity- the 3 facts that make it easy

What surprises me is how little-known these patterns seem to be; as @Belthazar mentioned earlier, even Wanikani’s mnemonics are basically like, “lol I dunno just deal with it.”

I don’t know if this applies to your problem, but for me one of the weaknesses of Wanikani