Do you know how often will the kanji and vocab appear?

For example, I’m now a time level 2, and eventually as I level up to say 20, will those that I learned at level 1 or 2 still appear to test me? If not, how do I set it?

I also noted that as I answer correctly, the kanji or vocab gets leveled up to guru, master, etc… how will it ever gets to enlightenment? And what happen when it does?

WaniKani’s SRS spans across nine stages, which are split across five groups. 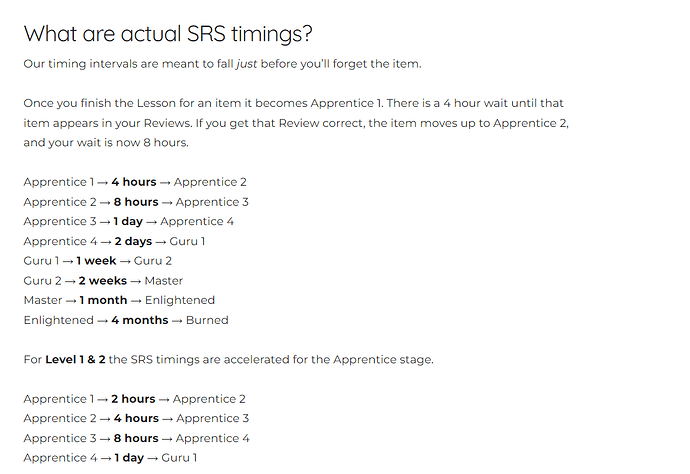 The schedule for any item is independent of your overall level. Each item follows the above schedule on its own.

So, adding to what Leebo said, you’ll see each item 8 times if you get it right 100% of the time, plus 1 or 2 additional times for each time you get it wrong.

If you do all of your reviews daily, you’ll see an item periodically for about 6 months. When you get it wrong, that time gets longer.

Thanks! I see that it get downgraded to Apprenctice level if I get it wrong.

I dont mind it get repeated at all, like everyone once in 6 months of so even if I get it 100% of the time.

More worried that it will never appear again, and if I dont use it at all, I wont even know that I’d forgotten about them! So a timely appearance is always a welcome refresher!

After you start burning items, you have the option to do study them yourself at any point if you wish.

If you need to review burned items, chances are that you aren’t getting enough immersion.

I dont mind it get repeated at all, like everyone once in 6 months of so even if I get it 100% of the time.

So, the downside to an SRS setup where the repeat interval caps at six months and things never get ‘burned’ and leave the system is that it commits you to a continuous workload. There are over 8500 items in WK; to review every one every six months is 47 reviews a day assuming you never get them wrong. That’s not unworkable in itself, but the problem is it leaves you a lot less room for future learning.

Personally I like SRS systems that just push the interval out and out, so you might end up with an item that’s going to come up for review in five years. But the general idea is the same: you need to have your review time free for things you’re learning now, not clogged up by things you learned years ago.

I see what u mean! When the number of reviews adds up, it’s gonna be crazy!

I see your point, but some of the words that Wanikani chooses aren’t always that common. Like I live in Japan and read manga and the news, but I have never once seen 弱々しい for example. Even my Japanese co-workers were confused that I had to learn that word.

plus 1 or 2 additional times for each time you get it wrong.

2 or 3 times actually, if it gets pushed down by a level, you need to see it once to get it back to where it was then again to advance it further

Even less reason to keep reviewing it. Obviously isn’t much of an important word in that case. WK should be one of the stepping stones to get into immersion, where the real learning is. If one is starting to review burned items it sounds like you’re studying WK more than japanese itself.

That’s fair, but on the other hand I think reviewing burned items can be a good supplement to immersion. For me, its a good way to go over items that you may have forgotten. I’m not saying that you should go over burned items all the time, but every once in a great while to check for retention isn’t a bad thing.