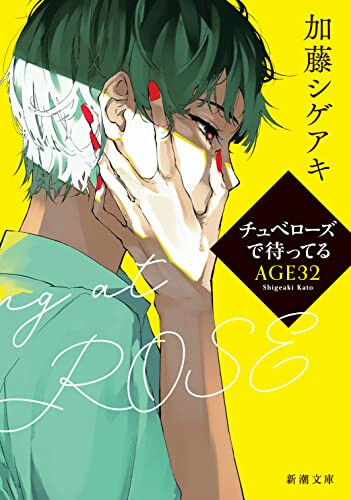 This thread contains the discussion for chapters 34-40.

(my apologies, the thread switch is in an incredibly bad spot

Now what a scene… The poor fishies, though. But this wimp in a strong man‘s body didn’t deserve any better, I guess. The only thing I found a bit weird is that he simply told him to stick out his hands, and he could tie them. I mean, sure, with the tear gas and all, but I didn’t expect him to follow suit so willingly…
Everything else was just a feast

And they got all they needed to know, really. What a perv

ユースケ is a dangerous psychopath. And so is 八千草 (as if we didn’t know), in a different way. Apparently there’s more to find out, but meanwhile, is there any way 加賀宮 won’t know 光汰 was involved? I’m expecting the whole company to go up in flames by the end of the book.

OK, lesson learned: It’s not a good idea for me to mix books right now. Dunno why, but as soon as I mentally switch to another story thread, I seem to lose them both

Anyways, back on track and finished the chapter.
Yuusuke is definitely completely unhinged. Even worse than I had feared.

And of course, nobody can “afford” to call the police to untangle this rut. We need to see this through, seems to be the bitter reality.
So Yuusuke wants to find out why the boss did this to Mitsuko. I found it interesting that Kouta somehow started to lose the feeling of her reality having been real, if that makes any sense. I mean, it has been a few years, and their relationship was very short, and mainly determined by “unloading”, as he described in this chapter. So I can totally relate to his feeling. What was really interesting was that the touch of his boss’ hand brought her memory back to him so vividly. Let’s see how this situation will unfold.

Oh boy, this is getting ever more ridiculous! So Yuusuke and the boss meet at the bar, first of all Kouta gets a confession from the boss, but then Yuusuke jumps in and starts a fight. But it turns out the boss is a boxer, so Yuusuke has a hard time winning, but finally the stun gun helps. But then it turns out that the boss is - remote controlled through his earphone that he always wears! And of course by none other than the mysterious dude in the mysterious room, who turns out to be his older brother who has a scarred and deformed face since birth and through necessary operations. And of course the boss lets himself be controlled because he has issues understanding how to behave in the “normal” world. OMG

I‘d say that describes it perfectly

I could have written several paragraphs of my thoughts, but really, I think this visual summary said it best.

I think the author should have decided what kind of book he wanted to write beforehand, and communicate it with the reading public somehow. This isn’t a book about a host club any more at all. This isn’t even a book about facing your past. It briefly touched chaotic violence crime novel (that was fun), and then it went light-sf hard. With some absurd drama to boot. So one brother is so ugly he won’t present his face in society (even though we’re ten years in the future, he could have done nothing about it if it bothers him? not even build himself into a chair?) and the other brother may be on the spectrum or has something else going on that makes him socially inept and even dangerous. So one brother controls the other in real time using camera glasses and earphones? Riiiight. And the brother who never knows how to act on his own, can suddenly instantly act convincingly on his brother’s instructions? Does he also instruct on body language? On facial expression?

I guess I now get why we dwelled on that stupid game so much. Digital holograms vs human puppets, sure, okay.

This chapter was at least double the length of the other chapters. And it was a rollercoaster right to the end.

After accepting the new reality we were suddenly thrown in, is got fun again. I kept wanting to comment as I read, then things changed and changed again. First of all, 八千草 running around like a broken robot was hilarious. The book is a comedy after all. And imagining him having sex while never ever taking his glasses and earphones off!

Second, I was so annoyed by the attempt to get all philosophical about free will all of a sudden. Someone is telling you he has been controlling your boss all along, the same boss who had been in a relationship with 美津子, and instead of immediately asking how that worked out exactly, you ask about him being happy not having free will. Sure.

But the twist! Once I accepted all this craziness, the twist was delicious. I like elaborate revenge schemes and extreme manipulation of unsuspecting victims in fiction (unrealistic as it is), and finally 美津子 is not pitiful any more (although I still don’t exactly get the revenge she had in mind). Anyone else believe she may be alive after all? Meanwhile, will we ever find 芽々again? Or will she die in ユースケ’s basement somewhere?

So I guess several of the things that stood out to me as absurd throughout the book were “explained” after all. The crazy performance by 八千草 in the competitor’s office. 美津子’s excessive selflessness and insistence on helping 光汰. 光汰’s effortless success in his new company life.

By the way, I was all set to complain about how the two brothers story and the meaning of free will felt like the author had too many ideas and he just tried to fit them in one book. I would totally have respected it as a standalone short story, but I felt it didn’t fit at all here, given the setup so far. But then it turned out this was just part of the setup too, and the spotlight is again on 美津子. I’ll reserve judgement until I’ve finished reading, but for now I can say that the balance of the book has been very lopsided, and while surprises are fun, it has been way too misleading on what kind of book we’ve been reading (still unsure, to be honest).

The end is near! I hope I can find time to finish this today.

So everything turned out pretty much perfect for 光汰!? The car crash stopped 加賀宮 who was coming for revenge, 芽々 was never in any harm, ユースケ is slowly recovering, 八千草 is accused for his brother’s murder yet not criminally responsible due to mental health issues, and 光汰, suspiciously linked to everyone involved through work at the very least, is (for now?) in the clear. Manipulated or not, he’s been quite lucky in his life. Now to see what that mysterious USB is all about…

So everything turned out pretty much perfect for 光汰!?

Plus, Meme is in love…
I guess Hollywood would be really jealous if they knew about this book’s plot!

Now on to the last chapter!

The ending felt… cheesy, actually. I’m not sure what the author wanted to say exactly. It all felt very much all over the place. I won’t even talk about how a 10 year old video could be flawlessly turned into a hologram on the spot, when I can’t even open text documents from a decade ago without trouble. So 光汰 had been captive (hands around throat, dog collar) since the end of the last book, and has now been “released” at the end of this one. Because a hologram of a dead person (called it, but still ridiculous) told him she chose to die at the moment of extreme happiness because she had loved him.

And what was that “revenge” after all? That she got to implement her ideas even if they demoted her? That she made it obvious to the world that you can control human beings as you can control hologram avatars? So much eyerolling. What was the whole point of the two brothers? What was the point of anything? Anyway, the second book was boring for the first two thirds, then turned into a trashy entertainment novel (fun to read, but also ridiculous and over the top), then tried to tie it all up in a supposedly deep, philosophical, but basically sentimental way that in no way worked for me. But okay.

I finished yesterday as well. But I was too confused to write something about it … actually still am, I guess

This probably covers it best.

Quite the drama queen, eh? And such a selfish brat…

Anyway, the second book was boring for the first two thirds, then turned into a trashy entertainment novel (fun to read, but also ridiculous and over the top), then tried to tie it all up in a supposedly deep, philosophical, but basically sentimental way that in no way worked for me

Yep, same sentiment. I mean, the sentimental end in and of itself would have worked out for me as the end of a “normal”, somewhat emotional book, but together with these trash scenes all along, it was just a no-go.

And so many questions remain. Like, how did the younger brother manage to live for the first umpteen years if apparently at the end he was not even able to walk without being directed? How did the controlling work out in conversations? If he was told every single thing he said, there must have been an incredible delay. Yet he seemed to be successful.

Then, he came up with some slightly futuristic ideas but on the other hand things were so underdeveloped (like why did the older brother not get plastic surgery, as was discussed before).

So my overall verdict is that I really liked the first book (although we get a glimpse on what is to come through the ridiculous “Shizuku comes back” scene we discussed before) but really disliked the second one. This makes me look at that Youtuber’s recommendations in a whole different light

I decided quite early that this wasn’t a pair of books I wanted to read (and tracking the threads has not made me change my mind), but I have been really enjoying all the plot summaries and reactions everybody has been posting here, so thanks to all of you for those!

I’m glad we could entertain you

You may have had more fun that we had actually reading it.

enjoying all the plot summaries and reactions

Oh speaking of which, I wanted to find out what Japanese readers think of this, and so I checked Bookmeter. While a few comments said they liked it and so on, there were also these two which I really enjoyed: 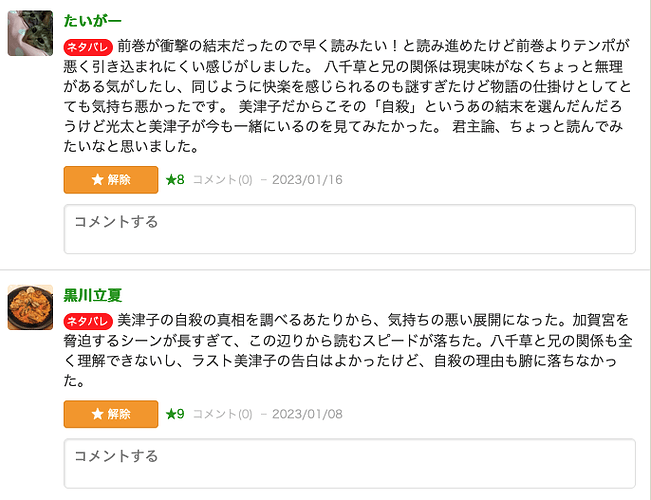