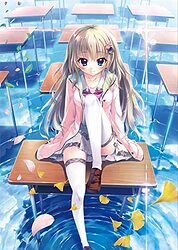 We’re aiming to read approximately 10-12.5k characters per week! A suitable enough end point will be selected each week (feel free if you have a texthooker and it hasn’t been posted yet!) and posted within the thread. @ccookf has helpfully begun compiling a spreadsheet to display progress through the days:

Overall I think I went dumb with this reading as most of Sora’s discussion and speaking habits just kind of broke me. It was really cool to see that she had joined the gang and was also an artifact user though. Continuing the train of fails at one point I think Kakeru referred to someone using こいつ and I have no idea how, but I thought of a character that wasn’t even in the room. It took me a few lines to realize I had really gone off the rails there. Plus there was more setting/background being set up like the entire discussion on the Augustia(?) blog which was a really interesting twist on the established lore, but oooh boy did that take a while for me to get through at first. It’s honestly impressive to think that this entire story was written around a whole idea of “shitty anime was actually a legit isekai”

There’s a part of me that’s kind of hoping 2chan \Augustia catches the killer. Perhaps it’s better put as history eventually giving birth to a shitty anime, but I think it’s funnier the first way around especially with the current state of anime content.

I suppose this also answer’s my question from last week about the *ahem* extent of Sophie’s monitoring. When she brought up Kakeru’s unique situation and said she would be observing him I was thinking it would be her sticking around outside of sleeping hours and stuff. It kind of bugs me that she just wasn’t part of the strategy meetup. I thought she would want to be involved in the Parfait Queen situation. Maybe I misunderstood, but in the school incident she knew where the artifact was on the mystery student, right? Wouldn’t she be able to do the same for Parfait Queen without having to get into a direct confrontation?

I shouldn’t have attempted reading the weekly assignment being drowsy today but new week coming tomorrow ;-; . I think I got most of it though, we’re good. I hope blurry details don’t come bite me in the future.