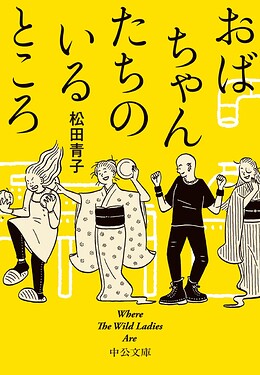 Guidelines When to add an entry If you are reasonably confident of the word itself and the appropriate translation for the context, go for it! If you are unsure of a word's meaning, please feel free to add it, but highlight the row and write...

Everybody should feel free to post and ask questions–it’s what makes book clubs fun! But please do not post until you are familiar with Spoiler Courtesy!

Will you be reading along with us this week?

If you’ve already read this book but are still going to join the discussion, please select “I have read this part.”

Another good one. I kept waiting for the twist/bad end, but it never appeared.

This is the rakugo the story is riffing on, according to the back-of-book sources list. The text in the second box below the pictures is explaining the pun in the punchline and providing some other background info.

What a wholesome story

I looked up the name and websites were saying it was a male name, but then more and more details showed up that made me doubt it lol

I too kept waiting for the twist at the end, but it was just a sweet, straightforward love story after all. I’m happy for them.

I’m a bit behind, but I’ve finally cleared this week.

I enjoyed this story; it was nice and wholesome! Kept waiting for the"gotcha" moment, haha.

Same for me. I think I eventually settled on 繁美 being female, though I guess it’s not really definitively stated anywhere, right?

This is the rakugo the story is riffing on , according to the back-of-book sources list.

Thank you as always!

I think I actually liked this one, at least from about halfway through (after Shigemi’s and Hina’s first encounter), because my brain would finally shut up about things I was having difficulty figuring out and/or that didn’t make sense.

I think I eventually settled on 繁美 being female, though I guess it’s not really definitively stated anywhere, right?

When Shigemi and Yoshi-san (the ‘san’ is also a fairly good indication that Shigemi’s a woman, though men do definitely use it for other men, especially for those older or otherwise of higher status than them) break up, Shigemi decides she’s tired of men and Yoshi that he’s tired of women, plus Shigemi corrects Hina from “Shigemi-dono” to “Shigemi-chan,” and with that on top of her default personal pronoun being 私, I’d say that she’s almost certainly a woman.

I’m wondering, am I the only one who saw Shigemi as a woman from the very beginning?

I’m wondering, am I the only one who saw Shigemi as a woman from the very beginning?

I too saw her as a woman from the beginning, but did doubt my understanding and double-checked a couple of times throughout the story. On the other hand, it never ever occurred to me that Hina-chan might be a bird. I did initially think child, though.

and she… fishes up an entire, intact human skeleton?

If I remember correctly, she fishes up some human bones, not an entire skeleton. She even said that the rest of the bones were never found, I think?

When Shigemi and Yoshi-san break up

Small thing, but I don’t think they were ever in a relationship. They’re just next door neighbours and drinking buddies. The 彼氏 who Shigemi previously lived with and then broke up with before moving here is a different, unnamed, guy.