There appears to be Youglish as well, but I am not sure if there is an API that can be used in UserScript? Also, this is not anime nor movie, but real speech (though, perhaps monologue).

Youglish Japanese I saw this on the /r/LearnJapanese subreddit yesterday, and it seems like something that could be really useful. Type any Japanese word or phrase into the search bar, and it will return a list of YouTube videos containing that word in its Japanese subtitles. It also starts the video shortly before the word is spoken, so that you can listen to it in context. (I assume that it also filters it so that it only lists videos that have marked Japanese as the audio language, but I’m …

I found this from this Discord, btw.

Why are there so few posts in Japanese on WaniKani? WaniKani

@polv https://discord.gg/japanese Eng-jpn discord server. Given how nice the link is, I’m going to guess it’s a public community

The problem with YouTube is just the lack of good subtitled Japanese content on YouTube. Very often you end up with personal vlogs and v-tuber videos that could be mildly interesting, but lack good context (interesting visuals / characters) to reinforce memory.

Visual novels and drama share the same problem, but to a lesser extent. Anime just has this combination of dramatic scenes, poppy colors, and exaggerated intonation that helps you remember the word or the phrase.

Speaking of updating the userscript…I’ve added a ton more anime (and drama) to the API but since this userscript filters by whitelists, all the new content is filtered. Maybe @psdcon can update it when they’re back.

Not to be nitpicky, but it’s about the original website.

Rewinding is easy, and audio is continuous, not chopped to segments.

I know it is impossible to audit every segments to check if vocabularies exist, or in the correct form, but there are some instances Youglish do better.

This is from Homophone Dictionary, but Jisho only has 会う (listing 遭う as an alternative form).

(I have also just noticed the thing about <title> or og:title meta tags, but well, Jisho failed on that too.)

Another important case is, not all Japanese vocabularies have Kanji, nor Kana at all.

Again, somehow, Youglish got this right.

Of course, there are cases that both fail. I can’t think of a good example right now, but the vocab are broken first with MeCab, I guess.

Also, not all vocabularies have Jisho entries, in particular, phrases. Some manual labor might be needed to fix this.

I know it is impossible to audit every segments to check if vocabularies exist, or in the correct form

I also think of using community manual labor, or perhaps only mine, to fix this, even if partially.

Just a quick reply, exact searches are what you want to do for such cases.

It’s noted in the search section. I know most people won’t read it, and I’ve been thinking of adding an exact search toggle. That will make it more obvious.

I would refrain from tagging searches “winning” or “losing”, as it isn’t the case of not returning results but more the case of what is shown and whether that is what the user /learner wants.

From a learner’s perspective, it’s fine to return inflections, for example 泣く could return 泣いた、泣かない. But how about なく？ What should that return? I don’t recall anyone saying there is a problem with jisho.org when they provide 20 entries for なく, or other forms of あう when searching for 遭う, but some find that issue with immersion kit.

On a side note, Sudachi is used, not MeCab.

I agree there are some cases where a different parser or a different search algorithm would make sense, and in fact I have added quite a number of hard mappings on top of the Sudachi parser. I guess if you were to sit someone down for full time summer job and go through the 10k most common vocab parsing that would be helpful to the site.

^ Just raising an example to point out problems with different parsing.

I also think of using community manual labor, or perhaps only mine, to fix this, even if partially.

Well, I already open sourced the early data on Github and Jo Mako has all the data on his public spreadsheet, so you’re welcome to patch the data.

From a learner’s perspective, it’s fine to return inflections

It’s more of Kanji choice, actually. Since this is a Kanji learning site, it can matter.

Also, I didn’t really test the UserScript, so I can’t tell if it would fail, but I don’t think 「」 is a part of the script.

Well, I already open sourced the early data on Github

I would consider making PR. It’s in /resources/*/*/data.json’s word_base_list key, perhaps. I also notice that I don’t really directly need to use the API. Just look at the sound key, and adding your static base URL is enough.

That being said, it is also possible that PR is accepted or not, but I can still make my search engine.

I think it’s fine to return results with とりあい for 取り合い, とにかく for 兎に角, or はずかしめ and 恥ずかしめ for 辱め. I know some might want the exact search result returned, but that is a compromise I think that is better for learning purposes.

Also, I didn’t really test the UserScript, so I can’t tell if it would fail, but I don’t think 「」 is a part of the script.

I’m not responsible for the userscript. For the game gengo textbook, in the “extra examples” section, some items use regular search, some exact search, and some are hand-picked from the database. That is a better approach.

I would consider making PR. It’s in /resources/*/*/data.json 's word_base_list key, perhaps. I also notice that I don’t really directly need to use the API. Just look at the sound key, and adding your static base URL is enough.

Edit: I archived the old repo and added the link to the latest one.

Thank you @Sinyaven and @mathewthe2 for answering the questions in the thread, and for the updates and new titles. You’re awesome!

P.S. @mathewthe2 I won’t implement the sentence length form the API since the user can sort by length, or scroll past the short ones.

sorry if this has been answered before, i’ve done a quick scan and can’t find it

sometimes when new titles get added, all of the other titles which i’d selected in that list get deselected? even though i’d not done anything or even gone into the settings at all. so this time, in the ghibli list everything was fine. the other titles were selected as i’d left them, and the new ones were where they should be. in the (tv) anime list, the new ones had come in, but all of the other ones had been deselected. last time i remember the same thing happening to both lists, not just the one like this time

is this a common thing or is it just me

again, sorry if this has been brought up before

Good question! I’ll be honest, I don’t know how to preserve settings between updates, and I justified it by saying at least if the title choices are lost, this will prompt people to open settings and see the new titles! Not very user friendly, I know.

I’ll do more tests before the next update to see if I can avoid it.

I just came to the forum after thinking that Wanikani context sentences are a bit bland and poorly implemented and stumbled upon this amazing script! Thank you so much for creating this, it really breathes new life into my lessons! And of course also a big thank you to the creators and contributors of immersionkit.com, which I wouldn’t have discovered otherwise.

hi. thank you for the script. i really wanna use this but I don’t know how to navigate to the settings panel where you select anime from. and this settings icon is not clickable 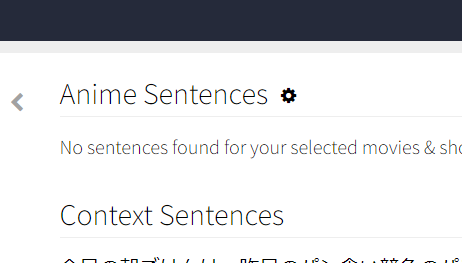 Do you have Open Framework installed? It is necessary for displaying the settings dialog.

that was the problem. thank you so much^^

Is it possible to autoplay the first context sentence’s audio (unless specifically chosen, or opt out), after the voice actor has finished speaking the vocabulary?

Yep i’d love that too, or even have the audio options to automatically open after answering

Hey, this is awesome! I have a few critical suggestions , ranked by order of importance :

Can I make a donation? I love this 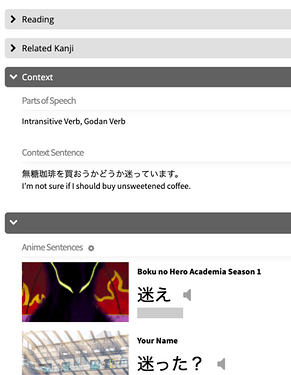 After updating Item Info Injector last week, I was wondering how long it will take until someone mentions the change in one of the dependent scripts.

I have already created a pull request for fixing the problem with the unnamed tab (but this fix still keeps the Anime Sentences section as a separate tab). @psdcon, if you want to place the Anime Sentences section in the Context tab, the append() has to be changed into appendSubsection(). You now also have the option to change notify() [1] into notifyWhenVisible() [2] – both of them work, but have small differences (currently only during the lesson quiz).