I noticed the other day that verbs whose okurigana ends in -iru or -eru are all ichidan, this appears to hold consistently for nearly 300 of the verbs present in WaniKani. The only exception I found was 交じる/混じる.
Is this a real rule? Are there others like it?

I’m a noob so sorry everyone if I say something dumb, but from what I’ve read: yes it’s a real rule… kind of.

Basically if a verb ends with something OTHER than -iru or -eru, it can’t be an ichidan verb. It must be a godan verb (or one of the special verbs, suru or kuru). So at least that part is easy.

But if it does end with -iru or -eru, it could be an ichidan verb… ooorr it could still be a godan verb anyway.

走る for example ends with -iru, but it’s a godan verb.

To be fair, from what I’ve encountered it seems like most -iru and -eru verbs are ichidan verbs. But there are enough exceptions to keep me on my toes. The only way to be able to tell what’s an exception seems to just be straight memorization.

Yeah, yeah, but that’s the stem. I’m talking about the okurigana, like in 食べる and 信じる. Those seem to be 99.99% consistent.

That could explain why べる and る which at first glance seem very similar, are ichidan and godan, respectively.

Ohhh I see what you mean - I missed that before, sorry. When I did some googling on ichidan/godan verbs recently I didn’t see anything that mentioned that. I only ever found “sorry, there’s no way to be sure” answers. I feel like they would bring that up… but I certainly don’t know enough to say no.

For as far as I know, it’s not really a rule, and many exceptions can be found, but it works quite well as a rough guideline if you can’t look the verb up. If a verb ends in eru, it’s probably going to be ichidan. If it ends in iru it’s hard to say which it is, as both ichidan and godan verbs ending in iru appear quite often, usually if the iru part is in okurigana it’s ichidan, but exceptions like じる exist. If it ends in anything else it’s godan.

So there’s not really a perfect rule, so if possible I would check a dictionary. But this works as a rough guideline on what to choose if you don’t have a dictionary on hand.

Looking through Category:Japanese type 1 verbs that end in -iru or -eru - Wiktionary
…there are definitely a few more that have okurigana ( 翔ける, 脂ぎる, 抉じる…). But they do seem to be a lot rarer. Perhaps it has to do with transitivity pairs. I can’t image the standard pairs like く and ける, まる and める, etc. to result in an irregular godan on one of the sides.

Yes, if okurigana has two kana and ends in eru or iru, it is extremely likely to be an 1dan verb.
Actually, in proper modern Japanese spelling, an 1dan verb must have the last two kana out of the kanji.
Well, that doesn’t work for the few verbs that are only two kana long (as otherwise the kanji would have no reading at all, which would be weird). That is why みる is 見る. But note how こころみる (etymologically 心見る) is 試みる, as that one is more than 3 kana long.

The okurigana for group I verbs (五段動詞 godan dōshi, also known as u-verbs) usually begin with the final mora of the dictionary form of the verb.

I don’t think it’s much of a rule. You have to think about the word origins. The word existed before there was kanji for it, so I don’t see how the okurigana usage can give a hint as to how the word is conjugated. From what I noticed, okurigana length (compared to the reading that’s hidden in the kanji) is usually the bare minimum it can get away with without the word being ambiguous. For 交じる you can’t put any more of the reading inside the kanji because you also have 交ぜる and 交ざる. At least that’s the officially accepted version. Over history okurigana usage wasn’t always so neatly decided and many authors used a lot more variation. If you look in jisho.org you can see a lot of words have “irregular okurigana usage”, like: 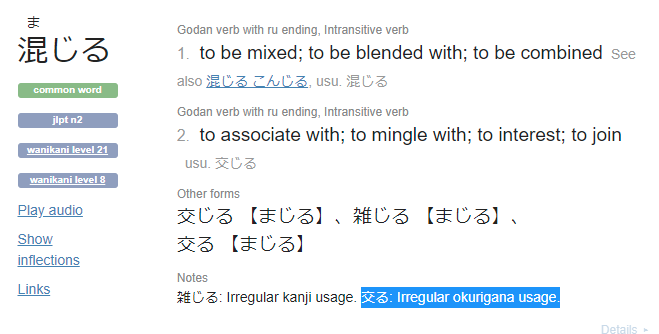 Long story short, I don’t think it’s an exact science that you can use to predict if a verb’s ichidan or godan.