I’m wondering if I understand the usage of these two grammar points. From what I understand, は is used to differentiate the topic and the topic is the thing that the following conversation will be about.

For instance:
“私は_____です” would introduce “I” as the topic and will continue to be what we talk about until myself or someone else brings up another topic using the は+new topic previously introduced.

Meanwhile, が is used to mark the subject within the sentences under that topic (the subject being the thing affected by the verb of the sentence). It also is used when introducing new ideas and thoughts into a conversation.

Am I correct or is there something else I need to add? I know that using が can emphasis the word used before it, but is that used as a substitution for は to mark the topic or is it something else entirely?

From a broad perspective, you seem right on target to me. The biggest difficulties with は vs が are defining what a “topic” and “subject” are and determining when to use one or the other when both are grammatically applicable. I find 好き and the classic problems it causes in romance fiction to be a great example of the two, especially since the Japanese trend of dropping subjects and objects is an absolute pain in these situations.

好きです alone technically means “to be liked.” In almost any basic learning source, we’re taught to use が with 好き and not は, despite は technically being acceptable assuming you understand what it does.「リンゴは好きです」and「リンゴが好きです」are both grammatically sound, but provide two completely different pictures.

The general formula we’re taught is “Person は Object/Person が 好きです.” This, however, is usually translated to “I like _______” because it sounds more natural in English. Learning this way, however, cheats from us early grasping of the topic vs subject concept, in addition to は’s “hidden” purpose.

With「リンゴが好きです」, we have a complete sentence. However, if someone walked up to you and said or randomly spouted out mid-conversation, “Apples are liked,” it would be somewhat confusing, right? In comes “Person は.” Sentences with passive and transitive verbs in general are better for illustrating the difference. Adding “Person は” makes the sentence “Apples are liked by me.” This brilliantly depicts that the person is not the subject of the sentence, whereas “I like apples” misleads English speakers because, grammatically, we are placing ourselves as the subject using a transitive verb and enacted our enjoyment on an object, the apple. は, as you stated, provides our topic (things liked by me). This, however, is only one function of は.

In the other sentence, 「リンゴは好きです」, は is providing two functions. First, it is shifting the subject of conversation. Currently, we don’t have context about what was before this statement, but we now know that the conversation will be talking about apples. The speaker would likely continue by describing the attributes of apples that make them enjoyable.

This contrast is probably one of the more dangerous qualities of は, as using it when referring to a very specific topic can imply a contrast towards anything involved without being spoken. For example, saying 「髪はきれいです」to a girl could imply that her hair is the only thing pretty about her.

が, (assuming you know that it can also be used as a conjunction), is a 格助詞 like を、に、and で, so it behaves much more like a normal particle. As you mentioned, it provides new ideas or thoughts about an unchanging topic. Often times, only one が will need to be used, as any information provided will then therefore be known and no longer necessary to state. I don’t particularly see か as an “emphasis” marker per say, but rather a “clarification” marker.

If someone asks 「だれが皿を壊した」, replying 「私が皿を壊した」isn’t particularly emphasizing yourself, but simply attaching yourself to the verb as the subject. Because in Japanese the subject is often omitted after being clarified, it then feels overbearing to constantly repeat it, hence the emphasis. It’s similar to a common problem English student have in essays where every single sentence starts with “I.” We have to use clauses and other tricks with sentence structure in order to move I later into the sentence, but the Japanese just stop.

For an English example that actually works (not exactly, but the same gist), the questions “Do you _____,” has a similar effects. If someone asks me, “Do you play piano,” I can reply a measure number of ways of varying correctness. “I do play piano” would provide emphasis, “I do” or “I play piano” give clear affirmative, and “Yes” provides a simple affirmative. The similar Japanese responses would be (respectively) 「私がピアノを弾きます」、「ピアノを弾きます」、「弾きます」. While 「はい」 would technically be an equivalent to “Yes,” it can often simply mean recognition of hearing/understanding the question depending on the person you’re talking to.

は introduces the topic (the content in front of the particle is necessary to understand the beginning of the segment of conversation but shouldn’t be necessary from then on), indicates contrast within the same topic, and can indicate a subtle contrast to external things related to the topic but not introduced.

が tells you what is doing the verb and usually never needs to be repeated, as labeling the same information with it multiple times provides automatic emphasis due to its repetition being unnecessary.

Both can be used in a simple statement if the topic itself is doing the verb, and both are required if using a が specific term (好き、嫌い、ある、いる）when the topic shifts. If one is to be used, use が if omitting the information before the particle is necessary for comprehension, use は if the information before the particle moves the conversation in a different direction or contrasts the most recent statement of information (which is usually marked by が).

Sorry for the long post, but I was surprised to see that no one had replied by now! I start making text walls if I get too excited. >w< 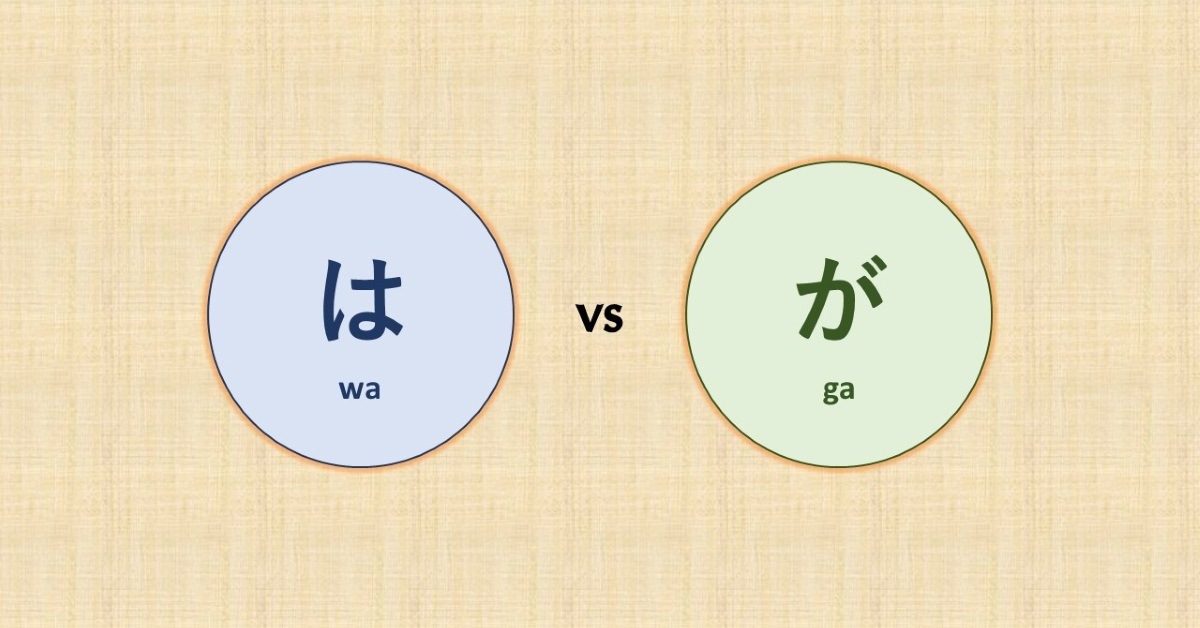 The Difference Between the Particles "wa" and "ga" - 80/20 Japanese

"Wa" and "ga" seem very similar, but they are actually fundamentally different particles. Understand why, and the choice between them becomes much easier.

beat me to it! I really enjoyed this explanation…

I’m glad that I at least understand the basics idea behind は and が. From your explanation I’ve gathered that some of this stuff will just take some practice. So thanks for making a good (long/detailed) explanation of some of the stuff I don’t quite have down!

Ack! I hate when I type phonetically! Thanks for catching that. >.<

Oh, I thought Syphus was bringing up 〜を好き, which is a thing, though I won’t try to explain it since I only have a superficial understanding. I first encountered it in the Japanese dub of Frozen.

Nah if we get into that it’s a lot more complex. This answer is pretty all-inclusive. Basically it’s just about relative clauses.

But what we can get into is that article mentions 格助詞 but it doesn’t mention what は actually is which is a 係助詞, and it’s not alone in this class, も、さえ、こそ、でも、しか all belong to this as well. Also, as a small side note, particles can belong to more than one class. に is both 格助詞 and 並立助詞

I vague know of を being used with 好き as Tokyo slang, but that’s about it, so I can’t really comment much on that possibility either. I’ll have to check out the Frozen dub now, since I’m interested. Currently, I’ve only been subjected to the Japanese version of “Let It Go” in karaoke.

I assume the article only mentioned 格助詞 for the same reason I did; the point is to emphasis that が is more straightforward particle, as it’s grouped with the particles that serve the purpose of indicating the case of the objects in the sentence. 係助詞 are more complicated and identifying は as one doesn’t help with its explanation nearly as much. Though I suppose if someone doesn’t understand was a case means in grammar, mentioning 格助詞 wouldn’t help either.

My two cents, a teacher I had from iTalkie once told me that が also made it that there was no confusion when talking of who is the one executing an action. For example 私はお店を開きました vs 私がお店を開きました were both mean that I opened the store but the が makes it conclusive that I and no one else than I opened the store. I hope this is correct, or at least this is how I understood it.

I hope it is not wrong, because for the first time it really seems to make sense to me.