My brain, sorry for the mistype. Is this a set phrase? After some googling it seems like it is, but I want to confirm.

I’m not sure I understand your question. Jisho says it’s an expression but you can also dissect this expression into two parts :
よけい(な) means unnecessary; needless; uncalled-for
おせわ means help; aid; assistance

Is this a set phrase? After some googling it seems like it is, but I want to confirm.

I’d say yes, in that one can find dictionary entries on it:

“A word for your not needing another’s assistance or an uncalled-for remark.” (Loose translation on my part.)

二人目の仲間の目星 (+は) - the second companion’s aim/objective (but I’m not entirely sure if Luna is talking about the second person Usagi mentions before - Sailor V - or if she’s talking about both Sailor V and Tuxedo Mask?)
もう - soon?
ついてる - I have no idea what つく means here
の - is this an explanatory の? or a pronoun for the companion?

I know what parts of this sentence mean but can’t put it all together. What is くらい doing here? Does しか mean " only" and 取り柄ない mean something like “not worth (it)” and what’s しね?

ママみたいに医者になりたい - I want to become a doctor like (みたい - resembling and に - taking after?) my mom
の - everything written before modifies 頑張らなきゃ I guess?
頑張らなきゃ - have to hang on / give one’s best

page 67
Luna and Usagi are talking about the contents of the CD.

熱中するっていうから期待したのに
I don’t really get what’s being said here. From context I would say they are wondering why everyone is so devoted to this CD (from that hyped and super special seminar) when the questions/problems on the CD are so ordinary/easy…?

目星が付く is a set phrase and means something like ‘figure out’.
I’m missing context since I don’t quite remember and don’t have the book with me, but I think they’re talking about luna/usagi’s objective of finding the second companion.

I think the lack of punctution may be making this hard to parse. I see 3 separate sentences here:
勉強くらいしか取り柄ないしね
ママみたいに医者になりたいの
頑張らなきゃ
しか means only in the way that ‘except for’ means only. There’s no worth to anything except studying.
The し is the one denoting reasoning, the ね the sentence ending particle.
The の also donated reasoning.

I think your understanding is spot on. Specifically they’re saying that they had expectations because everyone was so absorped in studying with that CD, that weren’t fulfilled. (のに) What part are you having trouble with?

It’s Saturday somewhere (Japan), so we’re up to: 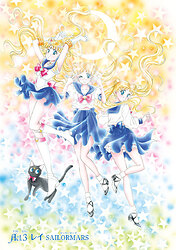 We’re keeping with the same thread for now. Feel free to keep asking any questions you may have in Act.1 and Act.2. Be sure to make use of the [spoiler] tags for anything spoilery, as some readers will still be working through earlier Acts. For any spoilery images, [details] works nicely as well.

S.87 that’s a lot of 6s on that bus. Obviously not suspicious at all

I guess Usagi is Cancer and Sailor Mars Aries then?

Not really a spoiler, but the first page of the next chapter has their info and yes. Yes, they are. I mean, of course they are.

Sailor Mars, yay! As usual I struggled a bit with parsing the pages~ There were a bunch of times in Act.3 specifically where I had no idea who the speech bubbles belonged to. I still felt like I understood what was going on, but it was a little demoralizing.

Also I only just right now realized the origin of クリソツ

It’s surprising to see this one in your list though. You’ve never watched もののけ姫?

I watch enough variety shows that the phenomenon is familiar to me, but I haven’t heard that one! … Or rather, I haven’t heard it and understood it enough even to look it up, which is quite possible.

もののけ, when I saw it in the text my first thought was, oh, like Princess Mononoke! but I actually haven’t watched that ever and I guess subconsciously I thought it was a name. (It’s also that I knew of Princess Mononoke before I started learning Japanese, so in my brain it is in a different box. Now it has been recategorized! It’s a fun word, too, yay.)

Today I did just some regular reading not really getting hung up on what I didn’t understand- which means I read a lot more (yay) and I found I really enjoyed it today and I finished ACT 1. I did not realize how much sailor moon is in my head- because when I’m reading I can hear the voice actors particular moments. I’m probably going to go back and have questions if I reread it, but I think I’m just going to move forward for now and not stress.

edit: I made it to act 3 ! Put me into the caught up category!

@ChristopherFritz I’m not able to add anything to the Act. 3 sheet.

I’m not able to add anything to the Act. 3 sheet.

It’s fixed now. I had protected the first few (header) rows, but somehow instead the first few columns were protected! For now, I just removed all protection on the sheet (so be careful around the header!)

I made it to act 3 ! Put me into the caught up category!

Congrats! I think it’s worth having at least one series that you read through without being too picky on understanding every single world, so long as you get a strong gist of what is going on. If you’re already (at least somewhat) familiar with the material, this is a lot easier to do.

This nice thing about Sailormoon for this is, if you’ve seen either anime adaptation but haven’t read the manga, you can get through the earlier Acts easily enough based on remembering the anime. But later Acts, where the animes diverged more from the manga (especially the original anime), you’ll find you have to pay more attention to follow along, so you get the best of both worlds.

Reactions to Chapter 3 as I first read it:

Kanzenban Act 3 p. 85
Beryl ends a sentence in 出来ておろな what is the おろな doing here?

Arguably, that’s a bit strange, but anyway, she is asking if he has made peace with his maker (liberal translation)

It’s おろうな, which in this case is the volitional form of おる, being used as a presumptive, ending with an equally presumptive な (a more forceful variant of ね). It would correspond with だろう(な) in less old-fashioned speech (as Beryl’s dialogue leans).

“I suppose you’re prepared for what will happen (if you fail)?”

Well, your explanation is much clearer than mine, so there’s something to be said about taking the time