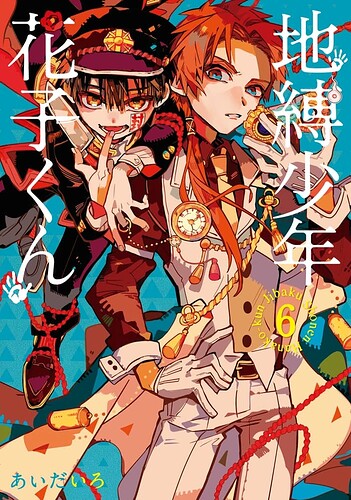 This is the sixth volume of 地縛少年花子くん. The First volume was read as part of the Beginner Book club. You can find the original post for the book club here:

This isn’t exactly an official off-shoot club, more like a relaxed thread where people who decide to continue the series can discuss and ask question on the book. There is no strict schedule so feel free to drop by anytime you want and read at your own pace!

The Story So Far

If you haven’t used Amazon JP before, note that you will need a separate account.

Anyone done with this volume?

P.S: Have you heard the rumor? Apparently there’s a kind senpai in the nowhere still bravely opening doors to find a way out

I’ve just realized someone’s finished the volume? Should I post the thread for volume 7 or are you still reeling for the that twist?

It me. I’m done. There’s no rush to start Vol 7. I can wait. I’ve got a lot on my plate at the moment, so reading has been sort of on the backburn for a little bit!

I’m going to drag this thread back to life.
I may have read the next handful of books without really meaning to

(I think I’m on volume 11 or 12? I need to check. I kinda got looped into just reading and now I’m like wait what lmao)

What kind of questions are we talking about here?

am i missing something or like, they’re in a painting right? the 4th ghost’s one right? is this actually hanako-kun and mitsuba in with them, or is it just fake-them based on what Kou and Nene want to see? I know Hanako’s got feelings for Nene but I didn’t think he’d be the sort to pretend so much like this and now i am just CONFUSED.

I have questions okay i’m not sure if I’m just super lost or if I’m following so far or if I somehow missed something in between one of these volumes.

You aren’t confused. They’re all in Number 4’s painting world.

But there are other things happening in the background that will explain what’s going on and why.

rip that’s what i thought

good to know i’m only slightly confused and not 100% totally lost. guess i’ll figure out my questions by reading more for sure!