What's the deal with this kanji?

極 has this list for one of its vocabulary meanings:
climax; extreme; extremity; culmination; height; zenith; nadir
It’s context-dependent, but it still seems weird for something to mean both “zenith” and “nadir”.
Also the fact that it can mean “Quindecillion”, but that’s another matter. Kanji being assigned very high numbers seems to just be something 日本語 does ¯_(ツ)_/¯
EDIT: Researched the “very high numbers” thing. Got this. 無量大数 meaning 10^68/`10^88 or, looking at the kanji literally, “Immeasurably large number”, just seems pointless. No normal human could ever use a number that large for anything, you’d have to be God or a scientist.

Zenith and nadir are just extensions of the “extremity” meaning, so it’s not that odd. One’s just in one direction and the other’s in the other. ‘Zenith’ even has the secondary definition of “culmination” while ‘nadir’ has one of “the lowest point; point of greatest adversity of despair”

It makes sense to me that 極 can mean both “zenith” and “nadir” since zenith = extremely high while nadir = extremely low. 極 just means extreme, so it could go either way. Also, instead of thinking of a single Kanji as a word, it’s more accurate to think of it as something more like a word root from a romantic language like “pre,” “con” or " ambul." Most of the time, you need groups of 2 or more Kanjis or a Kanji combined with Hiragana to pin down on a precise meaning.

yah, that’s so. It just seems like listing zenith, then immediately listing nadir, when both are assumed in “extremity” already, looks a little strange.

If one thinks that the vocabulary that uses a kanji is what gives “meaning” to the kanji, a long list of “meanings” makes sense.

No normal human could ever use a number that large for anything, you’d have to be God or a scientist.

English has words for pointlessly large numbers too, which aren’t used even by scientists (since scientists invented, well, scientific notation). For example, a vigintillion = 1000*100020 (i.e. 1063).

just seems pointless. No normal human could ever use a number that large for anything, you’d have to be God or a scientist.

I like how you mention a point for it after calling it pointless.

At the end of the day, it doesn’t really matter how many synonyms we can throw at a kanji in English. The thing that matters is what it means in Japanese.

In Japanese it boils down to 4 meanings, 3 of which are very closely related.

English has words for pointlessly large numbers too, which aren’t used even by scientists (since scientists invented, well, scientific notation). For example, a vigintillion = 1000*100020 (i.e. 1063).

No normal human could ever use a number that large for anything, you’d have to be God or Dave Grohl.

Though that’s probably more an artifact of the more general rules we have about how to express very large numbers in English.

I doubt anyone deliberately designed this particular word, but the general system was set up in such a way that people generally agree that if they did encounter that word (even if they never do so), they could figure out what it refers to (let us forget about short vs. long scale for now, lol).

That’s a bit different from Japanese, where specific Kanji were chosen specifically for certain large quantities.

How about googol then

Yeah that one was specifically designed. By a nine year-old.

Nothing compared to Graham’s number, so big that it is とんでもない. (I have underestimated g1 before.) Even so, there are still even larger numbers being named.

The absurb number thing is a buddhist thing if I remember correctly. There’s a whole bunch of these kanji. 正 along with everything else means 10^40 which is equally as pointless and large

I think what I find weird about the numbers thing is that there isn’t at any point a system to use existing kanji to construct terms for these huge numbers. Instead, they just keep assigning kanji orders of magnitude, past the point where this is practical. Surely someone would have thought of some form of scientific notation?

Surely someone would have thought of some form of scientific notation?

Why do that when you can just make a bigger 算盤?

The thing that matters is what it means in Japanese.

If this is the benchmark… The 新字源 has 14 entries for 極: 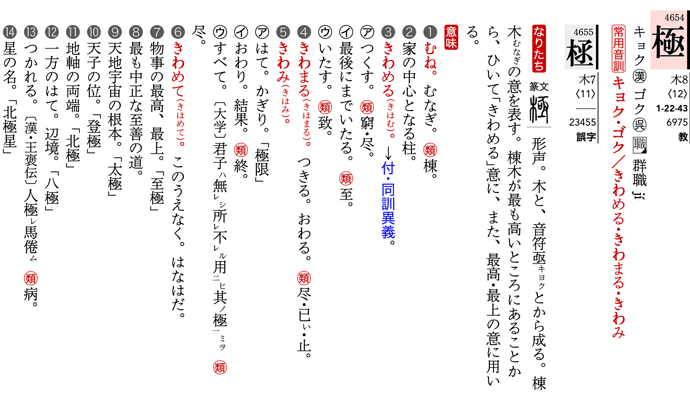 A lot of them seem to just be examples or further narrowing down of the other meanings. Plus what appears to be the original meaning, むなぎ, though I’m not sure it gets used that way in Japanese anymore.

What’s the meaning of 5 of them being highlighted red? They’re basically the ones that kanjipedia mentions plus the original, so I just wonder what significance they ascribe to them.

What’s the meaning of 5 of them being highlighted red?