What do you want now? (Request extensions here)

How does this work? each line is one or what?

Yes. For example, about halfway down the first group (aimed at salaryman husbands) is this one:

“The circled day is both garbage day and my birthday.” (My translation)

Now we come to the difficult bit of the project …

That’s why I said I’d run it through machine translation and just manually review the results.

“The garbage day was circled - it is my birthday.”

I really admire translators. It’s near impossible to capture every nuance.

I think the closest English might be: “My birthday was circled, but it was also garbage day.”

Also, this is expressly senryu, not haiku (less serious, more everyday, no rule about mentioning seasons).

I really admire translators. It’s near impossible to capture every nuance.

So true! (Although in the various book clubs we’ve discovered many … let’s say … sub-optimal translations

Also, this is expressly senryu, not haiku (less serious, more everyday, no rule about mentioning seasons).

Sure, but I had the feeling that the twist-rule was still in place.

I think the closest English might be: “My birthday was circled, but it was also garbage day.”

Oh, interesting - so you’re reading it as one sentence where the circle qualifies the birthday? I read it as two sentences, like so: ゴミの日と丸つけられた。誕生日。
In brute-force English: The day that’s called “Garbage day” was circled. [It’s my] birthday.
Even more nuances to be discovered with these punctuation mark-free sentences

Yep, was just thinking along the same lines

so you’re reading it as one sentence where the circle qualifies the birthday?

Yes, I read it as “garbage day” (ゴミの日) “and my encircled birthday” (丸つけられた誕生日).

I’m no linguist, but I think 丸つけられた誕生日 is one concept.

I originally thought an 同じ or something similar was left out at the end, so I read it as one sentence meaning something like “My birthday that is circled is the same as garbage day”.

Reading it again, it could also be something like “it was my birthday that was circled as garbage day”. Although that’s pretty much just @NicoleRauch’s translation but stuffed into one sentence

That may be a better idea. I will step up to creating this (if certain people stop pestering me incessantly with bug reports

With enough time, we might have enough consensus translations to make the userscript trivial!

(if certain people stop pestering me incessantly with bug reports

…walks away mumbling something about people forgetting to release fixed bugs…

Not sure if someone have create a script that fixes broken images in the forum, yet? (Mostly profile pics.)

I hope the real bug is fixed soon.

It’s crazy that I had to make a quick fix for this, but it is here - https://raw.githubusercontent.com/patarapolw/wanikani-userscript/master/js/forum-img-fallback.user.js (not on GreasyFork this time; and actual test cases are inside the script to avoid tagging someone.)

Also, “Pie in the sky”, I wish Wanikani had a option to send an item to the front of the review queue like Anki. No matter what level it is, I can choose restart its progress. Not only burned items. Although this fault in Wanikani is helping me cut the umbilical cord and I am just adding any instance that brings this about to add it to one of my Anki decks.

By this, do you mean like completely reset its progress back to apprentice 1? If so, I don’t think this can be done through a userscript without completely faking it, which is a whole another beast to tackle.

If it were me, I’d prefer for the item to reset its status unlearned, with a timer that would delay its return to the lesson queue by a few months. (Again, pie in the sky.)

If someone could make this (or point me to an existing extension) I’s be so happy. Often I’ll answer a vocab meaning question correct because I have the link between the sound and the meaning, but not the kanji and the meaning. So the answer is ‘correct’ but I’m not strengthening the kanji meanings at the same time.

What I’m looking for is to place the kanji meanings above the kanji when the questions is answered correct. They’re already shown on the page below the hidden information so hopefully this isn’t too much of an ask. It would be super helpful for me. よろしくお願いします！ 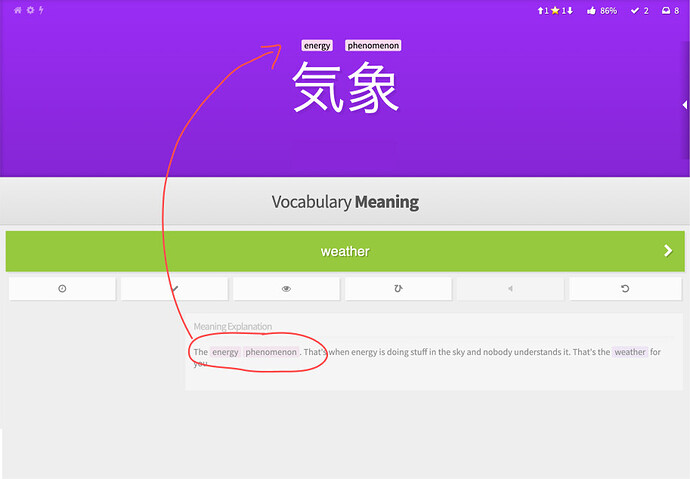 I’m not sure the latter is really something you want to be doing during vocabulary reviews.

当て字 are very much a thing, for example.

I think it’s important to train yourself to learn vocabulary items as one “thing” with associated readings and meanings. This is true whether the vocabulary item is a single character or multiple.

Fast Vocab Breakdown This script aims to make refreshing your memory on a vocab item’s kanji effortless by quickly providing you with the kanji’s primary meanings. Inspired by DaisukeJigen’s Fast Abridged Wrong/Multiple Answer script it simply displays the information on the screen as soon as you fail an item. [brave_25RLt7Y7ps] [brave_P4S7t78JDH] There are settings for which questions (meaning/reading) it should display for. [image] Available at → this innocent link ←

Thanks fo the advice! Yeah, I do treat vocab as its own thing as much as possible. This more about strengthening the concepts and correlations behind each kanji once I’ve already gotten the answer correct. It’s hard to describe but this is how my brain works and how learning is successful for me!

Ah that looks very close! It’s specifically after a correct (meaning) answer that I’m searching for, so maybe a little different. Thank you for the link though!