Thanks for all the thoughtful feedback! We’ll look at them all as part of this week’s updates

I’m guessing the next batch of updates should cover all the remaining kanji, and we’ll get 瑠璃!

買い物 has the reading mnemonic:
The readings are the readings you learned with the kanji.
But 物 was ぶつ, and not もの, even though this word is かいもの
Probably should be changed to the “the readings are kunyomi, which you’ve already seen with x and y” template

The next additions have been published, and we moved three existing words up a bit at the same time:

I’m curious, what was the reason behind the whole one level change?

This is to spread out the planets a little more, to avoid practicing two brand new kanji in the same word, and to even out level numbers a bit too

The new Kanji unlocked for me but not “Mars”?

It might be taking a little while since it’s a lower level with a lot more users. Hopefully it will unlock in the next 15 minutes or so!

i got it, so its working

Hey, for the new vocab item WaniKani / Vocabulary / 火星 , I think the the following sample sentence has a slightly wrong translation?

I think you meant Olympus Mons, not Mount Olympus? I get that Olympus Mons is Mount Olympus in latin, and it’s probably written that way to reinforce the earlier ~山 vocabulary, but if you watch a documentary on Mars, they definitely call that mountain Olympus Mons 100% of the time. Like in this wikipedia article Olympus Mons - Wikipedia .

It’s interesting that Mount Olympus and Olympus Mons are said the same in Japanese though. Apparently Japan isn’t on board with the fancy names for space mountains trend.

Apparently Japan isn’t on board with the fancy names for space mountains trend.

Thanks for pointing this out! Fixed!

Can 助ける get at least the “… someone” forms as whitelisted meanings? Like “To save someone”

Yes, this will be added as part of this week’s updates! 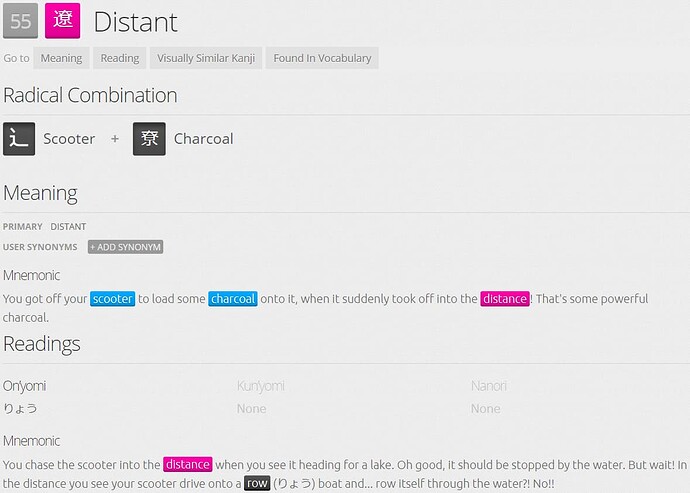 Not sure if intentional and if y’all usually do this

Do September updates mean Wanikani is preparing to dive into names and nanori?

@Lahoje Thanks for pointing this out! Definitely a mistake, but it should be fixed now!

Do September updates mean Wanikani is preparing to dive into names and nanori?

@ScooterFox The September updates are just to consolidate kanji that doesn’t currently have vocabulary.

I cannot do my lessons as it seems to get hung up on “Mars”. I am on Level 19. Not sure if it’s a problem on my end? This is day three of not being able to do lessons.

The difference of “distance” and “distant” didn’t bother me, one is just the noun version of the adjective. But the new mnemonic with “distant place” is fine too, so i don’t mind.

Hi @Cat5was912! That’s strange. I haven’t heard about any problems on our end, but if you email us (hello@wanikani.com) we’ll try to get to the bottom of it.

This week’s batch of additions and other changes are live: