I was able to get Lesson Filter on iOS Safari by using an extension called Hyperweb. Pretty cool! 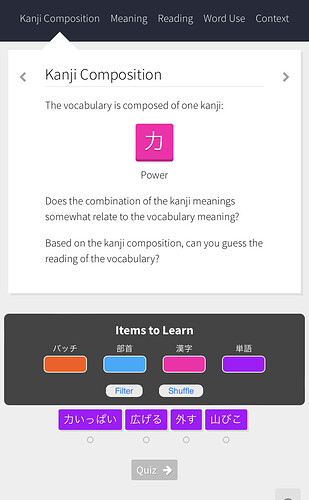 Hey @seanblue, could you share how you set up user scripts in Hyperweb? I’ve tried and failed to get any of them working so far. Perhaps the script loading order is not guaranteed so WOF doesn’t load first? 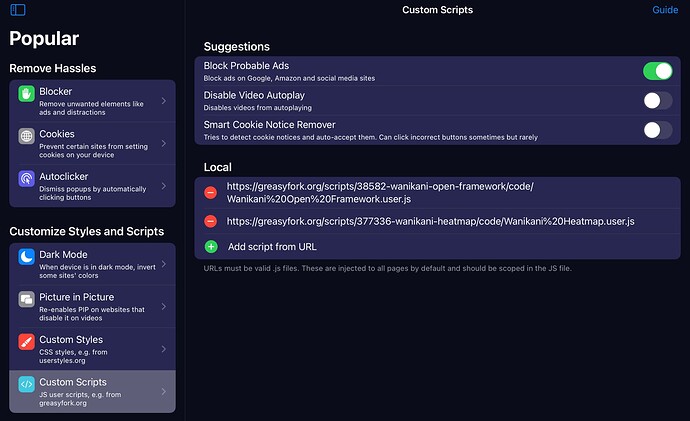 I doubt the order is honored. Lesson Filter doesn’t rely on Open Framework, so I never bothered testing what would happen with scripts that depended on it.

Hey all. If any of you have been dealing with the issue where the quiz starts early or requires extra clicks / keypresses that should be fixed now. It was particularly obvious if you changed the batch size using the script. The bug was a side effect of a somewhat recent change from WaniKani, impacting only people with compatibility mode off. Now this should not be an issue regardless of compatibility mode being on or off.

Hey, I installed the scrip yesterday and really, really love it! However, I don’t know if it’s been brought up by someone already, but woud it be possible to have that box where you can type in how many items you want to learn from each type removed after the first item is done? It’s distracting me a little when I see that black box next to the white of WaniKani at the bottom of the page and would really love it if it was removed after the first item it done or after one has klicked on filter/shuffle, since you don’t need it anymore after this point. But then, if it’s too much trouble and other poeple don’t seem to mind, then it’s ok! I’ll just get used to it, the script is amazing the way it is now anyway and has helped me to make progress quicker. Can’t believe that I only discovered it now.

Best of luck with your studies!

Didn’t take that into consideration. Well, then I’ll just have to get used to it. Thanks anyway!

Hello @seanblue, thank you for the script, it is very efficient, and useful to me !!

However, just like @Jin-ki, I think that maybe it could benefit a slighty different design.
If don’t know if that would be a lot of programing work. If so, just forget about my proposal. I’ll just get used to how the script is now, because it is so useful

Again, if that’s a lot of work, I’ll totally understand that you don’t have time for it. Thank you for what you did already, mate 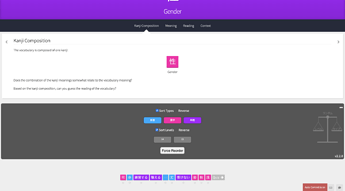 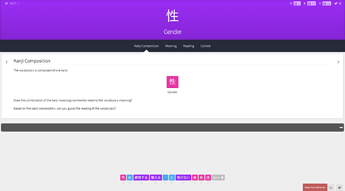 Hello @seanblue , thanks for the script! I installed a couple weeks ago but the filter button suddenly stopped working for me.

I’m not at all familiar with using userscripts but I looked at the devtools window and this shows:

As you can see, the shuffle button still functions properly, but when I click the filter button nothing changes and I still have more than 10 kanji in the queue. Not sure if that error in the screenshot has anything to do with it. Could this be a bug or am I just not using this properly?

I think it’s working correctly. Since you left the radical and vocab inputs blank, that means those are not being filtered out. If you want to only do kanji lessons, you have to set radicals and vocab to 0.

To see if it’s working as expected, look at the top right corner of the lessons section. For example:

Using the values in your screenshot, you should see the kanji value drop to 5, while the other two stay the same since they were left blank.

So I just wasn’t using it properly.

Sorry about that and thanks for the very clear explanation!

@seanblue I really LOVE this script and use it heavily, but I was wondering, do you think there might be any way to cherry pick lessons from a list of all possible items queued up?

Use case would mostly be for quickly adding vocab word lessons for the kanji I keep getting wrong, without having to first go through the other lessons queued up before that for the ones I’m not having any trouble with.

Apologies if this is too far off of what this script is designed to do, but I figured you would know best if it were even possible.

It sounds possible to me, sure. Definitely not something I’d add to this script though, and I’m not writing new scripts for WaniKani these days. But if you know programming or have an interest in learning, you are welcome to modify my script to support this.

I might take a stab at it after the JPLT this December, then, if it seems like something the API could support!

I’ve been low-key looking for a new programming project.

Was thinking of trying to rewrite this for APIv2, but I honestly doubt anyone except me still uses both WK and a Pebble smartwatch, and if it’s just me I can just manually input a list of kanji I’m currently trying to memorize and skip the whole API call part of it. Might be a cool project to tackle as a desktop app or phone app, though… I like the combination of funtional clock + kanji review.

I might take a stab at it after the JPLT this December, then, if it seems like something the API could support!

The script doesn’t currently use the API actually. I have written some scripts that do, but this one just relies on the lesson data being loaded into jStorage. In theory you could input the kanji you want to reinforce, have it search through the list of lessons in jStorage, and move vocab items containing that kanji to the front of the queue.

Admittedly, I’m not entirely sure if it really the case yet but it seems that the lesson filter script is not working because it didn’t show today despite being marked as active when I was doing my lessons (worked fine yesterday and the days before).

I suppose that this is probably connected to the retiring of script compatibility mode.

Hi All, This change is now live. I will keep you updated on further changes to compatibility mode in new topic postings. Thanks for the feedback so far

On that note, would it be useful to create a thread where community members collect all changes they noticed for any script to have an overview for the coming days/weeks, or should we just stick to reporting changes in script behaviours in the respective script threads?

I still see the filter options on my end. So it works for me. Some other things look a bit weird though. xD

When you say it doesn’t work, is it that it doesn’t appear at all in the lesson page ?
Because that’s an issue I am facing and I think it’s related to a problem between chrome and Tampermonkey. I refresh the page until it works.

It has been reported in other threads that one way of fixing it is to change from Tampermonkey over to ViolentMonkey. I haven’t done it yet since I am too lazy to reinstall all the user-script. I was low-key hoping the issue would be fixed quickly. But this issue has been running for a month now on my end, so I think I will do the switch shortly.

Not sure if it’s what you are facing though, but here is the thread I mention, just in case

I just swapped to violentmonkey on my chromium browser, and the problem is solved. Looks like current stable tampermonkey has the issue. You can export to zip in Tampermoney, and import that into violentmonkey also, if you have many scripts and don’t want to re-add them all manually.

@MissDagger Good to know that it works for you – which browser do you use?

@Makushi_Rutsu
Yes, that’s what I meant. Despite still being ‘on’ in the tapermonkey settings, the filter doesn’t show up anymore.

I don’t use Chrome – I use Safari for Wanikani – so I assume that it’s not necessarily a problem with the browser either because the script worked yesterday. Still, thank you for your suggestion!
I took screenshots of my Kanji lessons yesterday and today and can show them here – all of them (are supposed to) have 7 scripts running including the lesson filter: 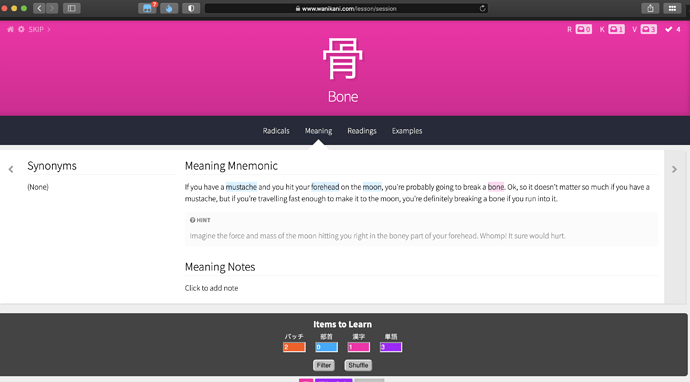 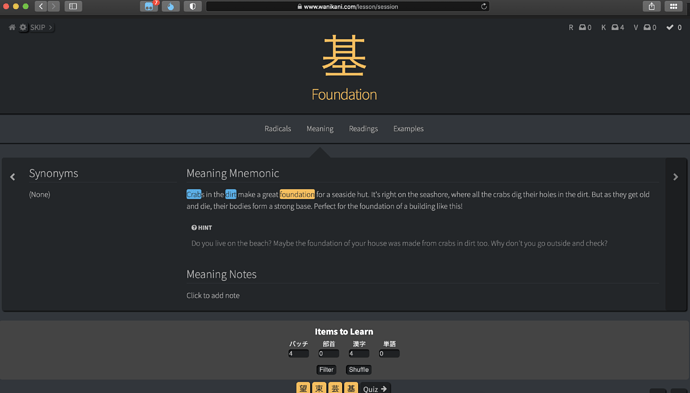 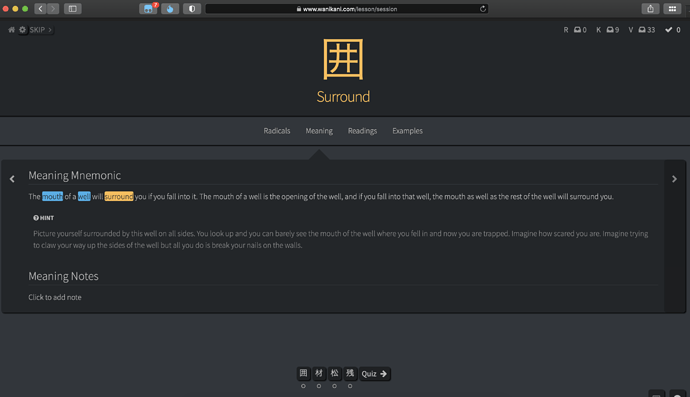 I’m on Safari too.