Apart from that: added community editions for JDoBG and JDoIG.

Are these available freely with permission from the authors and/or publisher? The second page of the book indicates an “All rights reserved” copyright notice which would prohibit the book from being copied and distributed freely.

In general the Internet Archive library respects copyrights and other proprietary rights hold by other people. Therefore, lot’s of their books are for lending only as in any physical library as well.

I’m not in any way associated with the Internet Archive so I have never seen any permission personally. So this may not fully answer your question.

Best next thing I could come up with after reading your response was sending them an email to their department for copyright questions or issues to double check.

Anyway, thanks for addressing the matter as I do not wish to post any links that are not compliant within the community guidelines.

@Mods are there any preferences when it comes to items in the Internet Archive?

The Internet Archive seems fine to share since it looks like you have to purchase to view it, unless you’re trying to share something that was only for you to see after payment.

It seems that Nihongo no Mori has just (I’m not exactly sure when) started a paid service on their website!

So far there are materials for N1 kanji, vocabulary, and grammar. I’m not sure what will be added next, but there are additional sections for listening, reading, and testing practice, and I assume they will add materials in reverse order (N2, N3, N4, N5). I’ve only just started using it, but the functionality seems to be like their Youtube videos but more concise and professional. There are also interactive practice questions (very similar to the actual JLPT) that you can answer before the element being studied is explained in depth. 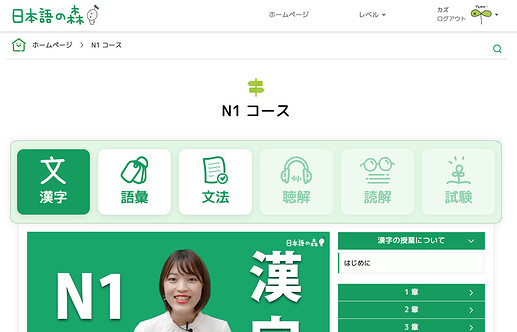 All in all, it seems like a very professional service for ¥980 a month, and I’m personally really grateful that they’ve started with N1 since that seems to be the most neglected level by online resources (…also because it’s the test I’ll be taking next July). ^^

This looks like it will be an amazing thing once they have all their videos from previous levels. I loved watching the N3 videos on Youtube. Does it say anywhere when or if they will add more.

I’ve added Nihongo no Mori to the Textbooks and Grammar > Paid online section. Since you’ve used it a bit, do you think it compares to the other resources in that section?

Does it say anywhere when or if they will add more.

Yes, it does! They’re homepage says 準備中 over the N2 and N3 sections, so I’m not sure what will be added first. Either the rest of N1, or the first sections of N2 and N3. I think the latter is more likely, since it’ll be useful to more people (and there’s already plenty of N1 material to start).

I’ve added Nihongo no Mori to the Textbooks and Grammar > Paid online section. Since you’ve used it a bit, do you think it compares to the other resources in that section?

I was wondering this too actually, which is why I didn’t add it to the list initially. Technically it’s equal parts vocabulary and grammar so far (there are also kanji explanations, but I think those are pretty similar to learning vocabulary). If there was a JLPT section, it’d obviously fit right in there, but I think it might make the most sense under General Practice? Or Software?

EDIT: Actually the more I think about it, the more it makes sense under Textbooks and Grammar!

Potential new resources to be added but they’re very new and/or there aren’t many reviews of the service they offer, or they’re incomplete:

Also Flash is being deprecated so Flash resources may no longer work soon. The Internet Archive have a project to try to save some of the resources, but I’m not sure how to go about adding resources to their project. Maybe @rfindley understands this more than I do, but it might just be on the developers to add their own swf files to the project.

I came up with this list of resources for someone on another thread, but I figured it would be a waste if I didn’t leave some suggestions here. I’m not sure if I can/should edit the list directly, particularly since I might put certain things in the wrong places, and because I’ve seen many suggestion posts, along with a change log by @Kraits. Please tell me if you’d like me to add the resources myself. I’ve done my best to remove stuff that’s already in the wiki post.

Most resources on this list are for intermediate or advanced learners of Japanese. In particular, some of these resources are written >90% in Japanese. This list also highlights an error in the wiki-fied original post concerning Weblio, which actually puts two dictionaries (JP-EN-JP and JP-JP) at our disposal.

Resource names are highlighted in green. Collapsible descriptions are provided to allow everyone to judge how useful they might be. Here is the list:

Physical textbook : An Integrated Approach to Intermediate Japanese (from Genki’s publisher, the Japan Times) EDIT: Less advanced – it apparently covers less than Tobira overall, even if one can start either textbook at about the same level

I am also looking to take the N1 come July, so I was wondering: How do you feel about the Nihongo no Mori paid service now, after using it for a couple of weeks?

How do you feel about the Nihongo no Mori paid service now, after using it for a couple of weeks?

So I personally feel very positively about it! ¥980 per month isn’t a huge change to my budget (it’s basically a Spotify premium subscription), and the material available for the N1 is very comprehensive.

Since everything is in video format, the pace is slower than a textbook/website like Tae Kim. But I also feel like there’s a lot more information about the context in which words or grammar points are used, which is a lot more important for the concepts tested on the N1 than previous exams.

Perhaps it could replace a book series like 日本語総まとめ which is meant to be completed gradually, but I don’t find those series of books to be comprehensive enough on their own to pass the exams anyway. Instead, I think it will be much more useful as a daily resource you work through little-by-little in addition to whatever else you’re doing to prepare for the exam!

Hope that explanation makes sense and answers your question!

Question: Are those Dictionary of Basic/Intermediate Grammar links to Internet Archive legit? Isn’t that a case where someone took a digital copy of the books and uploaded them to Internet Archive so people can download them without paying for them?

I don’t know anything about this myself, but it was addressed earlier

The Internet Archive seems fine to share since it looks like you have to purchase to view it, unless you’re trying to share something that was only for you to see after payment.

Thanks, I had missed that, as I’d only done a thread search for mention of the dictionaries.

That said, it looks like anyone can view the whole of both the basic and intermediate dictionaries on there. No proof of ownership required.

Maybe @Mods should have another look at it

I think you’re right. I just clicked both links and could look through both of them without anything asking me to pay.

Although I can’t be certain, they do feel more like scans than official releases. The “PDF with text” option seems to result in something that looks more like some automatic English word detector went through images to place text on the images. Highlighting any japanese text seems to result in gibberish, which leads me to believe it’s not official. I can’t be certain though.

The intermediate, you can tell at a glance someone scanned the whole book in (not official scan).

But that doesn’t impact the legality.