I think 書けた is the “past positive potential form” of 書く

Apparently the “potential” conjugation of a verb “expresses the idea of ability or cabability”.

One way to think of it is the past tense of the potential form is the realization of that potential.

One way to think of it is the past tense of the potential form is the realization of that potential.

There is an interesting chapter in Making sense of Japanese by Jay Rubin with an example almost the same as 禁煙と見事に書けて, a chapter about the “natural/spontaneous potential”. It’s a bit long, but interesting.

The last example 小説が書けた is almost the same as 禁煙と見事に書けて. So if I understand Jay Rubin correctly, I guess the potential is used to show some kind of spontaneous feeling behind it, like if the person after writing the 禁煙 sign can’t help but think “it came out beautifully”, something like that maybe.

Wow, thank you! I found that super interesting. I’ll move that book higher up on my (looong

I said in the introduction to this book that, “All too often, students are subtly encouraged to think that Japanese verbs just ‘happen,’ without subjects, deep within
some Oriental fog. In the world represented by Japanese, actions ‘occur,’ but nobody does them,” and I’ve said a lot since then to lay to rest such “twilight zone” notions about the Japanese language. Now I take it all back. There really is a twilight zone in Japanese, and the “natural potential” is it, that misty crossroads where the passive and potential intersect, where things happen spontaneously or naturally. Another term for the “natural potential” (shizen kanou) is the “spontaneous passive” (jihatsu ukemi).

We encounter this form most commonly when an essayist, after supposedly regaling us with objective facts, suddenly ends a sentence with kangaerareru or omowareru
or omoeru, any of which would seem to mean “it is thinkable” or “it is thought,” but not “I think.” What is he doing? Ducking responsibility for his own ideas?
“Passive and potential forms are sometimes used in a way which might strike the English speaker as strange,” says Anthony Alfonso. “When something is left, or thought, or even done involuntarily or naturally by a person, the action is described in an OBJECTIVE manner and by means of either the potential form or the passive form with a potential meaning.”

Take, for example, this somewhat spooky recollection of a childhood incident by the narrator of a story called “Man-Eating Cats.” The day his cat disappeared into the garden’s pine tree, he says, he sat on the verandah until late in the evening, unable to take his eyes off the upper branches of the tree in the brilliant moonlight. *Tokidoki *
sono eda no naka de, tsuki no hikari o obite neko no me ga kirari to hikatta you ni omoeta. Demo sore wa boku no sakkaku ka mo shirenakatta. “Every now and then, the cat’s eyes seemed to be flashing in the light of the moon. Maybe it was just a hallucination of mine.” The italicized phrase translates the natural potential expression you ni omoeta, which certainly does not mean “I was able to think that …” and certainly does mean something more like “It seemed that . . . ,” “One couldn’t help feeling
that,” “One could not but think that . . . ,” etc.

I’m not sure if such a description is entirely “objective,” but it does seem to be removed from the observer’s exclusively subjective domain, perhaps floating somewhere in
the middle between pure subjectivity and pure objectivity. The implication is that the environment naturally leads the speaker to think or feel something. These forms don’t
translate properly as either passive (“It was thought by me”) or potential (“I could think that”).

A few more examples: When a sad occasion brings forth an involuntary gush of tears, the verb naku, “to cry,” is routinely inflected as a potential, nakeru, as in Nakete
kichatta I “I just couldn’t help crying.” When a Japanese fisherman pulls a fish out of the water he doesn’t take the credit for it as English speakers do. Instead of shouting “I’ve got one!” he inflects the verb tsuru (to fish) with the potential ending and says Tsureta! I “It has spontaneously caught itself on my line!” And when a Japanese writer
talks about the successful completion of a novel, he will often say Shosetsu ga kaketa, meaning not boastfully “I was able to write it,” but far more modestly, “It was writable,” “It wrote itself.”

Good luck with this one.

Should’ve finished the explanation with a 考えられる, missed potential (pun not intended)

Woah. I’ve been waking up to this view every morning for the past several months: 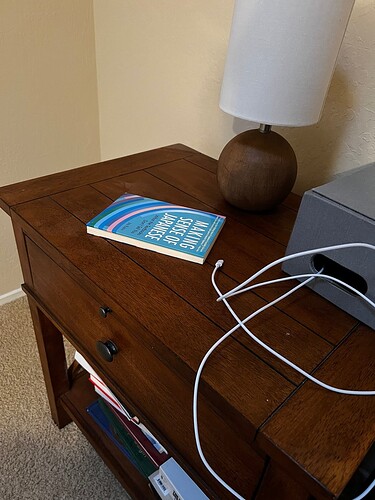 Apparently, this book will have caused itself to be read whether I actively try to or not! I haven’t had my coffee yet or I’d attempt the past potential positive of 読む.

I made it to page 41 in one sitting, but the bookmark has stayed there since last Xmas if I remember correctly.

Thanks for helping me progress!

P.s. I need to run out for a bit. I won’t be able to post today’s poem for a couple more hours.

Thanks everyone for a GREAT discussion yesterday. That was a ton of fun and I feel like I learned something regardless!

Unfortunately, the collaboration ended with a complete understanding, but without an actual translation to pick from, so I’ve taken the liberty of modifying @Gorbit99’s wording slightly.

Another one that I find challenging:

I’m not 100% sure I understand this correctly, and I can’t figure out how to make this a literal translation, but to kick things off with what I think it means:

Even if you’re the devil, please come! I’m sooo fed up with living alone.

Note: I am aware that 鬼 means “demon”, I just thought that “devil” fit better for a western translation

We clearly think alike. I went back and forth on that specific word choice multiple times.

“Ogre” or “troll” would also be reasonable choices.

In fact, after writing that, I’m changing my submission!

I think you guys sorted it so I don’t have anything to add for the translation.

I’m unsure if the choice of 独り vs. has any implications

“Ogre” or “troll” would also be reasonable choices.

I think Ogre is a closer approximation, but that just may be my bias from first seeing the word in Final Fantasy Legend on the original Gameboy, and they sure looked like ogres.

Ok, i have not looked at any other attempts, but in the spirit of participation i was talking about yesterday, I am going to attempt it myself. But i had to look up every word, so I’m not confident.

Even oni get tired of living alone.

Now to see if other people agree!

Edit: I’ve looked at the other attempts, and I agree with those more. My translation ignored the 来い

Now to see if other people agree!

One thing I think you missed is , which is the imperative form of , to come.

Without that, I think your translation would indeed be correct.

Yep, i noticed that after I read the other attempts. But that’s what I was saying before, you really need to pay attention to everything, so that’s why I think it’s fun

you really need to pay attention to everything, so that’s why I think it’s fun

I also think this is a good learning exercise because, like @Rrwrex said, Senryu are short but they highlight nuances that you have to work to pick up on. And you have other people participating to act as sounding boards.

That makes sense — thanks!

Kinda apropos, actually (in a temporary sense). I can’t wait for her to get back from Japan. Hopefully only a few more weeks — it will even be nice to see a vegetable or two in my diet again! <laugh>

Yeah, I’ve found that the more vocab I learn the more I can see interrelationships. And they get a bit easier to memorize. lol

This one shouldn’t be too difficult. Have fun!

There must be a more natural way of phrasing this without too many changes, but this is the best I could do with a fairly literal translation.

Never seen へは before, also a lot of words missing, the と without any verb was definitely a red herring.