WK apparently doesn’t accept “wise” as an answer for 聡明, even though 聡明 also functions as an adjective. 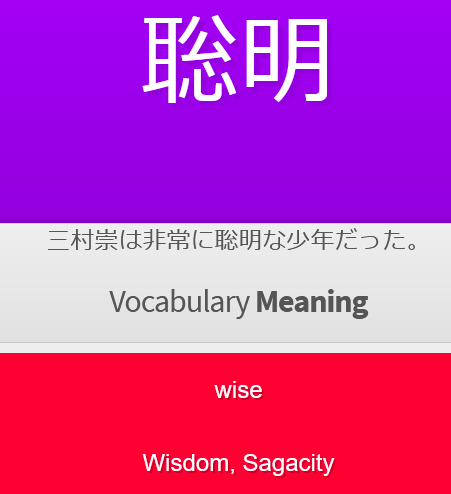 Even the example sentence translates it that way:

. It’s not a bug, “wise” is probably just not added to the synonym list.

There is a couple of items like that where the item is a na-adjective, but only nouns are accepted.

Ah, since it’s business as usual, I know now not to bother reporting those.

There is such a huge amount of obviously missing synonyms with the missing synonym even used in the example sentences - especially in later later levels. I used to track all the ones I found in a list that I planned to send in once I reach level 60 - but at some point I just stopped caring and have been relying on my own synonyms and override scripts ever since.

I pointed out several yesterday and got this response

We’ll consider them but could you add all those to your user synonyms if you need to use them right away?

which doesn’t make it sound likely imo, but maybe if enough people collectively complain about this sort of thing, they’ll add them? WK does seem to be headed new directions content wise.

WK apparently doesn’t accept “wise” as an answer for 聡明, even though 聡明 also functions as an adjective

Thanks! We’ll take a look at it.