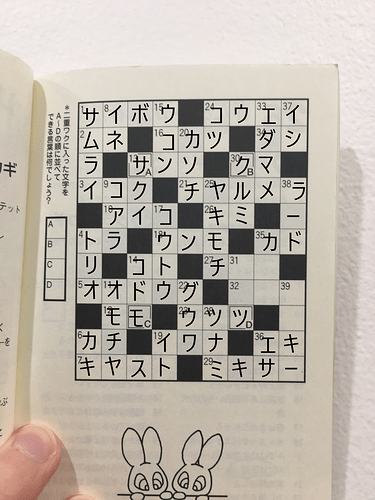 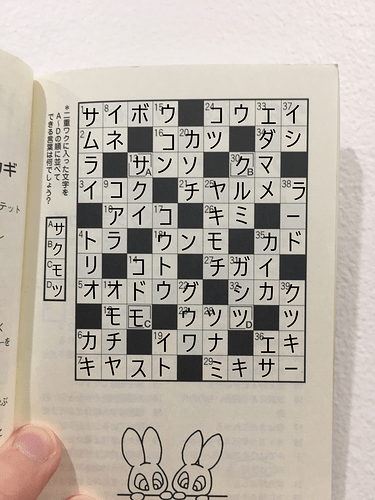 And the secret word is… 作物 - crops, agricultural produce

What do you use to fill in the spaces?

My image editing software? I use paint dot net (not to be confused with normal old paint).

I usually use GIMP, myself. 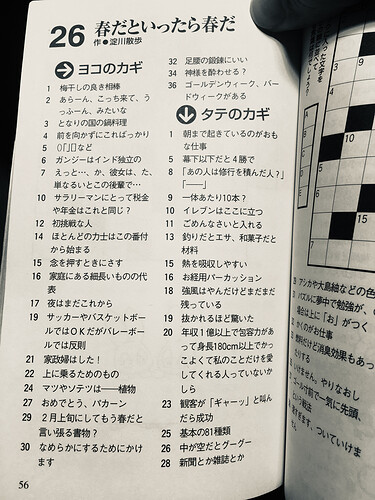 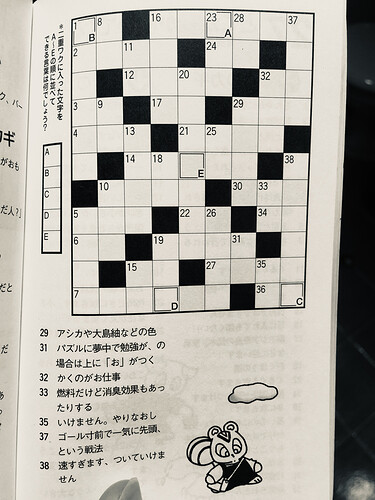 so y’all are leaving this all to me then huh?

More that I don’t get notifications when you edit a post to add more answers. Gonna need a bit of time to look those over…

i mean, if you have the ability to keep a quick tempo, then perhaps yes?

my life often gets in the way of this thread. boo. i’d rather being doing crosswords, but alas.

i pledge to… contribute when i can. which might be next week. XD

お留守になる means “fail to be attentive to” (for example, studies), so it’s ルス

35-down ダメ
36-across メイ
23-down ホラー
24-across ラシ
16-across モノホシ something, something. There seem to be several words that’ll fit here.
Makes 28-down シシ, which I don’t really get. The clue is clear, but nothing in the dictionary seems to match.

お留守になる means “fail to be attentive to” (for example, studies), so it’s ルス

I think you are reading the wrong clue.

31-down: パズルに夢中で勉強が、の場合は上に「お」がつく - I read this as “When you’re too absorbed in the puzzle to study, this will have 「お」 attached”. Which is to say 留守, which becomes お留守 when you’re neglecting your studies.

What interpretation results in ルビ being the answer?

Oh I see. When you put お留守 I thought you were quoting the clue, so I wondered if you were reading a different clue. I suppose I read that wrong, I read 上に as “attached above” (I forgot that it also has the “before” definition) so I figured ルビ fit.

I’m seriously tapped out on the rest. I can’t see anything that makes sense for 5-down (if 5 and 6 across are correct) nor 7-across (if 26-down is correct).

Biggest issue with 5-down is that it’s gonna be some kind of sumo technical term. And after a bit of Wikipedia research, 幕下 ranked wrestlers fight seven times in a tournament, so one who’s won four times has more wins than losses, or in other words, カチコシ.

Makes 6-across チチ, though I don’t entirely see why.

And that’s done. Gonna have to draw up the finished grid in the morning, because it’s too late at night now… 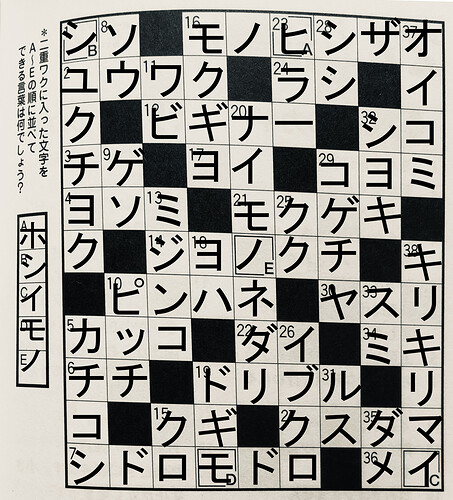 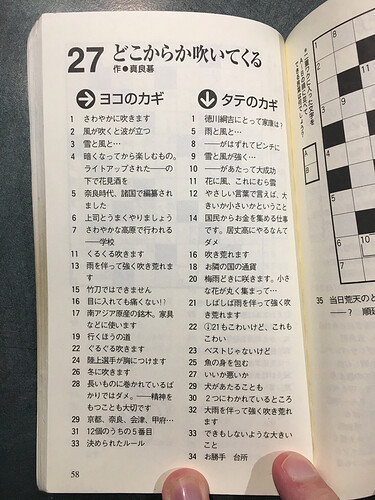 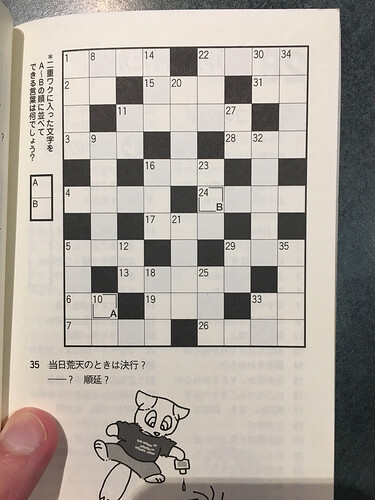 Kick us off with…

1-down ソウソフ
2-across ウミ, I guess, but working the obvious “wind” theme in to that clue is a bit laboured…