This freaking よょ thing is driving me mad.

Come to think of it, I might have come across that word recently

One letter left. And you’d think the fact that it’s also the last letter in the magic secret word would give it away, but I’ve not nothing there either.

Edit: Ok, I think I’ve got it. ひとくぎり is a word, so the answer is クギリ

Well, I was going to say.
得 as in profit, in case you’re selling and they pay you more the more you sell.
Also saw 大工道具

Had seen 一区切り before, but since it seems that it’s not break as in 休み, but end; break as in:

I thought it wouldn’t be it.

Yeah, but when I stuck ようやく仕事 into Google, I got a whole bunch of results that ended with が終わりました and other similar verbs.

And done. Answers concur. It’s amazing how the rest just fell into place once we had 1-across… 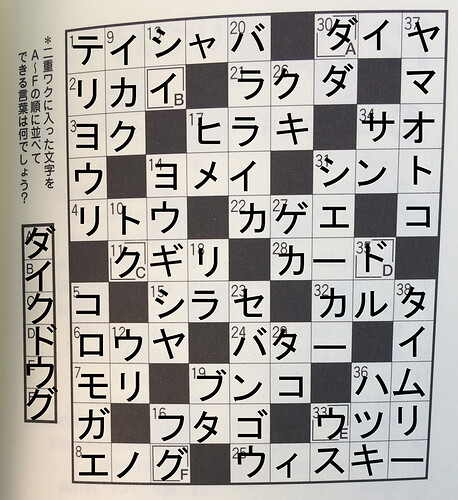 Pondering uploading the next puzzle, though we’d have to finish it by Monday if we want the answers before I go on holidays.

Sounds good to me.

Challenge accepted? As you wish. 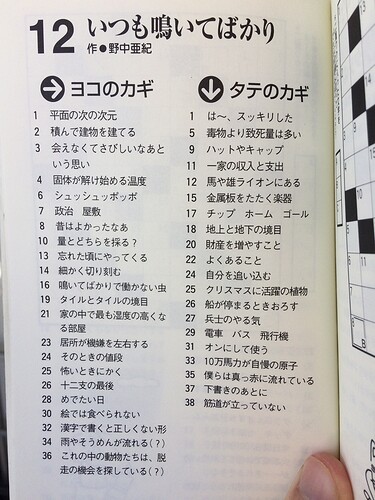 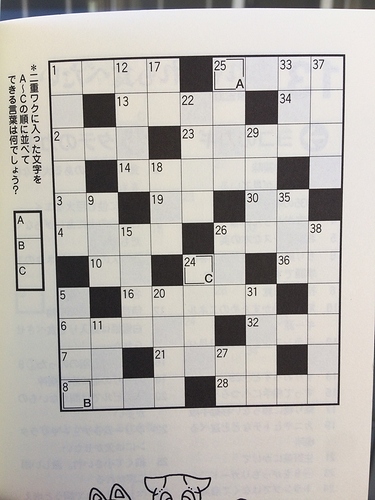 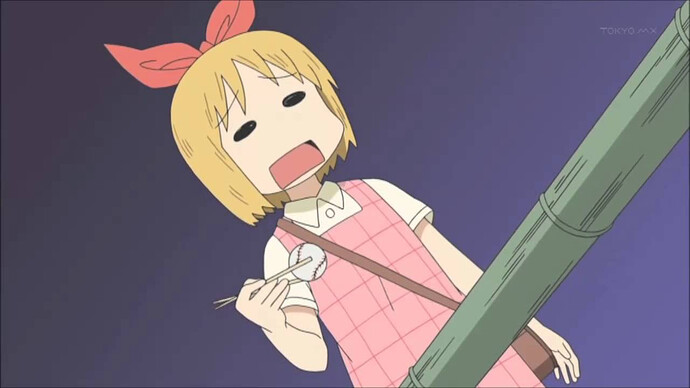 Apparently, bamboo traps are a thing.

That one is already answered.

キカンシャ. To use the technical terms, it’s a steam locomotive.

Yeah, I see why you’re not too confident on those.

Gah, I was trying to find a word that fitted on the front of the ones in the clue…

Actually, come to think of it, I think 25-across is ナマアセ

Change of plans: 25-across is ヒヤアセ
Which means 25-down is ヒイラギ

22-down サハンジ
Which makes 13-across テンサイ, which I only kinda sorta get

Pretty sure 18-down is ジメン, which makes 19-across メジ, which does work. 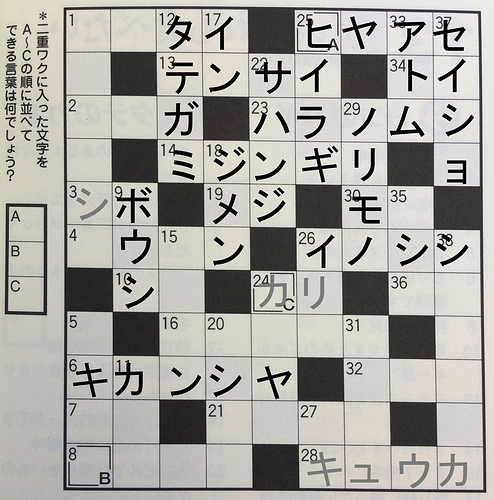 Edit: And now that I’ve finished uploading, 4-across is ヨウテン. Uh… or ユウテン. And I kinda want to say 15-down is テッパン, because that’s the name of the Asadora I’ve been translating, but I really don’t think those are musical instruments, so it’s probably not that. It’ll be something similar, mind.

2-across レンガ
4-across ユウテン (I’d go with ユウテン since the jisho definition actually describe melting in the definition. 1 down will help determine which though/

Then 1-across is リッタイ (had a vague idea of what that was supposed to be, but couldn’t quite nail down precisely which word).