It was a small fire, omg.

Can we get a finished product? 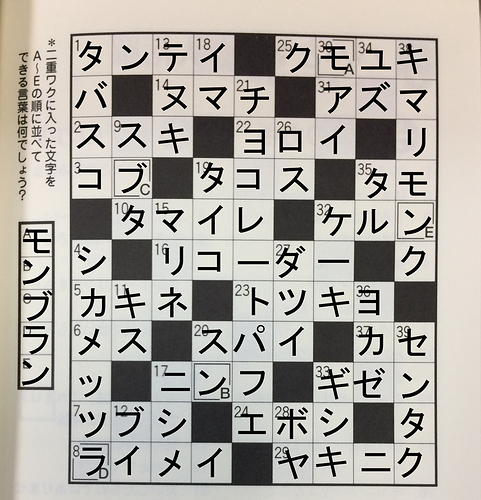 What an interesting phrase. Why would you do the washing while the demon is away?

So, while doing my N4 homework:
子供が寝ているうちに、洗濯をしておこう。
Coincidence? I think not.

Yah, we did good. Full marks. 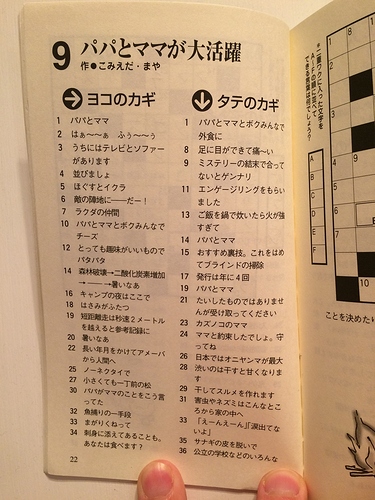 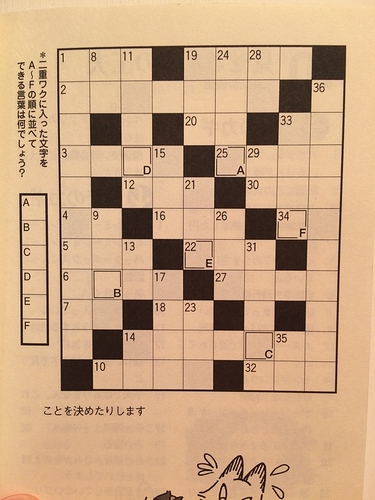 Considering how many clues are パパとママ, I’m a bit concerned it’s going to be a bit tricky. Reckon one of the answers is going to be リョウシン. Not 1-across, though.

Hm I guess 14 across is related to 地球温暖化, but it doesn’t fit. おんしつこうか？ (green house effect)

Suddenly thinking 1-down is ファミリーレストラン

That gives us a lot of first letters to base cross words off.

Yeah, I had a feeling the middle character of 12-across was going to be ン

25➝ How about ネイビー?
Not confident, but I found a few articles about business casual saying ノーネクタイ and ネイビー スーツ.

Although the secret word could be けっこんしき.

Yep. One of the rules of Japanese crosswords - small characters and normal characters are equivalent. And a katakana long-vowel character can represent different vowels at the same time.

You literally just suggested a word which put a か as the second character of 33-down, so surely you’d want to suggest words that fit that pattern.

If it helps any, I’m fairly sure えーんえーん is the sound of a baby’s cry.

Would like to posit アオイキトイキ for 2-across, but I’m not overjoyed with either that or the resulting ウオ for 8-down.

Would like to posit アオイキトイキ for 2-across, but I’m not overjoyed with either that or the resulting ウオ for 8-down.

足に目ができて痛い I have an eye on my foot and it hurts.

I’m fairly sure えーんえーん is the sound of a baby’s cry.

Yeah, I know that. I learned a lot about babies and why they don’t shed tears until later, but nothing that helps in the crossword puzzle.

Cormorant fishing is a traditional fishing method in which fishermen use trained cormorants to fish in rivers. Historically, cormorant fishing has taken place in Japan and China from around 960 AD. and recorded from other places throughout the world.

What do you think about this?

What do you think about this?

Aww, I’ve been trying to think of a word for a butterfly that’d fit, but I didn’t think of the actual act of emerging.

Aww, I was literally just about to post that.

This has proved simpler than I expected. Only three words to go.

曲がりくねる
to bend many times; to turn and twist; to zigzag​