About the use of で in the post (which I think came from a WK context sentence for 上級): Assuming the sentence is grammatical, I’m curious why the use of で can’t be the particle?

In an article from Tofugu on the particle で in the section で for Categories, they seem to imply that で can replace の中で:

OK, so, after looking it up, it seems that like Tofugu said in that article, it is possible to use で that way, but it only appears in one of 3-4 monolingual dictionaries I searched (namely 明鏡国語辞典, 3rd edition). The essence of it is that this sort of で specifies limits on the context in which something is occurring or being discussed. However, here’s the thing: most of the dictionaries discuss this usage for time expressions only.

Now, I think we could see this as an extension of the locative usage of で, which allows us to specify where something is happening and therefore to indicate a context, but I’m far more used to seeing this sort of ‘figurative location’ usage with things that can actually be construed as such (i.e. as areas, fields, containers/repositories etc). That’s why using it for スポーツ doesn’t strike me as much – it’s just a field. Additionally, sometimes, these things feel like an extension of the ‘means’ usage, which is how I understand it when I see stuff like the structure AとBとでは (‘with both A & B’ i.e. if that’s what I’m considering), though that doesn’t always work and can make me question whether or not we’re dealing with a て-form. It’s been so long since I’ve seen で（て-form of だ）は though, so I’m not very sure. But just to round up this thought, I very rarely see this being used for things that do not seem to encapsulate some sort of space in and of themselves. That’s why it strikes me as strange to use it with 〜山 or 〜人, even though it seems, based on what I’ve just read, that this usage is possible. (I will note, however, that even the dictionary that gave me this definition uses this as an example with 人: 「若い人の間で人気がある」)

Even so, I still feel – especially when the category evoked is not explicitly something that contains or encompasses something else – that it’s possible to parse this as the て-form of だ. I was hesitant to do so because I haven’t been consciously looking out for で as a て-form in quite a while, but it seems that one can see it this way. For example, in では, according to the dictionary on Goo:

(In essence, it says that では designates something as a pre-condition for a certain judgement, rather like ‘if that’s the case’.) I think the で in でも is also very much closer to the て-form of だ than the particle in some cases.

Anyhow, I guess we can use both interpretations and get ‘among ~’ as a possible meaning. I agree that we could see that comma as a 読点, but my impression of commas in Japanese is that they’re very much up to the writer’s discretion, meaning that here, it could have been added in order to separate that first bit from the rest of the sentence, or in order to separate it from the next clause in order to avoid a long string of unpunctuated words. I haven’t got very far in my book on Japanese writing just yet, but I’m pretty sure both purposes are fine.

To round everything off, I’ll just say this: I guess either interpretation is valid, and perhaps mine ends up being the clunkier of the two – though I will say that extremely long relatively clauses are completely normal in formal written Japanese, so perhaps I’ve just got used to them – but if we really wanted to ensure that the ‘among ~’ or ‘with regard to ~’ nuance is expressed, what should be used – unlike in English, where a comma suffices – is a は:

This is unequivocally a sentence that puts ‘people [for whom] English is not [their] native language’ (literally) front and centre, and makes a remark on that subject. That’s what は is for when it’s alone: topic indication, and at times, emphasis.

Thank you for the explanation – that sentence is much clearer to me with では.

As a beginner it can be tricky for me, but I need to remind myself that every sentence I run across in Japanese may not be perfectly formed and may contain errors/ambiguities just like any in English (I definitely try to take the WK context sentences with a grain of salt).

At the same time, honestly, I don’t think this sentence was wrong or badly written at all, really. It’s open to interpretation, and ultimately, I guess we should all be aiming to eventually understand it in Japanese, and not just in English. Of course, even in Japanese, there’s some ambiguity, but there won’t be a need to break things down in as much detail to get what it means. 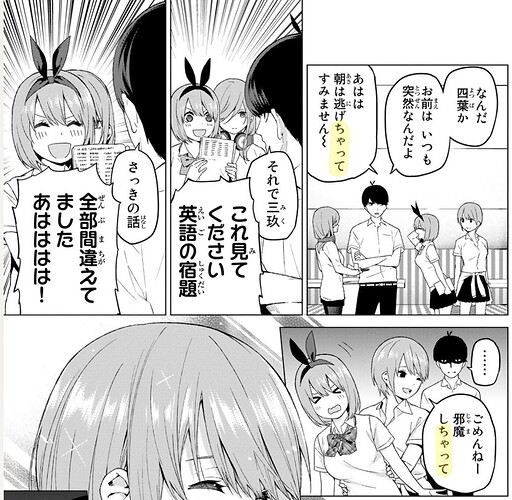 Could someone please explain what this ちゃって verb ending / auxiliary verb / whatever means and what is going on in these two sentences grammatically?

ちゃう is a contraction of てしまう. It’s a general purpose contraction, not specific to the verb する, so you can also see it (for example) in 行っちゃう as a contraction of 行ってしまう, not just in してしまう. From there it’s put into て-form to connect it to ごめんね. Note that the sentence is inverted. Grammatically, it’s 邪魔しちゃってごめんね.

From 鑑み sentence on WK;

In light of the importance of diet for health, we will support all citizens to eat a balanced diet.

What effect does this have? I don’t see anything in the English related to できる.

I don’t see anything in the English related to できる

食事ができる
to be able to eat

In light of the importance of diet for health, we will support all citizens to (be able to) eat a balanced diet.

See, I figured that, but it was missing so I was confused… Now what about the ような?

Now what about the ような?

ような is a bit tricky sometimes. At it’s most basic, it means like or similar to. Here, it’s kind of saying:

It’s not that it’s implying there are other things, it’s just saying that the support extends to things like this.

Thanks. I’ll be checking that link out soon.

This may help as well: 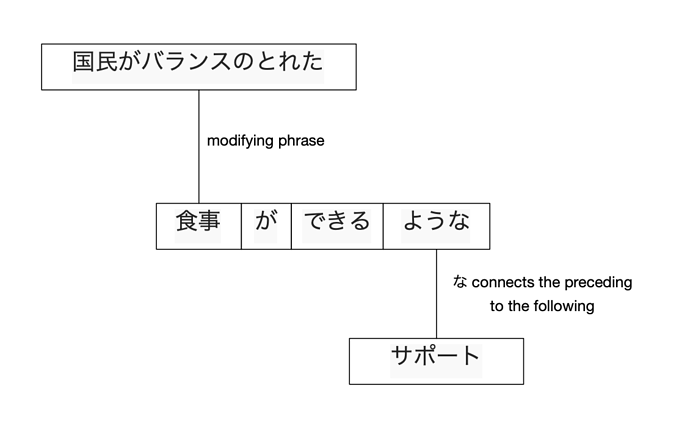 Thank you Seanblue, I appreciate the grammar explanation.

This is more vocab than grammar, but this comes from Jojos part 1 volume 3 chapter 1 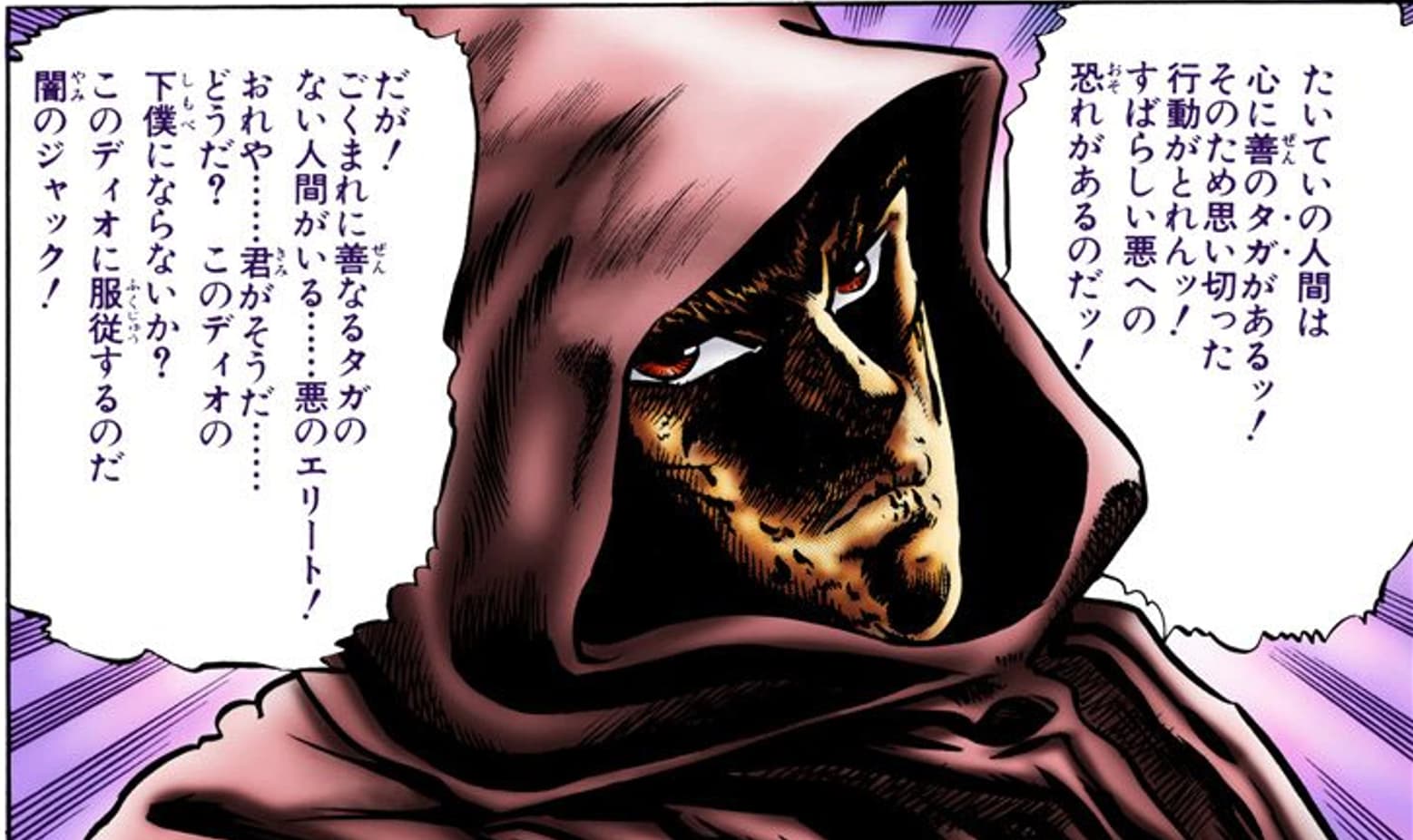 What is タガ? I’ve searched a couple dictionaries and can’t find anything that might be what he is talking about here.

It’s used metaphorically. The kanji version of it is 箍, and the definition is “桶の周囲にはめ，その胴が分解しないように押さえつけてある，金や竹で作った輪。”, with the English translation of “hoop (of a barrel, bucket, etc.)​”.

There’s an idiomatic expression you can find as 箍が外れる that’s translated as “to lose one’s self-control”, and 理性の箍 translated as “the bounds of reason; the limits of (common) sense”.

Basically it’s about having restraint, control, boundaries. A good person will have that “hoop” around his heart that makes him fear evil, while the evil ones are missing it. That’s what he’s trying to say, I think. 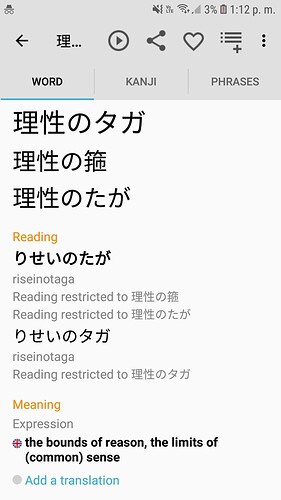 When you conjugate a verb to past/connective form, what determines whether it ends with た/て or った/って? Is it a question or style, or is there some real reason for both these endings appearing?

There are two categories of regular verbs. They’re referred to by several names, but I think the best naming convention is “ichidan” and “godan” where the “ichi” and “go” refer to how many ways the stem (the part that comes first) can appear.

Verbs that end in る can be godan or ichidan. You can sometimes guess, if there is an え or い sound before the る, and especially if that sound is written outside of the kanji, it’s almost certainly ichidan. But some you just have to remember.

Let me know if you you still have questions, because it’s hard to know how much info to give without getting overwhelming.

How does one conjugate a verb to say that it will happen in the future (and is not happening now)? Is there such a conjugation?

You just don’t conjugate it

We don’t. We use the context so decide if the verb is in the present or in the future because they are written the same way.