I am just revisiting Satori Reader as I tried it last year and I was in no way ready for it. I feel I have moved on more now and at the right stage to begin to find it beneficial.

My 2 questions really are:

I can see settings there that can be changed but I’ve just left them as is for now. I’ve heard people choosing ‘Hard’ for everything they got right to try and make it react better but not sure if this would work.

Can’t help with the SRS question since I didn’t use it. But to answer your second question, there’s a Group by Difficulty button at the top of the page that gives a general idea of difficulty level

I also remember stumbling across a post in the Satori discussion forum a while back ranking difficulty, but I find their forum hard to navigate so I don’t have a link right now, sorry.

Here’s my personal opinion about difficulty, from easiest to hardest (only includes stories I read). It’s been a while since I read some of these and I can’t see the full stories anymore, and some of these I didn’t finish b/c my subscription ended. But I hope this is helpful anyway!

And then after that, I have no idea. I would start with Sakura and Suzuki since that’s definitely the easiest one. If you’re having some trouble with grammar I suggest also looking at their Nutshell Grammar series.

I don’t know if you know this, but you can set it so Satori knows the kanji you’ve learned on Wanikani and adds furigana to any kanji you don’t know

I don’t know if you know this, but you can set it so Satori knows the kanji you’ve learned on Wanikani and adds furigana to any kanji you don’t know

^^^ This. You can also manually add additional kanji to your “known” list if there are ones you know from outside WK. 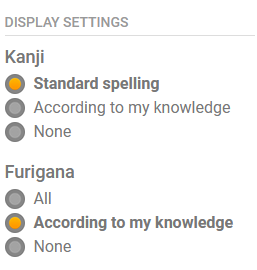 For what it’s worth you’re not the first one to complain about the Satori SRS and I don’t know how to use if effectively - but with WK and Bunpro in my life I don’t feel I can handle a third system!
In terms of stories, as mentioned above there’s an option to group by difficulty.
As you, the first time I looked at it I couldn’t understand anything, but looking back I was too ambitious and too green! For heavens sake, the first time I tried to read an episode I didn’t even know what a verb’s て form was!!
I was able to read through all of Kiki Mimi radio and I’m working my way through Kona right now. There are many words that I don’t know but now I can mostly follow the gist of an episode on a first reading, which was unimaginable back in the summer when I saw it for the first time!

Thanks for your detail response.

I had seen the group by difficulty button, but I had also heard that it isn’t a great indicator and of all those in the easy category I didn’t know which to start with.

I will start to chip away through that list for now and see how it goes.

I currently have my settings the same.

I would like to come across kanji I don’t know but have the Furigana only show when I’m unfamiliar with the pronunciation.

with WK and Bunpro in my life I don’t feel I can handle a third system!

This is my concern…

I’ve also heard people say that if you read enough you don’t need the SRS, as if it’s worth remembering then exposure should instil its meaning naturally.

exactly! And it’s so gratifying when you encounter things in the wild that you can actually deciper! 頑張りましょう！