Last night I read 14 pages of 三毛猫ホームズの推理. The cold I’ve been battling all week has taken over my sinuses and it’s oddly difficult to focus on reading when you can’t breathe through your nose. I finished out part 2 section 3 and stopped. This puts me at 41% read.

I didn’t post since Day 2, but I managed to read every day, mostly 博士の愛した数式 and I got to 27% of the book! I’m getting more and more attracted to the story and have to hold myself back from reading too much and neglecting responsibilities.

On Day 5 I read an article on yahoo news: 4年のブランクを経てカムバックした「BIGBANG」、新曲「春夏秋冬」は人々に受け入れられるか？, from which I might add the vocab later.

Today is the day that Hachiko (ハチ公 - the goodest of good bois) is remembered in his hometown of 大子内「おおしない」, Oshinai. 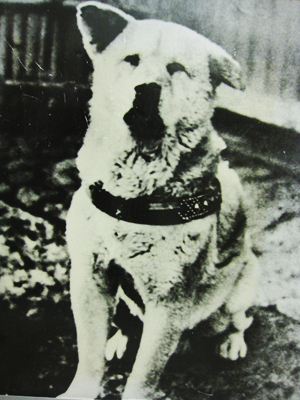 The dog who waited for his master to return for nine whole years.
Such a good dog, he’s got a statue and everything, every time I remember about him I just cannot take it

Reading felt a bit more fun today. Still not through the current booklet, but I’ll get there. (Ask graded reader, level 4, volume 2)

I’m currently reading the second book in the Seashell Cove Paranormal Mystery series I talked about, Haunted Witch. Really enjoying this one and I don’t have as much time/energy to read as I wish, but it also means the book doesn’t end as fast despite not being long books.

Still reading 夜カフェ.
Today I read the rest of chapter 11 as well as 4 pages into chapter 12. At the moment it looks like I can finish the book on Sunday and start the new week with a new book. I’m looking forward to it.
Also I read a news article on my Nintendo Switch in Japanese. While I didn’t understood it fully (I was too lazy to look up the unknown kanji), I was able to get the gist of it.
Also I noticed that I’m slowly becoming better at reading katakana.

I read a good chunk of よつばと today, I’m halfway through the first book. It really does feel good when reading is not a total struggle.

As promised to myself, I took a break from 三毛猫ホームズの推理 today and read a manga instead. I discovered Candy and Cigarettes by accident when I was idly browsing Bookwalker’s freebies some weeks ago, and so far I’m liking it a lot. There’s something about an honest upstanding citizen turning bad in his old age that appeals to me. Ditto for a cute and innocent looking under-age assassin. Add to that a shady secret organization run from a second hand bookshop, and there’s really not much more I need in a story to be happy. It’s full of fun satisfying action but what mostly keeps my interest is the delicate dynamics in the relationship of the two protagonists.
Look at the cute little angel nodding off after a tiring day of shooting down corrupt politicians after school . 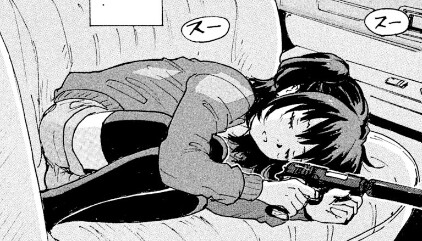 (I also read a little of 佐賀のがばいばあちゃん for the IBC)

I discovered Candy and Cigarettes by accident when I was idly browsing Bookwalker’s freebies some weeks ago, and so far I’m liking it a lot.

Just finished reading this week’s beginner book club part. Around 50 minutes before the day rolls over in my timezone. It actually went quite well I think, barely had to pull out ichi.moe to break down sentences and didn’t need to use deepl to understand them, which was nice.

Finished chapter five. Thoughts/note to self: Maomao really didn’t want to attract attention but ended up getting promoted from low-ranking servant to the princess’s (?) maid

Also was a bit surprised about this Jinshi person, seems like he could’ve been a model/idol with his pretty looks. Mysterious word of the day: , uniform of some sort??

Now (tomorrow) I can browse the week 2 thread, completely forgot to earlier today. Maybe people already talked about the part with the gates that I thought was confusing yesterday.

I was hoping to do a lot of reading tonight, but its been a bit of a tough day and I’m a bit unwell so I didn’t.
I read the next chapter of Teasing Master Takagi-san though, which means I’ve finished Volume 5

I read nine pages today and it is getting easier. I’ll start the fourth book in the set tomorrow.

April 8
お疲れ！ We made it to Friday!

I read 4 of the level-one graded readers just now because I’m not sure when I’ll have time later. I got my friend hooked on Yuri on Ice, so we’ll be watching more of it later tonight. The readers were good! All food-related lol. I’m getting better at recognizing cooking-related words.

Someone in one of my discords posted a link to a short story on a site called Novel Updates. It’s kinda like AO3 where there’s filters and tags to sort info. One of the tags is works that were originally published somewhere else, like syosetsu. Which I find useful because it means I can try to look up the work on Syosetu and read it in Japanese!

Started reading なぜ?どうして?かがくのお話1年生: 0% → 22%.
Read about yawning, forhead bumps and hematomas, stages of teeth growth, why we get a headache when eating cold stuff, why farts smell bad. There’re not many kanjis, but the text contains spaces, so it’s not so much a hiragana hell.
I’m trying out a new word processing routine: I add new words to a list on jisho when I look them up, and the export them as csv and append to my master list. Still not inputting them into SRS, as the idea of having to learn words with an SRS doesn’t appeal to me.

There was one simple sentence I’m not sure I understood, so I’d be grateful if anyone can clarify this for me. For context, the text is talking about wisdom teeth:

I was feeling a bit sick yesterday, so today I did a Covid test and it was positive

So far it feels like a heavy flu so I’m going to relax a lot by myself for some time (since my fiancé is not positive, so even in our house I’m isolated

Oh no! Take care of yourself; I really hope you feel better soon.

The cold I’ve been battling all week has taken over my sinuses and it’s oddly difficult to focus on reading when you can’t breathe through your nose.

Same goes for you. This club is starting to feel like a sickness magnet

Rather big Summer Pockets day! I did indeed finish Ao’s route quickly; I’ve been adding in a little extra reading at night and was less than 1000 characters away. It managed to really hit me at the end, so I have to say despite the grevances I’ve alluded to, I quite liked it.

Learning by reading like this, there’s really no way it can be approached but holistically, but do you all ever feel like you’re bouncing between certain parts of the language as what’s jumping out at you at the moment? In the past I mentioned struggles with onomatopoeia… recently it feels like it’s all compound verb time. I don’t necessarily mean I’m having trouble with them, they vary with a lot being very intuitive and some less so. I’m just really encountering a staggering amount of them recently to contend with in Anki and if my Japanese studies were characterized by anything right now, it’s sorting those out.

So now that I’m back choosing what I do each day, I can choose some of the silly side events I mentioned, and one was dealing with a beehive in an inconvenient spot. I got incredibly confused by the line “ハチの巣をハチの巣にしてくれませんか？” until I read on and the character said it was a 比喩 (metaphor/simile/etc) and some searching has taught me, if I read the Japanese answer correctly, that ハチの巣状態 and similar phrasings refer to how a beehive is full of holes. Interesting.

I’ve decided it’s time for Umi’s route. She’s the one non-romantic full route; a young girl who is the protagonist’s (IIRC) unspecified relative. Her scenes have always amused me and it’ll be nice to see what this game goes for when it’s not romance.

Following her also led me down a rabbit hole to an entire minigame tucked away behind inconspicuous side choices. Turns out, you can unlock a whole monster collecting and battling game, which gives you something to do each day when you’re not hanging out with someone as an alternative to the many side scenes. This game is loaded with optional content. It’s incredibly simplistic but I have to admit it looks addictive all the same. I spent a little too much time today acquiring bugs and fish and battling the low ranked opponents… which were mostly turtles, dogs, cats, anything but humans. 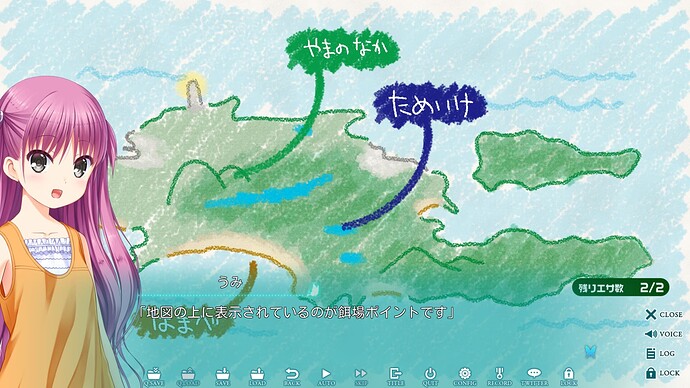 That map is kind of adorable. I only read about 5000 characters today, but a lot of that ended up being card game tutorial stuff, which got a little dense and used a weird font, so I don’t feel too bad.

I have too much to say today! Well to conclude, my favorite new word is 雄姿 (ゆうし), which intuitively means something along the lines of “magnificent appearance.” There’s a lot of meaning packed into that word.

It’s saying that there are people who “grow” wisdom teeth and people who don’t. I’m lucky enough to be the latter

Edit: See Nicole explaining this better below, since I kinda skimmed over transitivity.

there are people who “grow” wisdom teeth

Yeah you’re totally right; this was a case of being like “yeah I see what this is saying” and being a bit sloppy writing out the idea as it came to me – should have probably slowed down.

In case the えてくる part is confusing, it’s basically using the くる part to like… relate the verb to the person it’s happening to more closely? てくる and ていく work like that sometimes, to show the metaphorical direction of the verb, if that makes sense. It’s kind of an abstract concept that I feel like you mostly just get a sense for! But yeah it’s basically like えて is happening towards the person whose wisdom teeth are growing, which makes sense since your teeth are pretty directly connected to you

do you all ever feel like you’re bouncing between certain parts of the language as what’s jumping out at you at the moment? In the past I mentioned struggles with onomatopoeia… recently it feels like it’s all compound verb time.

Hmm I can’t really think of a specific example but it kinda sounds familiar. I think I’ve also struggled at times with compound verbs. There are times when I go into one of these phases of “wow I know absolutely nothing of this language” and I feel like a complete beginner again in so many aspects, nothing seems to click. But then I keep going and I come out of it like it’s nothing. Currently I’m having one of those phases where I feel I’m improving, but it goes back and forth constantly so I’m learning to enjoy both phases, weird as it sounds. Mostly because I’m starting to understand that bad phases are as important as good ones, if not more.

I swear learning a language feels to me like 5 steps forward 3 steps backward. I’ll go back to failing to recognise the easiest words and grammar soon enough, just wait