If there’s anyone reading ハピネス (or even better おかえりアリス), what do you think of the author’s style? Is there any chance things do get better?

I’ve only read the first volume of ハピネス and things develop very slowly indeed, so I don’t think I can have a rounded opinion on the author’s style yet, but I don’t think he goes for wholesome, and I wouldn’t expect things to get better (although I couldn’t guess how much worse they’d get either.) So far we have had (ハピネス volume 1 spoilers and possible triggers?) a masturbation scene triggered by a panty shot, unrelated to anything in the plot so far, an assault that looked very much sexual (although it was actually triggered by thirst for blood) which was waved off by the almost-victim as something normal and maybe even welcome, and vampiric instincts being awakened by period blood. Also bullying, and some physical violence. And friendships that seem about to go sour. All in all, anything but “happiness”.

Well, I guess I am starting to see a pattern here

I guess it’s wiser for me to drop it for now.

Edit 2: I keep forgetting stuff… I’m not sure what I’m looking at here. Any ideas? For context, 鬼太郎 enters a house, sees this, and comments there’s no one there.

It looks like an old, disheveled kamado… Is my only guess! 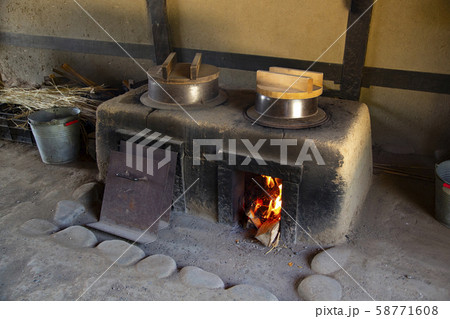 Read pages 38 and 39 of かがみの孤城. Again, fairly straightforward and easy to follow. I guess it was all the flashing back and forth between past and present that messed me up so much.
Seems like page 40 is where things get interesting/sad. I’m very tired and want to wake up early tomorrow to try flying my new camera drone!! so I’ll end it here for today and hopefully read a few more pages tomorrow.

I had planned to read some of the origin story about Emperor Jimmu「神武天皇」 today, but ended up reading about the shrine where he was said to have ascended the throne: Kashihara Shrine「橿原神宮」.

Which leads into two problems I’ve been having with reading (well, not really problems, just inconveniences).

Anyway, Emperor Jimmu is Japan’s legendary first emperor, while his existence is historically debateable (I mean it’s claimed he lived to 126/127), I always like these origin stories and find them interesting. I suppose it’s a bit like the King Arthur legends, he probably existed as a person at some point and in some form, but his exploits got exaggerated and altered over the years.

Kashihara shrine, located in Kashihara, Nara Prefecture, is the place where Emperor Jimmu supposedly ascended the throne in 660BCE.

maybe there is some magic secret way to filter Japanese only

Thank you! Knew that there must a simple magic trick to it

Will try this next time

Finished chapter 23 & 24. Which means I’ve caught up with the book club schedule

I’ll probably just keep reading at my own pace like I’ve done until now.

I haven’t decided yet, but being aware of it is a good first step.

I’d say why not read after you’re done studying for your exams for the day? You could go for any amount you feel like and since you’re not neglecting your studies you probably won’t feel guilty, while still allowing you to keep up with Japanese. [edit: rereading your post, you might already do this, woops!] I’d probably also stop new SRS words for a bit if you use SRS.

At the same time, nothing wrong with stopping the challenge if you feel like it’s taking a mental slot that you need right now. At the end of the day it’s an artificial thing to work in your favour; you can stop it when it’s no longer useful, and resume it when it is. You could also forget about the “every day” and go for whatever frequency works.

I feel like reading is taking too much of my focus when I should be focusing on studying for exams.

Same. Let me know once you’ve figured something out

but I still feel pressure to read more. And this making me stay up longer than I intend to. So, what to do?

I’m thinking of switching to manga I’ve already read or something else like picture books, the next time I feel burned out or pressed for time.

Basically anything fun and purposefully short, only to check the box

Didn’t have much time for reading yesterday and the day before (and no time for posting) but I did read one chapter of デスノート ・ Death Note 📓 Vol. 2.

Today I read a chapter for Week 4: 佐賀のがばいばあちゃん 👵🏼. I hope to catch up to that book club tomorrow…

Due to making replies to so many people, I put it under detail tag to make the post take less space.

@Naphthalene Thank you so much!

Started and finished chapter 4. It was a very short chapter, covering 2 whole pages and 2 half pages, but the two whole pages was just dialog, so barely as much text as 1 page would usually be.

But, due to asking for help earlier, I now had a similar sentence I understood perfectly. <3 All the help is doing such a difference. You guys are amazing.

I had a little problem with two sentences. I think I understand them, but for one, I wonder if there is anything I’m missing to make it clearer in who says what (I can figure out who has to say what, because of the story, but it wasn’t clear to me from the writing). And the first one has a confusing し that I’m not sure if it is the counting reasons し or another one my dictionary suggested (meaning: and, besides, moreover, what’s more, not only… but also).

Also had a ものか that I still remembered because I had to look it up before and shared it. This sharing thing is useful. ^^

Edit:
It is after midnight my time, so Friday:

I read a chapter of Shirokuma Cafe today. It was one of the longer chapters for this manga, at 11 pages.
I’m enjoying this manga a lot, there is something really relaxing about it.

Well indeed, I read quite a bit later yesterday. I also read today for well over 12,000 characters until I totally finished the Kamome route!

That took just a little over a week so if I can keep up this pace, things are looking good… I have 3 to go, and then however much remains for the big finale true end.

I really liked Kamome’s route a lot! There were actually a few touches I didn’t truly expect from where I was, and it ended up with enough weight to really hit hard, but still overall just very pleasant. And not in the pure romance way you might be expecting. While this game does have romance, most of the routes really terminate in helping the girls accomplish something important to them or helping them to work through something, which is a nicer payoff than it just being about the relationships. In some of them the protagonist could really be just as aptly described as a really good friend, minus a little kissing or something along those lines, heh.

As I said, I’m doing one more expected easy route and then the ones I was somewhat avoiding. Curious to see if they’re indeed noticeably harder. All the same, despite bumps in difficulty, I’m really starting to feel like I have Summer Pockets down. And I know I’m saying that after reading enough to fill multiple books, haha, but I mean less “yeah I can handle this” and more “this is a solid reading level for me” as in, it’s something I’m just comfortable with. Finally have that feeling that over the long run, this has kinda leveled up my abilities, constant new words notwithstanding. It’s both a benefit and a detriment as a learner that visual novels are so long. The good part is that I imagine until I’m very far out in my studies, the completion of most will take so much time and feature so much practice that I have to have noticed my progress by the time the end comes.

I wouldn’t forget to include a new word though! How about 回し者 (まわしもの), a spy or secret agent.

My favorite picture is when Ryou got his man! 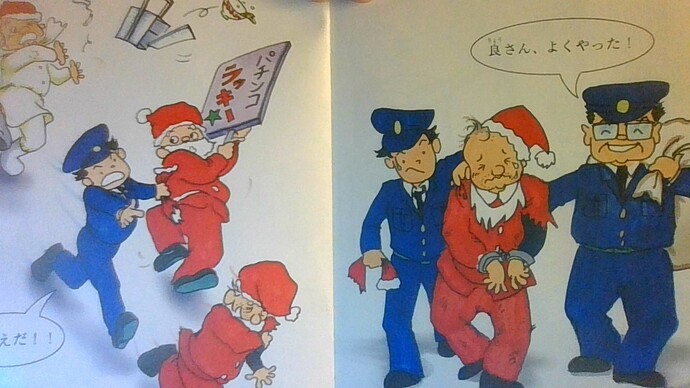 I finished the latest Officer Ryou book today. He, of course, caught the fake Santa, recovered the stolen goods, got the story and his picture on the front page of the newspaper, and got his girl a nice Christmas gift. Once again, Officer Ryou saves the day!

Tomorrow is another Ryou story!

Thanks for all the help.

Didn’t you say it’s past midnight for you, though?