I’d happily read more of the 三毛猫 series, and more 赤川 in general. I really liked his style of writing too, although I understand that it differs a lot in other books of his.

My biggest recommendations from what I’ve read of him so far are おやすみ、夢なき子 and 夜警. The first book has much darker themes, but it was so good I couldn’t put it down. The second one is less dark and has some supernatural elements.

Also you weren’t shocked by 片山’s sister stealing his money for an abortion?! That hit me out of nowhere.

Thanks for the recommendations, I’ll definitely check them out. I don’t mind darker themes, but I’m not sure about supernatural elements, it really depends on my mood and how they’re handled. I’ll read the samples and see, I guess, but that’s for later. It’s still fairly early in my Japanese reading journey, so I want to mix up writing styles as much as possible to keep me on my toes.

Also you weren’t shocked by 片山’s sister stealing his money for an abortion?! That hit me out of nowhere.

Okay, I never predicted that, but I didn’t spend much thought on that particular small mystery either. It didn’t shock me though. It was obvious there was something going on with her, and I’m just glad it wasn’t anything darker than that (because of course, (ending spoilers!) having your lover be revealed to be a serial killer and then committing suicide (not clear if she witnessed that too) after you just aborted his baby is not all that bad, right?

. I guess the body count was so high that after a while I started being surprised only when people survived.

Just kind of reread more and tried to make more sense of かがみの孤城 today. Even though I understand what’s been happening so far well enough (I think), I can’t quite get the timeline of the events.

Read about Jōruri-ji temple, which is in Kizugawa, Kyoto prefecture.

I did quite a lot of reading today! A chapter of Teasing Master Takagi-san, and then also a chapter of Yoru Cafe.
Yoru Cafe still takes a lot of concentration for me to read, but I read this chapter quite smoothly - still took me ages though!

I only read about 5 pages of 魔女の宅急便 but I managed to finish chapter 5.

Needed a break from 魔女の宅急便 today and read about 5 pages of 冷蔵庫との対話. This is the second short story of 齋藤孝のイッキによめる! 名作選 中学生.
So many vocabs I had to look up today. Although I got a good gist about what was going on, so that’s something.
I’ll plan to finish the story tomorrow and maybe read another short story of this book before returning to 魔女の宅急便.

Over the past few days I read Flesh&Blood, the pirate story.
Just finished chapter 1 (~40 pages), and so far I like it a lot.

I also like the language; it feels well-written to me, and it’s varied enough that I need to look up quite a bunch of vocab and also some grammar points, but it is not tiring so far.

Funny word of the day: すしめ (also written as 鮨詰め or 寿司詰め) - jam-packed; packed in like sardines

Also, I don’t remember how I calculated that, but based on the former 皇后’s appearance, she must have gave birth to the current emperor when she was ~10. (猫猫 even commented on “good job giving birth at that age”).

This made me reread that part again because I almost missed the fact that the current emperor’s mom was there (titles are confusing). Previous emperor makes me want to cry ;-; Those poor girls. Maomao’s comment was funny tho.

That also told me how much 猫猫 is an unreliable narrator. So far, I always believed her when she said she is “plain looking”, but based on everyone’s reaction, that’s not the case.

ohhh, unreliable narrator 0: I took it as her being just not very confident in her appearance. But I see what you mean, especially in one of the latest chapters I read where she was like “I’m currently donning a total poker face holding back my facial expression of disgust in front of Jinshi, especially since Gaoshun is also here”, but then we see from Gaoshun’s perspective being like “sigh such an rude expression every time she’s around Jinshi”. Ahh, that was hilarious. (I think you commented on it in the book club threads too.) The discrepancy in the characters’ perspectives, especially when it is this obvious, makes me really appreciate the change in points of view. Even if she’s pretty funny by herself imo, the other characters’ thoughts and reactions really highlight Maomao as a character

Day 23 / Calendar
I’ve read and translated this week’s ABBC book club material today. This took about 1.5-2 hours, the reading itself wasn’t too difficult, so it was a nice change of pace from reading 夜カフェ at 2 pages a day.

Just kind of reread more and tried to make more sense of かがみの孤城 today. Even though I understand what’s been happening so far well enough (I think), I can’t quite get the timeline of the events.

What I think it is so far

I think you mostly got it right.

I took the prologue to be an actual dream (or daydream) and I still think of it that way, but maybe a different interpretation will become possible later in the book

Kokoro is in her room, before attending the new school, having a flashback about a time when she was in primary school, about ミカワ青果’s truck.

This is the only part that you got wrong, I think. She does say something about hearing the truck during holidays when she was in primary school, but the scene itself takes place after she has already attended and has stopped attending middle school (こころは学校を休むようになって). The reasons for that will become clear later.

If you haven’t yet, check out the first week of the book club for some elaborate discussions of that first part.

Finished chapter 18 and 19. Posted about ch.18 in book club thread, and whoops I wrote more than I thought I would but at the same time didn’t cover ch.19 at all. Too late now, gotta go to sleep.

Was surprised when this word appeared, the one making people wanna quit WK: 河豚 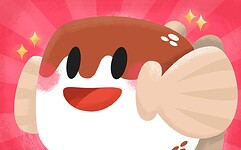 Today was a family day, so not much time for reading and I read 5 pages for かがみの孤城 🪞 Week 22

Hmm. Today was ok. I had time and a lot of enthusiasm so I wanted to read a bunch, but I stopped (for now?) at 6000 characters because it was getting harder and I can tell when I’m wearing out. I don’t get so exhausted from reading like the old days (usually) but there’s a point at which I start mixing up or not recognizing more words, I start more automatically pushing Yomichan on everything, etc. This sentence is one the toughest the whole game has had:

As kind of a joke about something totally unrelated, the main character went into this exaggerated sports talk for a few sentences. The grammar isn’t crazy or anything, but that features 6 or new words for me. They even furigana’d that last kanji word, which is rare. I essentially see what it’s saying but that’s basically from looking up every other word then trying to hold all these English approximations in my working memory at once.

I must unfortunately say that the maid outfits arrived today 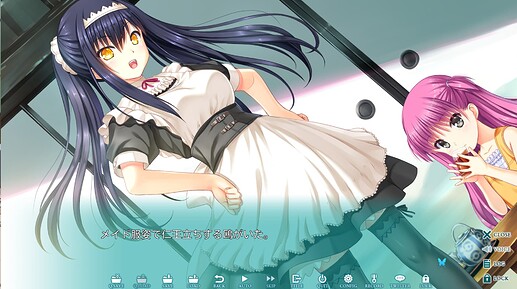 I think it’s a rule that most visual novels have to throw in maids at some point. I’ve… never gotten good vibes from the whole maid thing Japan has going on. They seem to show up a bunch in these games; I think the maid cafe stuff was probably part of why I stopped Steins;Gate (the VN) years back. I’ll give it another try someday, heh. Here at least there’s no “let me serve you, master” stuff; she just throws this outfit on while helping around the house and it mostly seemed to be an excuse to draw this picture. Anyway, all that aside, Umi has a weird way of holding a glass.

That’s about it from me. I think I’m getting better at reading, bit by bit. There aren’t even too many exciting new words so I’ll just say today’s word is 躊躇 (ちゅうちょ), hesitation. I think I know the verb version 躊躇う (ためらう) well enough by now, but I keep coming across this one so it’s time to finally learn it. Those are some wild, intricate kanji.

I’m currently donning a total poker face holding back my facial expression of disgust in front of Jinshi, especially since Gaoshun is also here”

I even screenshot the illustration in the manga (not that one scene specifically though).

I started Book 12 in the Level 0 Graded Readers, the last one in this set. It is a lot of data and demographics of Japan. I read 8 pages, and this book is a little harder than the others.

112-160
Just 35 pages left. My tolerance for non Dio pages is seriously low. I think I seriously am going to need to skip part 3 and read 5 first to see if I can increase my speed and tolerance… I think in between though that I might read my shark field guide or finish Ojisama to Neko. I think I have 3 vol left… maybe not then. Maybe just a volume

Back to vol 3… the art is so much nicer compared to the first two volumes. I wonder if Araki got an assistant around this time. 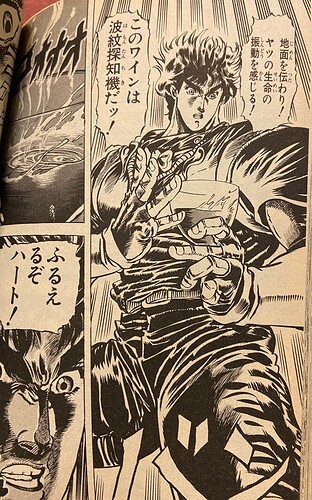 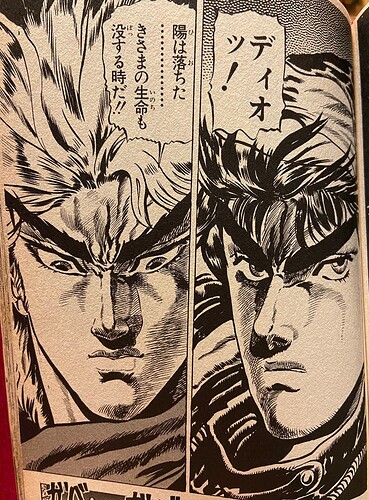 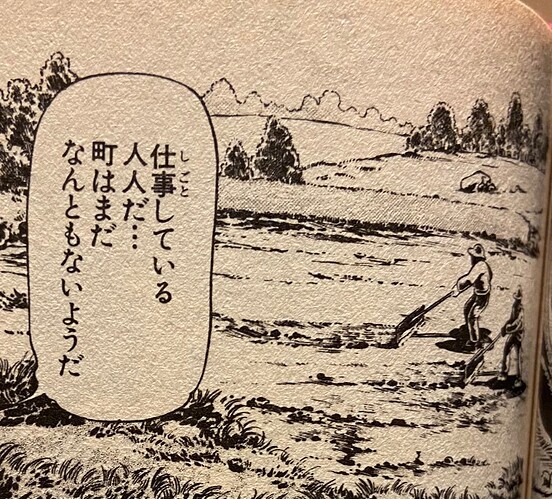 This is the only part that you got wrong, I think. She does say something about hearing the truck during holidays when she was in primary school, but the scene itself takes place after she has already attended and has stopped attending middle school (こころは学校を休むようになって). The reasons for that will become clear later.

Ah, that makes more sense. Thanks for the clarification!

If you haven’t yet, check out the first week of the book club for some elaborate discussions of that first part.

Oh man, too elaborate for my current reading level

Sold something very important (materia) by error and wasn’t sure if there’s a way to buy it back… doesn’t look like there is. Very smarto c: I quit without saving so will have to replay tomorrow what I did today, which is alright because it wasn’t much. Old games are fun!