Hi everyone!
My studies tend to be all over the place so I thought making this study log might be a good way to keep things more organized. I also tend to be pretty forgetful so hopefully writing things down more will help with that.

Will probably change some as things progress

I’ll try and post here at least once a week about what I’m studying and my progress, most likely along with a lot of random thoughts and things I find interesting while I’m studying. Feel free to drop by anytime! よろしくね~

One of my big goals right now is to get better at reading, here I’ll keep track of my overall progress so far this year.

I probably should have considered that I wouldn’t be able to keep up this schedule while on a trip. I think until I get back I’ll focus on reading and listening practice and maybe crack into Tobira. I’ll leave Wanikani on vacation mode since I haven’t been able to consistently do my reviews. Unfortunately I’m currently stuck in self isolation with covid, not great for my trip but I guess I’ll have plenty of time to study now. On a more positive note, made a new little friend 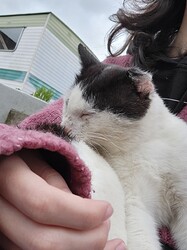 Unfortunately I’m currently stuck in self isolation with covid

Oh no. I hope you recover quickly and fully. And that it happens during a trip can’t be fun at all.

Your new friend is super cute. I admire people who manage to make friends of random kitties while traveling or out and about. Most cats I meet seldom want to get close.

Thank you! And I usually have a pretty similar experience this guy was just extremely friendly, he’ll follow my family on walks if he sees them

I’ll try and post here at least once a week

So much for that

But now I’m back! And I’ve suddenly realized the JLPT is in less than two months so it’s really time to get studying. I picked up 新にほんご５００問 N3 and I’ve started going through those everyday. Doing that I’ve realized once again how all over the place my grammar is. While working on those I’m going to continue through Tobira and hopefully finish both before December. From looking at practice tests, listening and reading seem mostly ok but I’m really bad at picking up numbers when listening so I need to work on that before the test comes. One of these days I’ll try a mock test with the same time limit as the real test and see what sections I need to work on the most.

As for Wanikani, adjusting to going back to school left that pretty on and off in September so my first fast level wasn’t so fast, but I’ve managed to get it mostly back on track. I already know at least one reading of most of the kanji on level 44 so it’s going pretty smoothly, hopefully that will continue for a bit since I can’t seem to remember most of the more complicated mnemonics well.

Some boxes for more motivation.

This weeks listening practice: This playthrough of Kenka Bancho Otome

Week of October 16th
This week I have a good amount of free time so I want to try and squeeze in some extra study before I get busy again. I tried a mock test for the N3 and it went well, out of all of the sections I missed the most on grammar and listening so I’ll shift more focus there after this.

Week of October 23rd
Last week I ended up doing a lot less than expected, a lot of it probably because I managed to completely destroy my sleep schedule. Slightly more fixed now so hopefully this week I can get back on track. I do have a Physics test later this week though so I won’t be able to get as much Japanese studying in. As for studying for the JLPT, I realized doing the practice problems for the N3 that I need to focus some more on keigo.

Week of October 30th
I think I’m going to drop Tobira for a bit, I’m not making much progress through it. Plus I’m coming up onto another exam so might need to slow things down a bit for a while. On a personal note, I’m starting a volunteer position looking after chickens this week so expect chicken pictures

Listening this week:
Going to try listening to some drama CDs I got as extras with some games

It’s looking like I’ll be able to go to Japan this December so it’s time to get back to italki lessons and get some speaking practice in. I always avoided speaking practice because I get way too anxious that I won’t be able to come up with anything to say and then can’t bring myself to start so I just booked a bunch of lessons so I can’t avoid it anymore. Had my first one today and it went well. We had a good chat about places we’ve been on trips. Learned that snorkeling is シュノーケリング and struggled with the pronunciation of that for a bit lol. Also struggled a bit with counters in output, I’ll know the first one and then not how to pronounce any of the numbers after that. My pronunciation was complimented though which made me really happy. Hopefully after a while I won’t get as nervous before lessons.

Nice to meet you, Pyoro! I never saw your study blog until today. It seems like a marine biologist could find a lot to do in Japan!

I’m rooting for you with the N3!

Hi Shannon, it’s nice to meet you, thanks for stopping by! I’m definitely planning a lot of aquarium trips when I go, I’m excited to learn more about the creatures that are native there. From your log it looks like you’re taking the N3 as well, good luck to you too! I can’t believe there’s only a month left now.

I can’t believe there’s only a month left now.

Egads!! OCTOBER FLEW PAST!
I can see now that I’m basically gonna have to punt. Dang it!

I won’t be able to finish Genki II or my Nihongo Sou Matome N3 review books!

Week of November 6th
Had an exam at the beginning of this week so I didn’t get much done then, but now that’s done and I have a day off on Friday so hopefully I’ll be able to get some good study in then. Also got my info for the N3 test so now I can start planning for that. I’m currently debating between staying the night before in LA or making the long drive up there the day of.

I’m gonna take it easy on the studying this week. If things are looking up later in the week I might go over the problems I missed in 新にほんご５００問

The new Jack Jeanne novel comes out tomorrow so things are looking up there at least, I think I’m going to slow down some of my other books to pick that one up.

Edit:Things ended up being worked out for the most part so I’ll probably be able to throw in more study this weekend, maybe an italki lesson or two. 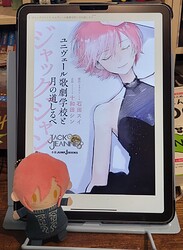 The cover’s so pretty

I’m not able to get much in for another few days but I can’t wait so I’m just going to start it. The first novel was the first book I ever finished in Japanese so it will be interesting to see how I’ve improved since then.

Things have been hectic for the past few weeks with finals and the JLPT so my studying hasn’t been very consistent over that time. Now that the JLPT is over things have calmed down a bit so I’ll probably restart my normal study but a little less until after the end of next week.

As for the JLPT, it went well I feel pretty confident in my score.
I drove up to the city early so I’d have time for breakfast before heading to the test site. The test was at a university so finding parking and the building where the test was was a struggle, I got there on time and still almost ended up late for the test

But after running after some of the similarly panicked looking people I managed to make it on time and everything went smoothly after that. My testing room was pretty small and there were probably only around 20 of us in there. I think I did best in reading, I ended up with enough time to read all of the questions through twice and still have some leftover. I probably did the worst in listening, I zoned out a bit through some of the questions and there were some words I didn’t catch.

Now I want to start working on material for the higher levels. I picked up 新完全マスター N2 and I’ll add that to my daily schedule. Drew this daruma an eye with the eventual future goal of passing the N1, no idea when it will end up but hopefully he gets his second eye someday. 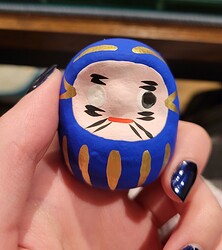 Another consequence of the past week,

Time to get to work on whittling these down

Sounds like you had a fun day despite doing a test!

I’m a bit jealous of people that have Japanese restaurants within a reasonable driving distance.

Good luck on the review pile. Been there, done that. Hope the burns goes well!