PSA: Before you reset both 回る and 転 back to Apprentice like an idiot

This is for all of you people who commonly mix up mom/dad and left/right in English like I do.

From Washington State University’s List of Common Errors in English

In ordinary speech these two words are often treated as interchangeable, though it’s “revolving credit account” and “rotating crops.” Scientists make a sharp distinction between the two: the earth revolves (orbits) around the sun but rotates (spins) around its axis.

So… for those who remember via pictures and wordplay like I do:
The Minecraft planet orbits around the block star in a square revolution. 回る

You rotate the wheels of your bicycle (自転車) at super speed, which creates a cloud behind your self-powered rotation vehicle. 転

For the record, this happens every time I get a word that colloquially means the same thing, but denotatively means something different. It just so happens that this one got so jumbled in my head that 転 dragged 回る down the mountain of enlightenment because I refused to use the “to turn” definition because that’d mean I’d get 転 incorrect forever.

Are you also aware of the custom synonym option?

Yes, and I do use it for words that I thing deserve it like 学者 when I added an “Academic” as a synonym for a “Scholar,” but I felt like these are definitively different words that shouldn’t be used interchangeably.

I am still messing this one up because my brain is being a butt about the difference, but it is important like it was with my Greek Philosophy exam in college. I usually remember names with the first and last letter, but that did not help when 4 people began with P and ended with S on that one. I knew the subject matter very well, but who dunnit? Pssssh…

From a geometry perspective, there’s just rotation. The rotation might be around an axis that passes through the object, or the axis of rotation may be somewhere outside the object.

That doesn’t seem quite right. Things can surely 転 revolve around a point without 回 rotating, like the cabins on a ferris wheel, say. 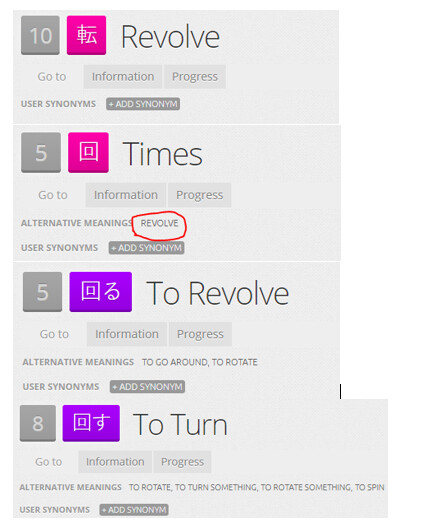 回す is the only one defined as “to rotate” now
or was it always that way? I always had(have) trouble with those