Matt vs. Japan on Wanikani: Do you agree?

ダニング＝クルーガー効果 is very much a real thing.

Too bad it’s not a 症候群

. Maybe there is an associated medical condition?

Speaking of the video itself, yes, it’s a little suboptimal to learn kanji readings out of context, but in retrospect they are meaningful. If one learns readings from vocab alone, in my understanding the brain would associate specific readings with known vocab items primarily and trip up on new words containing known kanji with known readings. At least that has been my experience post-WaniKani.

Regarding learning specific kanji meanings in isolation which RTK advocates is even less useful, because kanji often cover a range of meanings.

That’s followed by a link, so perhaps he has different thoughts on WK and kanji in general right now.

I’m going to ignore the part on Kanji fluency which basically sounds along the lines of: once you understand enough kanji you don’t really need to put in as much effort to deal with them. Then he goes into a section on current kanji methods starting with a really old school “here’s the kanji we’re learning this week style”. Something like hitting the kanji section in the back of genki and getting a completely out of context learning method.

The other methods [RTK/WK or brute force vocab that have kanji in them] both work and have different pros and cons. The first way, which is the way I have always been a supporter of, is the kind of RTK style and this is where you start off learning to view the characters in terms of their components and through that it makes them a lot easier to remember. And once you’ve memorized a certain critical mass of characters you’ll end up naturally reaching this point of kanji fluency. So RTK is an example of this, KKLC(?) is an example of this, and also even methods like WaniKani technically are an example of this. Although WK I don’t recommend because it’s way too slow and teaches you way too many things at once out of context and just ends up being really inefficient. And it’s way too expensive…

His current method (I’ll admit I might not be following him entirely) claims to be a middle ground between RTK/WK integrated into a vocab deck. Really, it just sounds like he’s snagged some curated words that also happen to have kanji and you really are only supposed to grade your performance on the card by it’s meaning, but also quiz yourself on the reading… Look, for a 15 minute video the description of JP1K is only a minute followed by another five minutes of justifying something he’s barely introduced.

Edit: Probably a better way of summarizing this, it seems his deck is made of cherry-picked vocab words that do double duty of learning kanji. His thumbnail for the video shows an anki card that uses 事 as example, but he didn’t even edit in a single example into his video while giving his rushed explanation. Really, the refold site explains it better than his long ass gaming the youtube algorithm video https://refold.la/japanese/deck/?utm_source=youtube&utm_medium=social&utm_campaign=JP1K&utm_content=jp1k_video_1

So it’s essentially a slimmed down WK vocab deck from what I can tell.

If this is supposed to be sales pitch it’s a complete joke. And he called WK expensive? Even at full price I’d still consider WK a cheap hobby for an adult. Expensive if you cater to an audience that wants to do everything as fast as possible as cheaply as possible regardless of the time commitment, but what else would anyone expect of students? I happen to engage in a lot of Japanese content that’s free, but for anyone into anime/manga/games that probably runs way more than WK in costs. Even a Crunchyroll sub is $8/month where I’m at. Undiscounted WK is $10.

Edit: I saw he wants $19 for this deck. WK runs like 120 vocab words per level, so about 8-9 levels worth of vocab content which is… 3 months of WK for me (actually 2 when I was a complete beginner going at 1 week/level, but I’ll be nice here). It’s not even cheaper since I have a 50% discount and WK had the radicals/kanji content which made it way less frustrating to me than this approach.

He is a scammer. I made a topic about him and someone reported me because I was attacking him (either a fan of his or Matt himself after word spread out Lol).

Don’t listen to anything he says.

Beware of Matt vs Japan WaniKani

I’m making this post for those not aware of what has been happening behind the scenes with Matt vs Japan. If you like Matt and disagree with this post that’s fine. However, I feel people should at least visit the links I have provided to reach your own conclusion. Matt doesn’t give a damn about your Japanese. He only cares about profiting as much as he can through his so called “secret”. You don’t need perfect pitch accent to be able to speak and understand Japanese. Want prove? Take a look at …

someone reported me because I was attacking him (either a fan of his or Matt himself after word spread out Lol).

I wouldn’t read too much into it. You got a little too eager, people reported it, the thread got locked.

Hopefully that doesn’t happen to this one

He mentioned on a stream with George that he doesn’t agree with his old vid but he still doesn’t like WK. I think he said that he thinks it’s too slow and expensive

This video was already previously discussed in here.

I just became a subscriber ! But I just saw a video that threw me a bit off WaniKani

Hello guys, this is my first post and I also just became a subscriber to begin my Kanji learning journey. I came to Wanikani because a friend of mine recommended it to me and told me what a nice and helpful community it has. I’m fairly new to the Kanji learning community, I just finished Genki 2 so I decided to begin Learning Kanji seriously now. Anyways as I was browsing the net about Kanji I came up to this video that I found very well explained, It seems also that it was just released. I w…

Btw, his current JP1K deck for Kanji isn’t even his idea. Lots of people did it before him. Actually I had a subscription on Nativshark long before he announced his own deck and they use that exact same method for Kanji on their site. I also have the JP1K deck because I wanted to see it for myself since he advertised it kinda similar. It’s basically just another core 2k/6k deck but this time it’s only 1k words and you pay for it and the words are the most common words from slice of life anime. I spoke to George on Discord and he said “I know he didn’t create it.” “Matt doesn’t seem to have original ideas. It’s unfortunate.”

I don’t really see the point in all of this. First, why a post on Wanikani to ask if people here like Wanikani ? I think most people here like it.
Also, I think we should consider his opinion on this because it’s also important to see what are the limits of Wanikani.

Moreover, while I understand that some don’t like Matt is it okay to go wild like this ? I understand why some posts got reported or deleted because I don’t think so much hate is going to help anyone. I personally don’t watch Matt’s videos at all so I can’t judge him. But honestly, I hardly watch videos about learning Japanese because they don’t really fit my needs or the method I want to use for learning Japanese. And also, well, they try to sell their own methods. I won’t call that a scam but it may not suit your needs, and could be overpriced compared to other methods. In my case, I saw Yuta’s videos and I don’t agree with everything. And I also hate his assertive behavior. For example, he made videos about pitch accent, and while it’s important I think it’s not the first step or learning Japanese. I mean, my teacher waited until I passed N3 to talk about my terrible accent and pronunciations. But until then, he could still understand what I was saying. I think Dogen is an exception and I like his more humble behavior (his jouzu video was quite something).

I think if people want to raise concern about Matt, or anyone else, it would be great if people didn’t go wild. I know that for the subjects I saw, the OP was respectful but the replies escalated so quickly. Also, do we need someone else approval on what we do ?

If Matt or anyone else doesn’t like Wanikani, good for them. If it works for us, then we should just do it. Even the best tools can’t suit anyone tastes or needs ^^

That’s also most of the refold platform isn’t it? I wasn’t here when it debuted, but I remember reddit’s shtick being core 2k + skim tae kim + read/mine with anki for years before it even came around. Edit: Seeing the post below, makes perfect sense. I don’t exactly want to hang there though.

I do think there’s value in improving on existing material, but it certainly doesn’t seem like he did much in that regard. Even if he did, his way of presenting that value to consumers is… not great.

That’s also most of the refold platform isn’t it? I wasn’t here when it debuted, but I remember reddit’s shtick being core 2k + skim tae kim + read/mine with anki for years before it even came around.

I do think there’s value in improving on existing material, but it certainly doesn’t seem like he did much in that regard. Even if he did, his way of presenting that value to consumers is… not great.

And here we see exhibit A

I just don’t know what you’re talking about, nor what you mean by your comment towards me.

Th-they got me. They’re trying to cover it up…

I don’t think we need to treat it like Voldemort, so at the risk of outing myself as even bigger idiot by getting this wrong it’s 4chan. Actually a great place for skills development and pioneered massive chunks of modern social media… but it has its ugly sides. And reddit probably takes the cake for most stolen content from there.

I did Lol scammers piss me off that’s all.

I feel the dudes very sensitive to his online image, and made the mistake of responding and even going after people who criticize him. That being said, I think that like anything, you have to find the right balance of criticism of people because if you do it too much, make things up, or do so in a way that comes off as mean spirited, you wont win people over.

I just don’t know what you’re talking about, nor what you mean by your comment towards me.

I’ll try to be the helpful, vaguely aware passerby here, though there’s no guarantee my guess is right. Vanilla’s comment about ‘exhibit A’ simply meant that like you, most people don’t know/remember what that ‘controversial community’ is, or don’t identify them as the ones responsible for the idea mentioned earlier, or the ideas mentioned by Matt, for that matter.

As for who that community is, if I had to guess… I’d bet on the AJATT (All Japanese All The Time) community, which also has links to MIA (Mass Immersion Approach), which I think was meant to be an improved version of the AJATT approach.

If I’m wrong though, then yeah…

I don’t think we need to treat it like Voldemort, so at the risk of outing myself as even bigger idiot by getting this wrong it’s 4chan.

This also seems quite plausible. 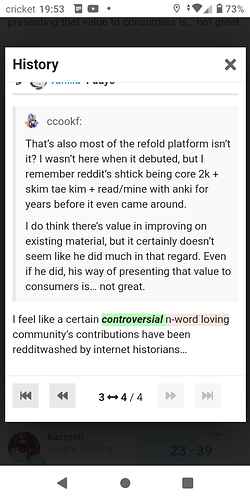