Mark the date as a day of national grief:
July 2nd, the day where my WaniKani streak of 547 days ended

I love to see the gif getting longer!

July 2nd, the day where my WaniKani streak of 547 days ended

To mark June 23rd, and rising to level 23 soon, I’m going to use today to join the race.

after a chaotic 25 days, I have finally cleared level 8

checking in to say I’m getting back on track but dialing it down to a more leisurely pace. I’ve got around 4-5 days of leftover vocab to go before beginning the level 9 kanji~

Hey, and sorry for late reply! With JLPT cancelled in my city, I had to travel and take it in another site, so it took some additional time.

そんな女神は?! I don’t get this feeling with any of my teachers

Seriously, I really love to hear that she accommodates for your needs!

Yup, she’s amazing. Still, she was my 6th teacher, i.e. it actually took some time to try different ones. With lv60 reached and JLPT over, I hope I’ll have now a bit more time and maybe continue my search. You may want to do it as well, meeting new people is always exciting, and one day you maybe think “wait, I want to talk to this one again” too.
Here I just want to double this line of @truandissimo

since it actually relates the case of my teacher; 1k+ completed lessons may be good sign as well.
Speaking of which, guess I have to thank @truandissimo himself personally for introducing me iTalki in details back then 6 months ago. That was very inspiring and who knows how long would it take for me to start speaking practice otherwise!

Excuse me prying… what programming do you do? Are you a web developer by any chance…

Nah, unfortunately my field a bit more specific with making industrial robot/measurement instruments firmware/software for scientific data analysis. Not something lots of people see. Still, I’m writing with C/C++/C#/Python, so in some extent that could be just the question of specific framework set in particular project I may need to get used to. Time of conceptually different programming languages is gone. Now everything is a flavor of C++.
Still, for developer with precisely web 実務経験 you may want to poke @koro-san who has been involved in ecommerce development for quite long.

Thread by @jonmoxley here that explains everything

Ah, thank you! Introduction looking nice, guess I should take a peek at how is it going there now. Maybe you have recently some own posts regarding your experience there? I feel like I want to hear a bit more regarding what I can get there before actually hop in.

At some point I’ll have to switch up my routine, and there are many later-level kanji that are slipping from my brain as we speak so I’ll have to put some time into WK sooner or later

Good point! Actually, this brings up an issue that I initially came to WK forums with and made my first post back then: New People Questions! ~~~<3 [Lost?! Confused?! We're here to help!] - #1845 by username21
Without regular practice, kanjis and vocab inevituably leave your mind. Still, WK is a threshold-limited service, so they seem to just can’t say “you’re here forever!” since it’s ruin their selling model. So they made their own flavored “SRS”-like system.
Fortunately, I manaded to find a workaround for this issue, so I’m not complaining much about Tofugu way of making money (which they’re totally deserve!).
The workaround actually is just this [Userscript] Wanikani Item Inspector script which I feel to be extremely crucial for past-graduation WK experience. I feel it much less known than it deserves to, so I want to talk about it. Aside of other stuff, main feature I use it most for is to export burned kanjis/vocabs to my Anki decks. Anki has properly made solid SRS system implemented with items there actually living forever. So after I burn items in WK, I export them there and can rest assured I’ll never lose them. And if I forget some of them, Anki would just bring it up one day.
Not to mention, Anki can make whatever cards you want. Like, for my vocabs I have JP->EN card, EN->JP card, writing practice card and hearing card, i.e. audio->JP+EN.
Ah. Here comes second one tool I wanted to introduce. Yup, mine “secret jutsu” are not something groundbreaking, but rather some tweaks for already well-known stuff. So yeah, audio->JP+EN cards for hearing skill training. The idea was inspired by this Cure Dolly’s video Why study doesn't work; and what does. The One-Deck Strategy. - YouTube where she introduced TTS plugins for Anki. After a bit of investigation, I discovered AI made a great leap in last few years with voice synthesis, so by now it actually can produce something practically useful in daily life. Particularly, you may want to check out AwesomeTTS - Add speech to your flashcards - AnkiWeb this one. From all the services provided I suggest to start from Oddcast service, since I got the most pleasant experience with its voices set.
I feel it incredibly boosted my studies, since hearing my vocabs and sentences is very crucial for human’s brain and we remember new words much better when we hear them in some context. With TTS feature now I can easily make clearly pronounced lines, and lots of times I see some vocab, first I recall not it’s meaning, but hearing in context first - and only then I “ah, it was in that sentense!” which brings me to the meaning.

Maybe these two features could look small, but for me they have a huge impact, and I barely see lots of people talking about it, so I figured out I have to mention them. And say thanks to @prouleau (author of Item Inspector WK user script) again - I feel his script has the most cricual impact in after-gratuate WK experience. Like, you know: in long-term run it’s more important not to lose something that you already have, than to obtain something new. @MegaZeroX mahjong master should be familiar with this concept, I guess?

Unfortunately, I’m unfamiliar with names of TTS authors on WK, still I feel I owe them a lot as well.

Last thing I wanted to share is my grammar reference book: https://www.amazon.co.jp/Handbook-Japanese-Patterns-Teachers-Learners/dp/4874246788 which I was introduced to accidentally 15 years ago by some passing-by teacher in local Japan Foundation office, that I never met again later - but I owe her extremely soooo a lot for this one! This is real grammar treasure Bible carefully made by native linguists, and in 2015 it was finally translated to English making it extremely easy to use.

Same here. Would be looking forward for your and everybody else 卒業者’s post WK experience. WK was a huge help to short-cut the labor to stuff all these kanjis into my head, which is the basis of language. But Japanese doesn’t end here and extends much further than this basis. And despite having so handy tool at kanji-learning run, unfortunately there seem to be not so much short-cuts and obvious solutions on the way further.
So I think it would be great to get in touch from time to time.

On my behalf, I just pray for borders to open for at least few months this autumn so I can sneak into. Will try to keep reporting my progress!

(oh God, what a wall of wordmess I made… sorry for time stolen from whoever had to read all the above)

Congrats! You just flew to the top!

Thank you! Yup, that was exciting rush!

Like, you know: in long-term run it’s more important not to lose something that you already have, than to obtain something new. @MegaZeroX mahjong master should be familiar with this concept, I guess?

But in Mahjong, it is the opposite. Knowing when to throw away core pieces of a hand you are building to go for a new one (or just to defend) is what separates the pros from the amateurs. I am bad at this, which is precicely why I am not a Mahjong Master.

Fatigue got me pretty bad this level. Not proud, still got a big review queue to get through before I take care of the new lessons.

I can worry about it tomorrow.

But in Mahjong, it is the opposite. Knowing when to throw away core pieces of a hand you are building to go for a new one (or just to defend) is what separates the pros from the amateurs. I am bad at this, which is precicely why I am not a Mahjong Master.

Makes me want to start reading a Mahjong manga

Akagi is a fun gambling mahjong manga while Saki is a cute sports manga.

I wanted to start Saki a while ago but never got to it.

Mahjong is one of the sports I haven’t touched in manga.

What I was talking about is defence strategy in general. Core idea to win full-length hanchan (I hope, we’re talking about Japanese Riichi/Reach Mahjong here, right? One played in Saki, Akagi, etc) is rather to keep the points you managed to obtain rather than gamble to get even more points. Since it’s turbo-easy to lose ones and deal-in to someone’s other declared riichi; on the other hand whether you will complete your hand or not is just a whimp of a random.

On the other hand again, there are relatively lots of defence techniques to keep your points safe until the momet you get decent hand that can leverage your overall score.

I believe, it’s essential concept for life in general as well. To keep what you have with a small effort and wait proper opportunity to elevate, instead of gambling recklessly and loosing your assets and not obtaining your gambling prey.

This is core of SRS system as well when done properly.

On the other hand again, there are relatively lots of defence techniques to keep your points safe until the momet you get decent hand that can leverage your overall score.

Of course I’m talking about Riichi, but I thought you were talking about individual yaku, which sometimes you should throw away for defense. Of course, that makes sense for points.

I levelled up to lvl 44 today…

Glass half-full mentality! You’re only one level away from the Second Observation Deck!

Ah, what a delightful view to see list of promoting items lasting beyond the screen: 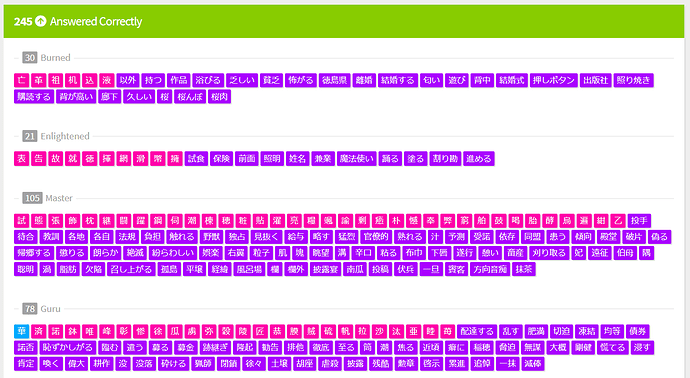 Such a long few-hours-in-a-row review sessions are a bit exhausting, but the view at the end is totally worth it.

Thank you as always for your great animation and stats provided!

That being said, now I wonder what would be a next climbing thread? I swear, this concept was great and extremely helpful, so it should be inherited in some way to assist new durtles. Too bad I won’t be able to participate it though. Some activity for lv60 durtles maybe? Anyone?

Level 30, halfway up, and the first observation deck is in sight too.

Burns started coming in recently, the additional workload is quite ok so far.