Also, a small (or actually, pretty big?) reminder that MaruMori’s discount will be decreasing soon

We’ll slowly be decreasing the price as we work towards launch and get more features and content in there!

Possibly already asked - will there be a monthly payment option?

Eventually there will be both Monthly and Yearly subscriptions.

Marumori looks super interesting. Like what Etoeto was supposed to be I guess? Is there any way to disable Furigana? It’s super distracting.

If there isn’t, then a workaround is to install “User CSS” or a similar browser extension, and add this for the site:

Or if you want to still be able to display furigana when hovering your mouse over the kanji:

(This solution is probably not very useful for tablets and smartphones.)

Hey! Thanks for giving MM a shot!

Right now there isn’t just yet, but we do have a task for it on our priority list. This would come along with other grammar lesson options like being able to set the text size, hiding english translations of example sentences and so on

My question would be whether it makes sense to actually keep both lifetimes since I am not naive that only WaniKani will help me learn Japanese, but if the MaruMori could become an excellent supplement for grammar, reading/writing later on once I get grasp of Kanji.

I don’t get you, once you have lifetime, it is lifetime*.
You don’t have to do them both at once.

At least I thought I had missed them. But no! It’s new feature and I LOVE it!
I took me a few days to get my bearings on MM but now I got the hang of it.
This new feature and the lesson about は and が convinced me to become a lifetime subscriber.
Yes, I do have the annual subscription for JFZ as well… don’t tell my husband… but wait… he recently bought a new gadget for his hobby, so… I am totally fine with what I did to my bank account because… equal rights I guess…

MaruMori aims to be your all-in-one package for learning Japanese, but is still a bit early in development. I’m super biased as I’m the creator of the website, so I don’t really feel adequate to say anything about you keeping or getting lifetime for both. I’ve personally used WK and it’s been a great tool for me

Really glad to hear you like it and thank you so much for the support!

But no! It’s new feature and I LOVE it!

Yeah, today the conjugation drills landed! I was in the middle of writing the announcements when I got interrupted and had to be away for a while

Always wanted to really nail (or well… drill) that pesky て-form? Or that polite past negative progressive form for う-verbs in particular? We’ve got you covered!

Here’s a look at the available options: 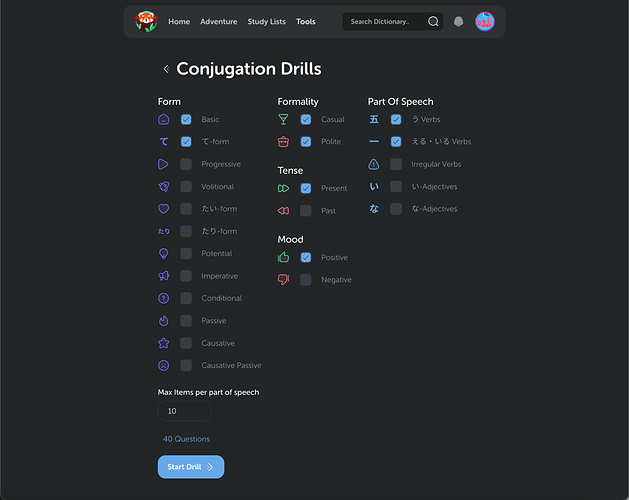 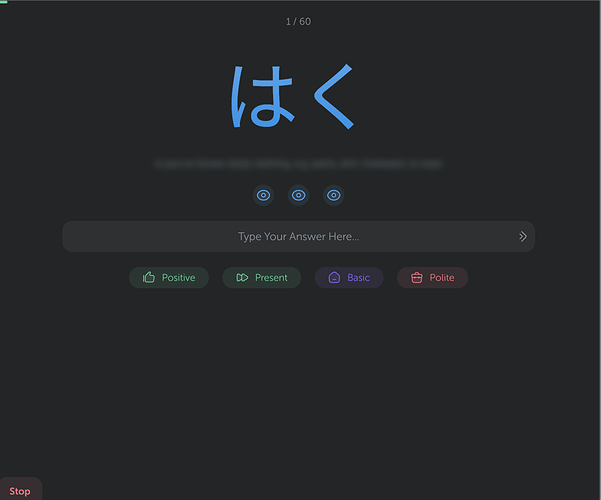 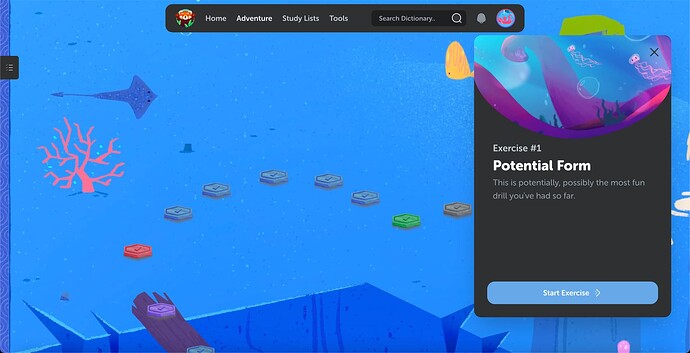 For more information, please take a look at the link below: 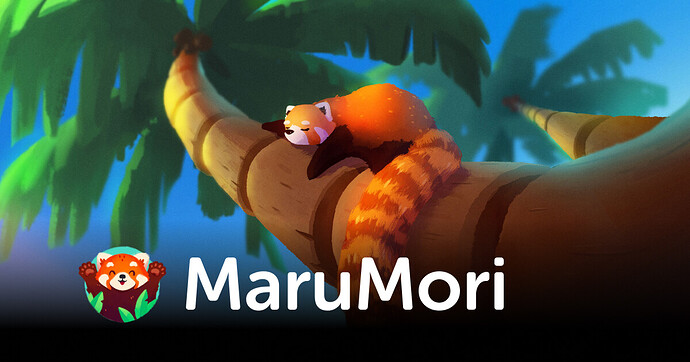 The most fun and complete Japanese language learning platform 🔥 - MaruMori

The most fun and complete Japanese language learning platform 🔥

I’ve really been looking forward to the conjugation drills, so it’s really cool that they’re already here! Small thing: I did the “Adjectives Super Drill” in the beginner region, and when I was done it sent me to the Conjugation Trainer settings page instead of back to the map and didn’t mark the lesson as done

Oh no! I adjusted that drill a little bit right before deployment, and I think that might’ve caused it to not get marked as done. Will put out a hotfix right away.

Edit: Hmm, I think it’s all set up correctly actually! Did you perhaps already do an adjectives drill from the tools page once before with the same forms? I can see the exercise is marked as done for you in the database, and in the API logs it seems it did not mark it as done a second time because you already did it (or a drill that contained the same forms).

Not really sure why it did not redirect or visually mark the level as done for you on the client side though! It should always redirect you back if you are coming from a level in a region

The good news is that if you do a browser refresh (F5), the level should be marked as done for you!

Edit 2: See my new reply, the issue has just been hotfixed

Can you pick the source conjugation?

I was doing the drill for Past Conjugation for Adjectives, and it told me かっこよかったです was wrong and it should be かっこいかったです, but in the lesson Adjectives: Past Conjugation + Past Negative, it says To conjugate いい, we don’t use いい, but the alternative reading of 良い: よい. Therefore, いい in the past tense becomes よかった. This rule also applies to other verbs ending on 良い, like かっこいい which becomes かっこよかった.

I was not super clear about what I mean, I was typing on the go.

I was trying to say that while WaniKani so far is å great tool to learn Kanji I was asking if MaruMori could become a supplement for the rest of the topics in Japanese study - composing sentences, grammar, more reading sources, etc.

Ah, that’s been an oversight on my part for sure. I’ll get it fixed ASAP. Thanks for letting me know!

Fun fact, we do actually have those separate rules in the code for いい but they are not activated yet