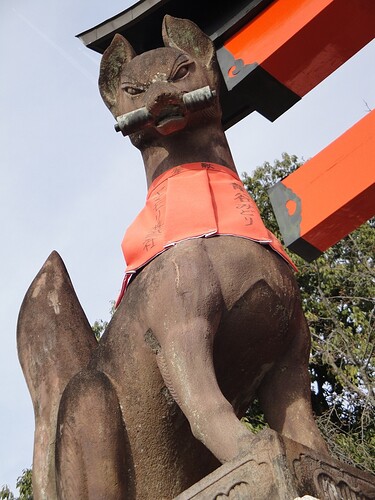 I’m really sorry if this is in the wrong place and is a bit random, please let me know if I need to delete and move elsewhere! I’ve been drawing this Kitsune statue I took a photo of in pen and ink and it’s brought two questions to mind! First, could anyone help me identify the Kanji on his ‘bib’, specifically the ones near the neck/top of the bib? I only got this one shot but I’m interested to see if anyone can figure it out?

Secondly, does anyone know much about these statues? I’ve always wondered what they have the bibs for and what is written on them but unfortunately I haven’t managed to find any answers/my Japanese isn’t good enough to read them.

I took this photo when I went to the Fushimi Inari shrine about three years ago, what a beautiful place!

I think it’s an offering/donation made by a company or person.

奉献 (the two characters around the neck, meaning ‘the act of offering’)
龍谷みどり (possibly someone’s name)
ヤマモリ株式会社 (a corporation’s name)

Ohh you’re a star, thank you so much!

@Shoshinsha-Shinobi might be able to tell you more about these statues?

The bibs (よだれかけ) are a common offering, as red is considered an auspicious color that (among other things) wards off disease and evil spirits. You’ll very often see such bibs on Jizō statues too, for example.

As for the statues themselves: the pairs you usually find at temple gates and shrine entrances (virtue kings or lion-dogs) have one with an open and one with a closed mouth, together representing the sound A-UN (the beginning and end of everything, like ‘alpha & omega’). However, Inari’s foxes are mostly depicted with other symbols, such as a scroll of wisdom, a granary key, or a wish-granting jewel.

Thank you so much for this, I saw so many all over Japan and always wanted to know what they were! They’re such lovely things, I just had to stop and photograph every single one… whoops!