Does anyone here have a PS Store JP account? I recently bought a PS5 and made a japanese account to buy games from there. I managed to get funds into my wallet using gift cards, but I can’t buy games rated CERO Z(18+) because they specifically ask for a credit card in that case (I guess to confirm your age), which I cannot use because of the region difference.

Does anyone know if there’s a way to bypass that or am I f’ed? I really wanted to play Tsukihime and The Last Of Us

You are correct that the credit card is used to confirm the age for Z-rated games, but unfortunately I don’t know any workaround besides actually using a Japanese credit card. I bought one Z-rated game before, and had my friend in Japan log into my account and use her credit card (and then I paid her back).

Well, that sucks. Thanks for the confirmation!

At least there’s only a couple of games rated Z so it’s not that big of a problem. I figure I can just buy The Last of Us physical, since it’s available where I live. With Tsukihime I’m pretty much screwed tho. Why is it even Z in the first place? lol

I recently saw this one and many other Square Enix remasters for mobile. Some of them are not terribly expensive so I can second giving them a try

. Up to Final Fantasy VIII is available + the 聖剣伝説 series + a couple of other games, including Chrono Trigger.

Quick question… has anyone played the Japanese version of Death Stranding? I’m curious if it has the ability to show English HUD labels, menus etc, English voices in cutscenes and Japanese subtitles in cutscenes.

I think if it doesn’t have the corresponding Text and Voice options in the menu, it’s mostly monolingual - either all Japanese or all English.

The only thing I found was this: Death Stranding possible PC release and language selection options

Myself I’m kind of curious why so many mobile games have those “global” releases where you can pick several languages including traditional AND simplified Chinese, but you can’t pick Japanese even though the original Japanese voice packs are there.

I just started playing Panilla Saga today and I’m just listening to the Japanese audio for the story, but the English lines match the audio so badly that I’d rather see the text in Japanese as well

This is definitely an exhausting textbox: 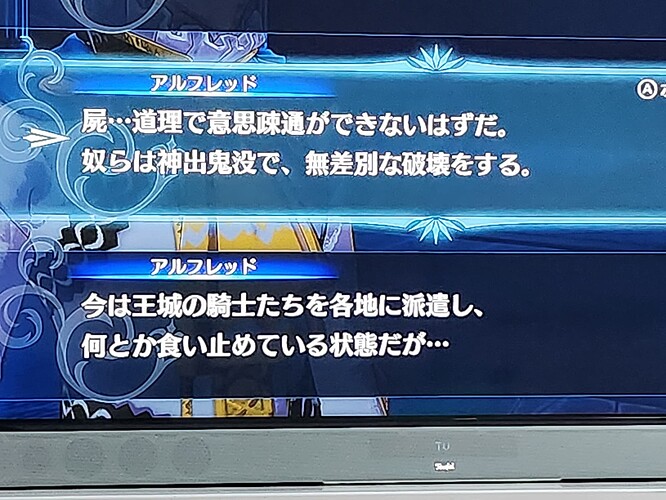 Overall though: Fire Emblem Engage is a good pick, because of the log and the fully voiced lines.