Is it a good idea to buy manga raws to learn japanese along with grammar books and WaniKani?

I would like to start a collection of them but I feel its going to be a long while until I understand anything. Would it be better to practice elsewhere? What is a good starting point for someone at my low level, and what level would reading something such as Bleach be possible?

Yes, starting with manga is a great idea. Wonderful supplement. However, starting with Bleach is probably not a good idea, as it will use a lot of strange fantasy vocabulary (which WK will not teach). I believe in Seireitei they even use archaic Japanese (closer to what they spoke in the feudal era?). This seems to be true in the anime, so I’d expect the same of the manga upon which it is based. So there may be this other kind of Japanese being used - as well as other (higher) levels of politeness while in Seireitei.

Something like Yotsubato or Non Non Biyori is going to be a better starting manga.

I’m sure other, more advanced people, will have even better recommendations for you.

What I did was have a few manga in mind that I eventually wanted to give a go, and then periodically read a few pages on amazon (or other sites that have a lookinside / 立ち読み feature) to see if they started making sense to me.

Unsurprisingly, yotsubato was the first one I was able to read at least somewhat

When I started reading, it was just manga that I was already reading in English, but the translation was far behind the raws. Dunno about going for simpler manga first, what worked to motivate me to not give up because the text is too hard was that I was already invested in the story and really wanted to read it. Might not be for everyone though.

Probably time for me to make the jump.

I personally bought the whole Japanese Death Note box and began to read around your level.
I did not, and still do not understand much but after looking up multiple grammar points and vocabulary I am making slow progress. I really adore the series and it makes working out the sentences much more fun. It’s more of a study method at the moment rather than “fun light reading”.

I am however aware of the fact that the death gods speak very impolite japanese while using a lot of archaic vocabulary so you just have to be on your guard and know what you are reading sort of.

Do whatever is fun and gets you going!

EDIT: Just an example of what I learned from the first page of reading death note

Where did you get them from? I have the box set in english and like you, I also adore the series. It would be pretty cool to also have the Japanese version. If it’s a good price, I’ll go for it. 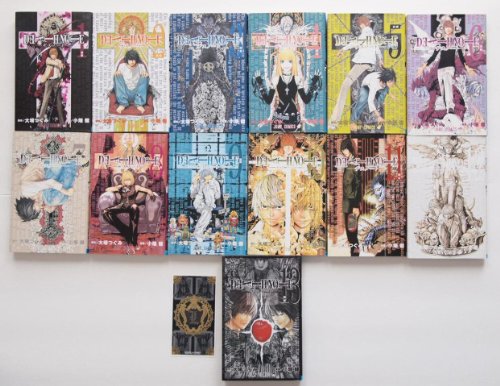 Try here for a small list of light novels/novels based on difficulty. At level 11 I got the three easiest off the list as e-books. (There are a few guides you can find on Google about how to set up a Japanese Amazon account and order Kindle books. You will need a credit/debit card, though.)

I’m currently working on the easiest one, The Girl Who Leapt Through Time. There’s an animated movie based on the story, so if you watch that first it might aid your understanding some. You don’t need a Kindle to read them. There are apps for phones and computers. The Kindle app for computer is amazingly helpful. You can change font size/family, highlight things, install a Japanese-English dictionary, make notes, and there’s even a flashcard system built in (though no SRS). It’s pretty slow going but there’s a lot of “woohoo I just read a whole page in Japanese!” going on.

If you need something easier, you can check out this Tofugu article, which discusses a lot of free resources too.

Phew, yeah, I think I paid somewhere between $60-80 for my english ones. I got lucky with that though, that was a really good deal. $165 is probably about right, honestly, but I’ll look around and see if I can’t find anything cheaper. Thanks for the link.

The thing I started reading with a little bit ago was NHK-easy News. It might not be as cool as reading your favourite Manga, but it’s written in a way that you can easily understand it (even if you need to check some vocab, but that gets better with time) and you might learn words that are actually helpful and used. I don’t know about Manga, but to me that sounds quite difficult.

I read that edition of 時をかける少女 (in fact it was the first light novel I finished) and I enjoyed it a lot - it’s an excellent entry-point to start tackling light novels. It certainly doesn’t hurt that the story is actually interesting, even for an adult. Do note, however, that the anime does not follow the same story! In fact, it doesn’t even feature the same main character, although they are using similar themes.

Kadokawa Tsubasa Bunko has put out a ton of books in this particular line-up, by the way, and they’re all aimed towards younger readers (so they have furigana, sometimes more pictures, stuff like that). I read another one from the same publisher after 時をかける少女, called ももへの手紙 (this one does follow the anime with the same name I believe), and while it was a bit harder, it was still doable, and I liked the latter half of it a lot (it admittedly has a very slow start). Watch out for the Hiroshima-ben barrage, though.

If this sounds interesting, you can look through a ton of similar books here: http://www.ebookjapan.jp/ebj/magazine/31771/

Wow, I wasn’t planning on spewing out quite so many words regarding something that wasn’t really even completely on-topic! On a related note though, let me give everyone a bit of advice: try, try to understand stuff without looking it up first. Don’t instinctively reach for the dictionary/grammar guide/google the first thing you do. It’s ok if you do that later if you can’t figure it out, of course, but you’ll find that you can actually make sense of a lot if you give it a bit of thought.

Ah, thank you for that clarification! It’s been a long time since I watched the movie so I thought it was more related than that. Do you think I’d get anything out of rewatching it while going on with the book, or is it too different to help out?

Also, you are absolutely right, trying to understand in-context is important. It’s surprising how often you can figure stuff out. Even if it’s a weird reading, you can often guess the meaning. (if you didn’t know 今日 but knew 今 and 日 you wouldn’t guess きょう is the reading, but you could guess that ‘now day’ is ‘today.’)

I haven’t actually seen the anime, it was when I was talking with a friend (who had seen the film and loved it) about the book that we realized that completely different things were happening. So I looked up the synopsis on MAL and apparently the anime stars the niece of the character in the book, and it also seems to convey a different message. But again, I haven’t seen it myself, so I couldn’t tell you for sure.

The manga, however, does seem to be based on the book (looking at the names and synposis on MAL, again).