the winner was…さすが、君の名は！As excepted of such a popular story! :0

You got me there for a sec

I was about to go

On the Discord now! Anyone who’s around, feel free to pop in

EDIT: Thanks to all those who showed up! It was fun.

We had difficulties on Discord and switched to Google Hangouts, but that gave us some problems too. Maybe Skype or something next time?

I like Skype better because it doesn’t require installing browser plugins.

My time zone is JST (UTC+9) and I’m usually free on Saturday mornings and afternoons (although probably not this Saturday) and Sunday evenings after 18:00. Also, I’m free fairly often on weekdays after 18:00 as well, but I assume weekdays aren’t great for most people.

Waugh, I spent all week looking forward to it and then it completely escaped my mind when the day came. OK, next time I’ll put it into my calendar…

I mentioned that I am reading パン屋再襲撃 by 村上, and promised to share a screen shot of a page, so others can see what the complexity is. I’m finding it not more difficult than ５分後に意外な結末。

Here’s page one, from the kindle book I purchased from amazon.co.jp. Link here. With kindle, you can use the kindle dictionaries (J-J and J-E), or you can choose “google…” and the selected text will open in a browser tab, from where you can modify it and look things up in, eg http://jisho.org.

Thanks for sharing this. I will definitely check this out!

Aw shucks! I actually do own 君の名は！

Hey folks! Just a heads up that I’m still in the club and will be participating in discussion as soon as I can. As previously mentioned in the thread I’m currently in the process of moving, and will be busy through next week. If I find some time, I’ll probably skip ahead to the current focus story so I can participate in discussion. Either way, I hope I can be back in the swing of things soon

Okay that’s cool. I’ve been meaning to ask how the discord meeting went last time. It seems you guys moved to google hangouts? And what did you do/talk about during the meet up?

Yeah, the voice connection on Discord was very poor so we decided to try something else. I made a Google hangout since that had been mentioned before, but that apparently requires you to install a script in order to make calls. The script download gave me a lot of trouble and wasn’t really worth the hassle; perhaps Skype would be a better option next time if Discord continues to act up.

As for the call itself, we took turns re-reading the 3 stories for the week and checking vocabulary/grammar points as we went. I managed to pick up on some new things during this read-through; mostly vocabulary words that hadn’t registered my first time through. So yeah! I think it was a success overall.

Hey everybody. I was just looking through the next book to see how we’ll break it up for reading and noticed an issue. “The Devil’s a Part-timer” is divided into 3 distinct sections. I can think of two options we can pursue in order to tackle this issue, however.

I know it’s a bit premature to fuss about this so early (we’re still about 6 weeks away from starting this book), but I just noticed this so I didn’t want to forget about mentioning this and then we have to scramble at the last minute to put together a schedule that works for us. Whenever you get a chance share your thoughts on this.

I feel like 2 is the best option.
Considering the participation for the current book, I feel that self-organization like “X weeks to finish the part” means no post for X-1 weeks, then a bunch of messages going like “sorry, guys, I had no time to read” or “well, I finished reading it, it was okay”.
At least, option 2 means that there is some regular activity, and people who are too busy can just lurk, but hopefully will get motivated to follow along anyway.

I’ve been reading through it a bit and find the vocabulary to be a bit more difficult than the current book so I think option two would be better. Give everyone an incentive to read more frequently and help people unpack some of the denser passages, rather than letting people self regulate, which will lead to not finishing.

Sorry for jumping into your book club topic, but I wanted to get some opinions.

A book (series) I think could be interesting just by the premise is called 空ろの箱と零のマリア (The Empty Box and Zeroth Maria). I think it’s still beyond my level right now, but I was curious if anyone here thinks it would be doable for the intermediate book club or if it would be too hard. Thanks.

Summary from the English version on Amazon:

Kazuki Hoshino treasures nothing more than his ordinary life, and March 2 should have been an ordinary day. The arrival of a transfer student, the mysterious Aya Otonashi, shouldn’t have shattered the world he knows. He’s never seen this girl before in his life, but she says she’s met him thousands of times–and declares war on him for a crime he can’t even remember… As the truth begins to unravel, nothing is as it seems, and at the heart of it all is a wish powerful enough to change everything… 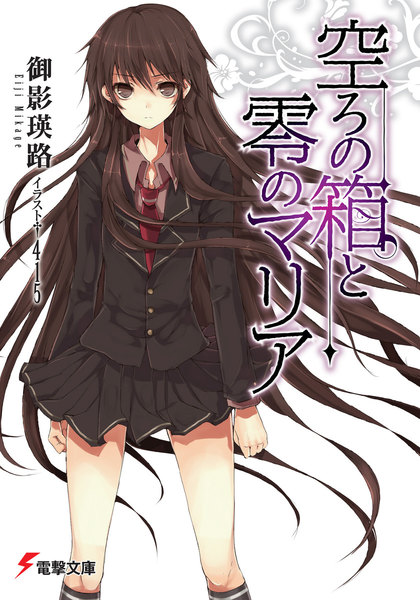 @seanblue
I have no idea actually. I feel like I’m willing to tackle a book of any difficulty. (not because I think i’m really good or anything but because I want to challenge myself to get used to reading difficult things while I have the help of the club. ) it seems mostly the beginner book club makes sure to have really easy books, while we just try to read whatever sounds the most enjoyable without being impossibly hard. In any case to me at least, your book sounds enjoyable to read and not impossibly hard so I’ll add it to the roster for the next poll.

Oh yeah guys, @Raionus is developinga tool that analyzes the text of a book and produces a vocabulary list for it that syncs with wanikani and keeps track of you learned works from coredecks and other books on his site. So it shows you a list of words that are unknown and if you really don’t know it you can srs it and known words can be trashed and you’ll never see them in another list again. So it sounds pretty cool for vocab building and could help us read our books faster and eventually become a lot more literate and proficient at reading novels. But he(or she but I think he’s he), wants to link the discussion threads on his site so they have to be put in a public section as right now they’re in campfire which is private. Are you guys okay with this?

Not even sure if you can move private threads to a public section but I’ll try it if you guys are okay.

The general idea is that I’ll put the books on my website and anyone can access the vocabulary list. In exchange, I’d be linking the discussion threads so that anyone reading in the future can read them. If they have problems, say, with a sentence or something they could go through the old thread and see if anyone provided an answer to the questions they had.

it seems mostly the beginner book club makes sure to have really easy books, while we just try to read whatever sounds the most enjoyable without being impossibly hard

Many people probably voted for Kiki’s Delivery Service because they’d heard of or seen the movie and didn’t put much thought into the difficulty.

In any case to me at least, your book sounds enjoyable to read and not impossibly hard so I’ll add it to the roster for the next poll.

I won’t vote in the poll because I don’t want to influence the outcome if I’m not sure I could keep up. But if it happens to win I’ll at least buy the book (and probably the English version too) and try my best to follow along.

Many people probably voted for Kiki’s Delivery Service because they’d heard of or seen the movie and didn’t put much thought into the difficulty.

Oh I know it isn’t easy, I think they thought it was easy because it was studio ghibli, but it seems anime like books are actually more difficult because it’s father from the formal Japanese taught in text books. It’s kind of hard to decipher the difficulty of a book because it depends on vocabulary, N level, and what you’re used to seeing. But for the most part I think the beginner book club’s goal is to find easy books. I never really thought that would work out much because once you leave graded readers books aren’t really made to be easy (unless it’s a children’s book, which are Japanese child easy not language learner easy) so you might as well Just pick a book you want to read and work through it. But hopefully, they find a book that fits their grammar and vocab level.