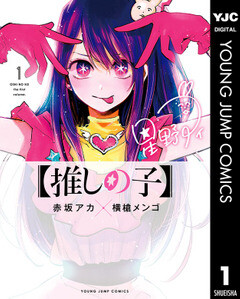 This book is very hard to talk about, because it takes a very long time to set up the premise and subverts expectations multiple times. That is part of the fun of reading this manga so I want to keep it vague. I would suggest not looking at the wikipedia summary since it spoils part of the setup.

Onto the work itself. It is a rather dark and more realistic look at the entertainment industry in Japan and some of its shortfalls. I have to be honest it took me 2 tries and a very insistent friend for me to really get into it, but once I was hooked there was no letting go and it is probably my favorite currently serializing manga. The story is by the author of Kaguyasama and the art by the author of Scum’s wish and has practically exploded onto the scene.

@NicoleRauch As to not monopolize the nominations I think it is probably a good idea to remove my Just Because! nominations. Judging from the last poll results the chances of that book being selected are slim at best anyways

As to not monopolize the nominations I think it is probably a good idea to remove my Just Because! nominations. Judging from the last poll results the chances of that book being selected are slim at best anyways

Oh, don’t worry about monopolizing - we still have a lot of space in the proposals list. I mean, ultimately it’s of course up to you, and looking at the past two polls, it doesn’t sound like the most popular book, but you can never know

Either it gets kicked out in the next poll anyways, or it comes back to life, who knows - I’ve seen books being picked that were on the verge of being kicked out, so nothing’s impossible.
So please decide for yourself, but don’t feel pressured because you nominated a second book.
(I think my proposal record was 5 books at the same time or something

Good to know i might have to find some more grown up manga then. I read about 220 manga while i was in japan which is why i thought most had furigana.
But none of them are super sophisticated :P. I mainly read shonen manga that have furigana and even most nsfw/adult series i read had furigana which surprised me. In my defense i was 17/18 years old at the time so i had a typical teenager taste.

Please feel free to nominate your favorite books or manga to the club! Please make sure to check out the Proposal Guidelines

If you ever want specific recommendations, feel free to ping me in the [2022] 多読/extensive reading challenge topic.

Do you think you could tell me the name of the library ? I am going to Paris next week so i would gladly grab the book there as well

The store i went to is called Junkudo.
There is also two Book Offs that have a japanese section, though they sell mainly french books now. There used to be a big japanese only book off and it was amazing but sadly it’s gone T.T
‘Book off’ is a Japanese used book store chain so it is pretty cheap, you’ll probably not find the book club books there but it’s a cool place to check out if you want to maybe buy other Japanese books/manga or just to browse.

There is also two Book Offs that have a japanese section

I can see three Book Offs in Paris (Quatre-Septembre, Châtelet and Bastille). Are you saying that only two of them sell Japanese books? Would you know which of them?

Would be weird if it didn’t, given its location, I think

Thanks very much for the info! I’ll be in Paris next month, so I’ll make sure to go there

I mostly went to the that one because that’s were the big Japanese book off used to be and because it’s close to rue Saint-Anne which is full off Japanese restaurants, being surrounded by Japanese store signs is so cool, it’s like i can suddendly speak the language (because my French is reall bad:( ). And it’s also within easy walking distance off Junkudo.

If you want more to read, the manga Orange have just become a book club. We’re voting on when to start and all the good things currently. Please join if interested:

Welcome to the Orange

Book Club! Orange is 7*-volume manga series about a high school student that gets a letter from her future self. 高校二年生の菜穂に届いた未来からの手紙。そこには未来の自分の後悔がつづられていた。 はたして菜穂は手紙を読み「後悔しない未来」を作ることができるのか？切ない思いが交錯するタイムパラドックスラブストーリー。(From Amazon)

@NicoleRauch I updated the main post (I hope I did not mess up your formatting), but the title still needs to be changed!

If you think you are ready to read a bit faster than this club’s usual speed, maybe it might be worthwhile to peek into the Advanced Book Club? Incidentally, the club is voting for their next pick right now

maybe it might be worthwhile to peek into the Advanced Book Club?

How advanced is the Advanced Book Club? Would a level 1

How advanced is the Advanced Book Club?

That depends on the pick, I’d say. We sometimes read hard books (old literary stuff) at ~15 pages per week, or modern books at 30-50 pages per week. Next up is Spice & Wolf, a pretty popular light novel, and we read it at 30-35 pages per week, so that might be a good starting point for you? If you’re interested in the book, that is.

? How many horsepower per JLPT? xp

Next up is Spice & Wolf, a pretty popular light novel, and we read it at 30-35 pages per week, so that might be a good starting point for you? If you’re interested in the book, that is.

Not so much interested in Spice & Wolf and that’s definitely a speed I would need to ramp up to. As in, 30-35 pages per week is not a lot, but my reading speed is not there yet, I feel.

? How many horsepower per JLPT? xp

2/3 JLPT level per level per horse. You can do the rest of the math

that’s definitely a speed I would need to ramp up to.

Then you’re probably better off with the Intermediate Club for the time being, as that’s sort of the lower end of the speed range (we’re currently reading Murakami’s Kafka at about 45 pages per week). But of course you’re welcome to keep an eye on our picks and to try them out whenever you feel like!

There’s a brand new Mystery Novel Book Club over at the Natively Forums, and it’s now voting for its first pick! If the WK book clubs are not enough reading for you, or you’re looking for something specifically in the mystery genre, why not come take a look?

Hi! I thought it might be fun to try to start a book club. I’m taking inspiration from the book clubs on WaniKani’s forums but tweaking the format just it a bit. We can always iterate and improve 🙂 I personally am a big fan of mystery and crime...

I hope it’s okay to post a link to a non-WK book club here. If not, let me know and I’ll delete it.