Imported Books Through Mandarake.co.jp: My Experience (Still cheap and fast during COVID!)

Hello everyone! I ordered some manga over mandarake and wanted to share my experience.
First of all: Thank you for giving me the idea to do that! After I found this thread I immediately began to check out the beginner recommendations in the forum.

Ordering has been very easy thanks to the English option on the website. Due to covid I had to use the rather expensive Express Airmail shipping. Even with that I still payed less per volume compared to what they would cost in Germany, which is where I live. I’d prefer to order via less expensive shipping in the future even if tracking is not provided, so I guess I’ll try that out when it’s available again - it was very exciting to monitor the packages “journey” on the website of Japanpost though.

I ordered the manga on Feb 10th and they arrived today so it took ~11 days to arrive.
I did not have to pay for income tax or customs (or rather I ordered explicitly an amount with was low enough to not get a fee.)
The overall quality of the manga is very good - some have discoloring but that doesn’t bother me.

I have to be honest: I’m not at the level where I can understand much but owning them gives me a goal to work towards to and I’m very excited to take on the challenge. 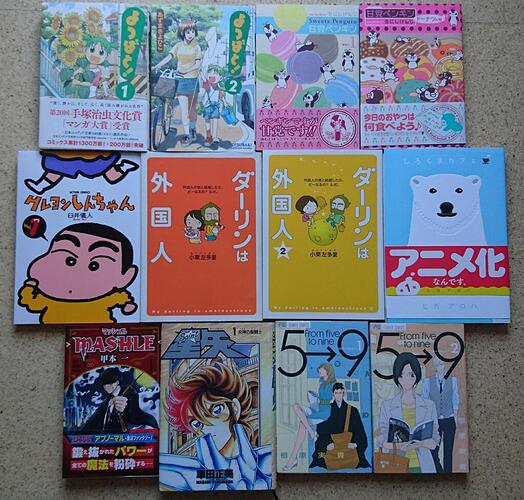 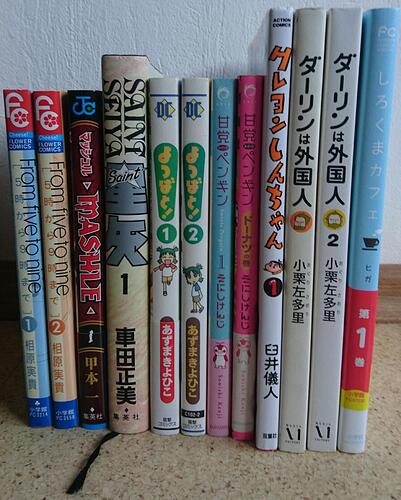 What I got for “studying”:

よつばと! vol. 1&2 (Yotsubato!)
One of the most recommended manga for beginners. Since I own them in German I can compare them.
しろくまカフェ vol. 1 (Shirokuma Cafe)
I think this gets recommended just as much. I have seen a couple anime episodes and so I’m looking forward to this.
クレヨンしんちゃん vol. 1 (Crayon Shin-Chan)
This one is for nostalgia reasons. I’ve seen the show as a kid and I think due to the setting it will be fairly accessible.
甘党ペンギン (あまとうペンギン) vol. 1 (Amatou Penguin) and 甘党ペンギン ドーナツの巻 (Amatou Penguin Doughnut)
A manga about a penguin tasting sweets. It looks adorable and I just hope it is beginner friendly, I got it on a whim. It has furigana on everything so hopefully I’ll be fine.
ダーリンは外国人 (ダーリンはがいこくじん) vol. 1&2 (My Darling is a Foreigner)
I got this mostly because there’s also a movie that I can compare and use for listening practice - but the manga itself looks a little more advanced. It’s a little weird because the first volume I got has no furigana, but the second has furigana on everything. I think this is the one I have to work towards to the most.

What I got for “pleasure”:

聖闘士星矢 (セイントセイヤ） Deluxe vol. 1 (Saint Seiya)
Since there is no German serialisation I had to buy it. It is an older shonen jump manga about mythological fighting knights that I absolutely adore. It might not be as exciting as some modern series but I know the story well, so that should make it a little easier for me.
マッシュル vol. 1 (Mashle)
As a complete contrast to the older Saint Seiya I got a modern shonen jump manga too. I am looking forward to this, though it might be a little more advanced due to it being more centred around magic and comedy.
5時から9時まで (ごじからくじまで) vol. 1&2 (5-ji kara 9-ji made)
My absolute guilty pleasure manga lol. Another one that I own in German (though I’ve been waiting for the last volume to release, it’s been out in Japan since what feels like forever). There is no English serialisation. It’s honestly very trashy but for me it’s on a level where it’s so bad that it’s absolutely hilarious. It is a little more advanced but since it’s a drama it should mostly use “everyday” vocab. I’m really looking forward to this since it also has furigana.

I tried reading a little and it’s amazing that I technically can thanks to the furigana (and I even know some words and phrases) but my understanding in general is severely limited. I’m really looking forward to work on that though!

so this is basically the costco of manga?

Had a very positive experience with Mandarake.

I wrote the details on another thread:

I just ordered a bunch of manga from Mandarake (…like 22 volumes haha). I’m in the UK and I see there’s been quite a bit of discussion of additional customs fees being requested however I didn’t have to pay any so not sure if that’s changed or if I just got lucky! My order came out at 11490 yen (including shipping which was 4240yen) for 22 vols of manga…which is so cheap. As other have reported, the manga all arrived well packaged and look as new tbh. Some pics below - 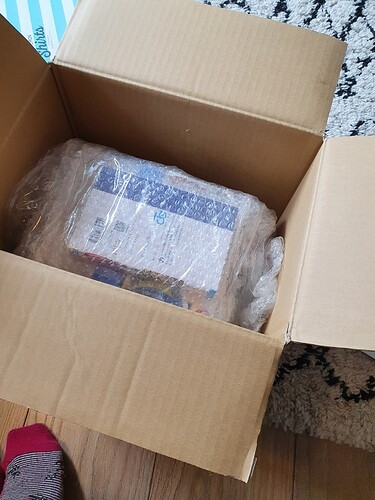 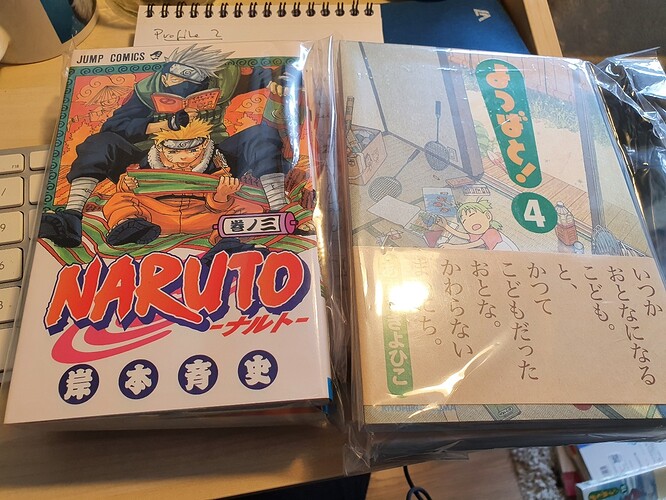 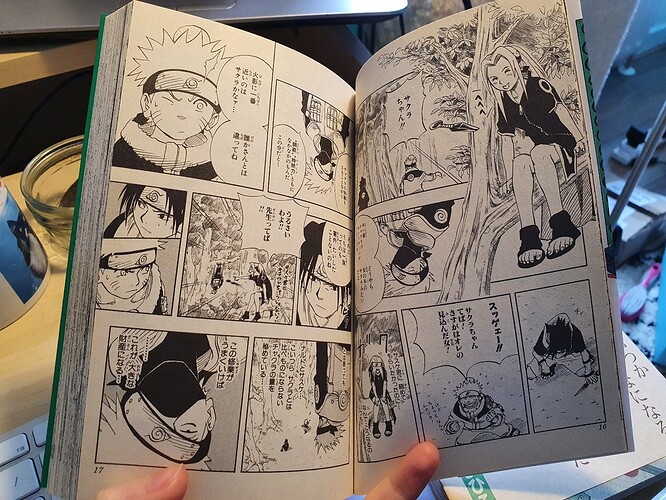 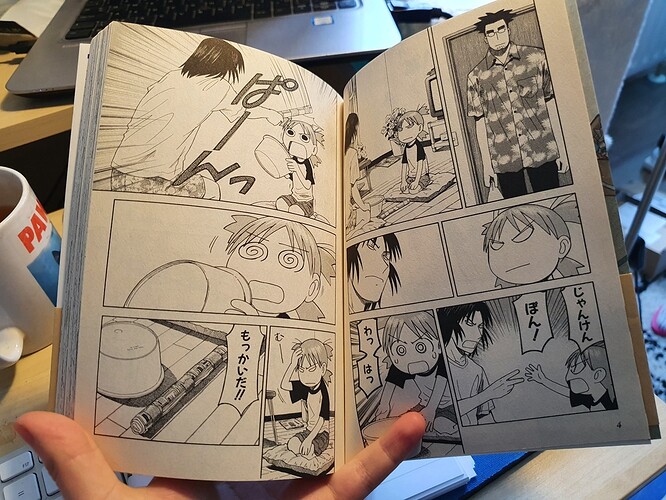 クレヨンしんちゃん vol. 1 (Crayon Shin-Chan)
This one is for nostalgia reasons. I’ve seen the show as a kid and I think due to the setting it will be fairly accessible.

Let’s read Crayon Shin Chan together! When there is enough interest to read volume 2, this book club will be re-activated. Feel free to reply to this thread if you’re keen to read volume 2

[image] For those who are unfamiliar with Shin Chan, he is a mischievous and rambunctious 5 year old boy that drives the adults around him crazy. The comedy in this manga/anime centers round his inappropriate behaviour, such as using wrong words or phrases or flirting with hot babes. There …

This seems pretty interesting. I’m not typically a manga kind of person tbh, though I’ve been considering it with where I’m at on reading level now.
Anyone got recommendations for someone looking for something more mature (mentally)? I’m really into things like gundam where it blends good action with political drama, but don’t want something that already has an anime adaptation.
Thanks!

They seem quite new to me, out of curiosity what was their condition marked as? 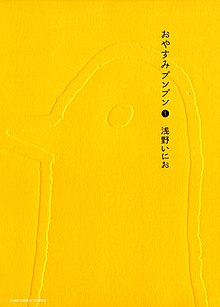 Goodnight Punpun (Japanese: おやすみプンプン, Hepburn: Oyasumi Punpun) is a Japanese manga series written and illustrated by Inio Asano. It was serialized in Shogakukan's Weekly Young Sunday between 2007 and 2008 and later in Weekly Big Comic Spirits from 2008 to 2013, its chapters were collected in thirteen tankōbon volumes. In North America, it was licensed for English release by Viz Media. A coming-of-age drama story, it follows the life of a child named Onodera Punpun, from his elementary school y...

Although keep in mind it’s known as a pretty depressing manga.

Also, perhaps you should ask on reading thread? This thread is primarily for sharing Mandarake experiences.

I think some of them were marked as B condition which I think is the worst maybe? (Think it goes S->A->B) The Naruto volumes were only 200yen each. They all look as new though tbh. I’m actually finding Naruto a pretty good read - it’s maybe got slightly more varied vocab and is a bit denser than something like よつばと but the grammar so far seems pretty okay (I’m now about 2/3 of the way through the first volume so it’s possible it will get harder). Having watched the anime definitely helps as things like move names, ranks etc are already familiar.

No, actually D is the worst. The sequence goes like

They all look as new though tbh.

Hopefully it will help your reading skills!

Ah nice, cool! I wonder how cheap the D ones are then, 50yen or something? But yeah, seems like going down to B is pretty safe in terms of the quality you will get at least

I still remember when several years ago during a trip to Japan I was buying a used PS4 game, and the cashier took the disc out of the case, showed its perfectly scratch-less surface to me and asked if this condition is okay

i just ordered 59 volumes of manga from these guys

Could someone confirm for me? If I were to order from a storefront instead of SAHRA warehouse, once the invoice comes though, is payment still done via the website? Or is it somehow handled by the individual store? I’ve been looking to get a few things, but SAHRA doesn’t have them as sets, and seems to be missing a few volumes so I can’t get them individually either.

Edit: nevermind, found it detailed a bit more in their faq. Looks like you get an email link that redirects to their page or something.

Yeah, just make sure you understand that if you order from multiple stores/warehouse they’ll charge shipping from each location separately. They don’t combine ordersvfrom different locations.

I did run into an issue where I couldn’t use PayPal with some art books in my cart, even though they showed up in search when R18 was set to “hide”. I’m reasonably sure there’s nothing risqué in them, so I’m guessing probably mismarked. Now, trying to figure out WHICH item(s) in my cart were flagging it was fun haha.

Glad to see this is still helping people get new reading material to study with. I’ve been tempted to put in a new order recently, even though I’ve still got a massive pile of manga I haven’t read yet…

DHL makes you pay fees according to the laws in your own country right? Not the senders country? Considering buying from here, but I’m cautious about DHL making me pay fees when there aren’t actually any (books being mva-free when imported to Norway).

Also, maybe a dumb question: when I’ve had to misfortune of things being sent with DHL before, they call you and make you meet them somewhere to pick up. Since I work full time now in a place where I can’t carry my phone around, this would be a deal-breaker for me. Can you make DHL send it to the closest post-office?

No import fees on books in Norway when ordering books from abroad. Sometimes stores like Amazon will take a deposit so that they can pay import taxes (if any) faster. But they will just refund you later. Mandarake doesn’t do it, you just pay for your books and the shipping cost.

Can you make DHL send it to the closest post-office?

They will send it to the nearest pick-up point (often a grocery store) if they can’t deliver to you personally. Or you can choose a pick-up point delivery on the dhl website (you’ll get a tracking link in an email).

Thank you for the info!