A friend of mine is visiting Okinawa and went to a restaurant there with friends. When they left, the waitress went outside after them to give them chewing-gums and gave them this note, then stayed outside saying good-bye as they left. 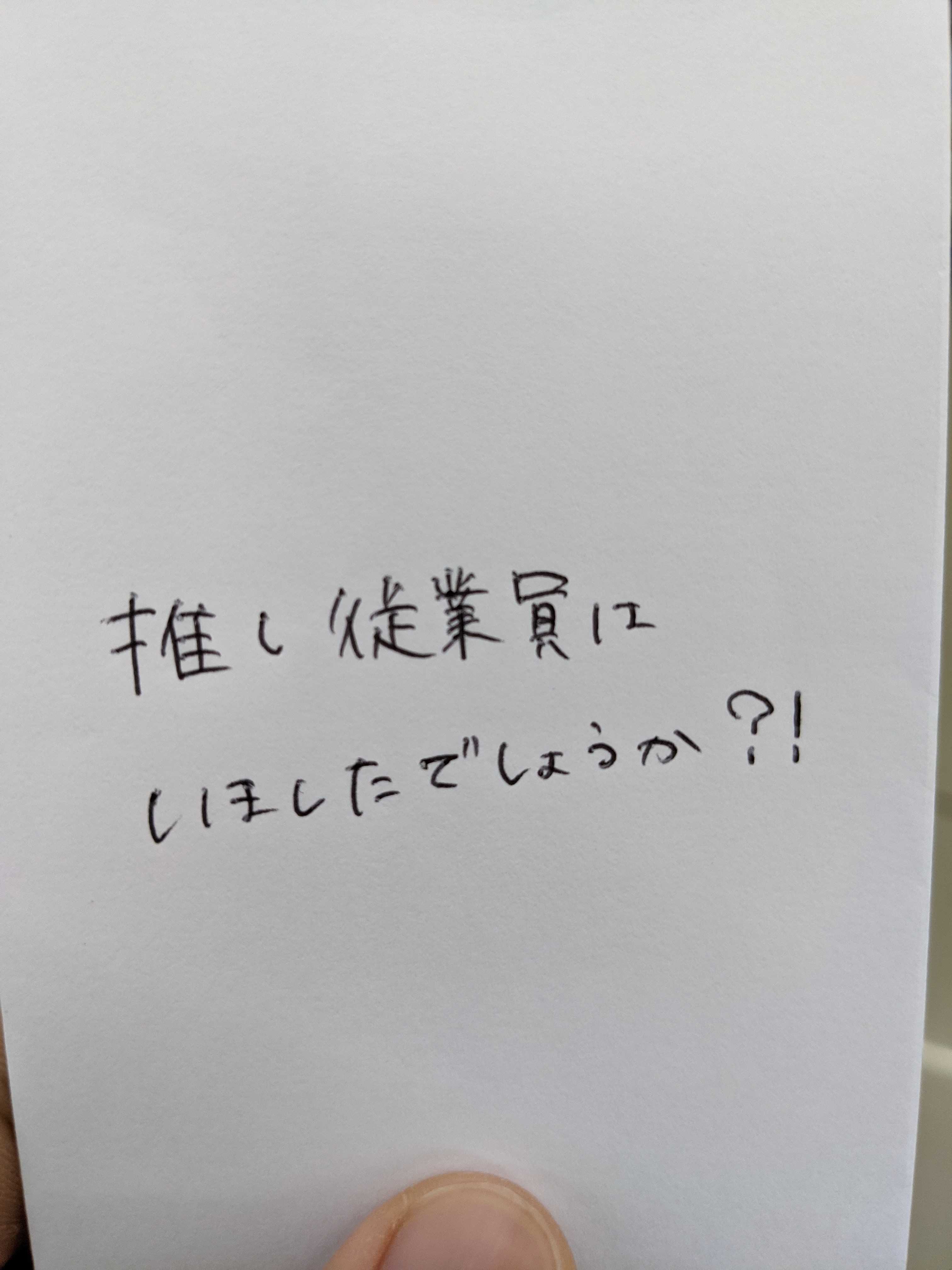 I can’t find a matching kanji for the first one on jisho, and the second part reads like “従業員はいましたでしょうか?!”, but we’re not sure how to interpret it.

We think it may be a pissed off message about the lack of tips, something like “the waitress was here right? She worked her ass off for you so leave a tip”, but it sounds kinda… uncharacteristic.

Any guess on the meaning?

Basically, she is asking if there was a staff member you “root for”.

We think it may be a pissed off message about the lack of tips, something like “the waitress was here right? She worked her ass off for you so leave a tip”, but it sounds kinda… uncharacteristic.

Japan has no tipping culture. This interpretation is extremely unlikely.

@Naphthalene’s interpretation is probably correct. That’s how I’d translate it as well. Not sure what kind of restaurant it was, but if it was somewhere in the lines of a maid/cosplay cafe, it’d make sense.

Not sure what kind of restaurant it was, but if it was somewhere in the lines of a maid/cosplay cafe, it’d make sense.

That was my thought too, since that term is mostly used in idol culture (or, say, 乙女ゲーム), and a regular restaurant would probably not have enough staff for a choice to be made

There’s another thing I’m thinking about, but I’m not sure how likely this would be. Assuming it’s a regular restaurant, I’m thinking maybe the waitress who handed him this had a crush on him and wanted him to pay her a compliment (or something like that).

Either way, the possibility of it being a hostile passive aggressive message is almost zero.

Only on a Japan-related forum can someone type this without someone else wondering what is going on.

I asked a Japanese friend, and he said it could be a popularity contest system among the staff, with the waitress who gets the most votes receiving a bonus. He said he used to work at a place who had such a system.

Thank you very much for a your answers!

Your explanations make sense, it was probably a populariy contest.

Just like any language, sloppy or hurried handwriting complicates things, and the person who wrote that note seems to me to have rather poor penmanship.

This note is written extra neatly, it is hard to find such a readable handwriting actually

Gonna have to disagree with you on that one

Seems about average to me for a, like you say, rushed informal sticky-note kind of thing. That person can probably do a lot better when they’re trying to write something more important.

This note is written extra neatly, it is hard to find such a readable handwriting actually

Haven’t seen too much handwriting but this one was very clear. Quite often handwriting in manga is far worse…

Well, in the writer’s defense, most people nowadays (in my opinion) have pretty awful handwriting which drives down the average. This is especially true nowadays when the vast majority of the writing that people do is digital and actual writing with pen and paper becomes more and more rare.

It’s not so much of an issue when you’re reading a language that you’re skilled at, but it’s much more difficult otherwise. Ask a Japanese person who is just learning English to read someone’s cursive scrawl and I imagine they would be hopeless at it.

Hell, I sometimes can’t read my own, a few days later. But it gets the job done fast for a thing I only need to remember temporarily. To agree with you, I can (but don’t often) hand-write so other people can easily read it, and it takes way more concentration than it should to make it not only readable, but nice.

I am completely fine with your opinion, but usually I can’t read handwritten Japanese at all and this one is really clear and organized