I realize there have been several haiku threads in the past, but I wanted to create my own to have a place to post somewhat regularly (I might try to shoot for one haiku per week) and also exchange interpretations and ideas with others. I have never really looked into English haikus, so translation into English is probably beyond me, but I welcome any and all attempts to translate! If you have any questions or haiku of your own, feel free to share.

Here is my haiku for this week:
恋心しづかなりけり冬ざるる

This is way beyond my ability to read, even with a dictionary

. DeepL did give an answer, but I’m not going to spoil it by cheating.

Just out of curiosity, do you know if this is written in 古典語 (classical Japanese) or am I just going too far beyond my level?

DeepL often struggles with haiku, but it can probably get the gist of it. I did write it in 古典語, mostly because I don’t have a strong enough vocabulary or poetic sense so I usually imitate various haiku that I’ve read in the past.

Oh you’re writing these yourself? Amazing!

I remember quiet
Feelings of love, solitude
In empty winter

When love is still young, winter will fall

Based on what you said, I don’t think it can handle 古典語 / 詩歌

. Or maybe its right and I’m wrong

Oh you’re writing these yourself?

Technically yes, but I wouldn’t say I’m doing it in an authentic way. I mostly look up a 季語 that I want to build the haiku around, and then try to incorporate a 切れ字 (although not always necessary). In this case, while searching more about けり, I stumbled across the phrase しづかなりけり and I thought it matched my chosen 季語 quite well.

I remember quiet
Feelings of love, solitude
In empty winter

I quite like this interpretation, especially the end. I think In empty winter captures the feel of ふゆざるる. The first part is a more positive spin on the haiku than I intended, but definitely valid.
I’m not confident in my English haiku skills but this is what I imagined the meaning would be:

When love is still young, winter will fall

I’m not sure where DeepL gets this translation, but I’d love to know its thought process

Well I don’t know much about 俳句 or 切れ字, and I was trying to translate solely using Yomichan which is why I couldn’t make heads or tails of it at first. I kind of get how to parse these a little better already, though. Clearly its more effective to do a deeper search for 季語・切れ字 rather than Jisho/Yomichan.
Speaking of which, I found the definition of 冬ざるる in this blog post (?) [冬ざるる](『冬ざれ・冬ざるる[俳句]』.

Ah, I’m not familiar with Yomichan, but some 季語 aren’t in normal dictionaries. Even the more common form ふゆざれ isn’t in Jisho (but can be found in Japanese dictionaries like Weblio and Kotobank). I happened across ふゆざるる on this nice 季語 website while looking up ふゆざれ. The site shows a lot of examples of ふゆざれや, but I already wanted to use the 切れ字 けり so I went with the more convenient 5文字 word

Here is my haiku for this week:

I contemplated whether to use 独り instead of 一人, but I remembered some advice from a show called プレバト where the haiku expert corrected one of the contestants’ haiku and said that 一人 was better because the other would take the focus away from the 季語. I think that applies for this haiku as well, but who knows ¯_(ツ)_/¯

I forgot to edit my answer for last week. Combining the past replies, it would be something like:

Even love has gone
Desolation and silence
In empty Winter

As for the new one:

1. A sunny spring haze
Wind shifts, is there a
Single traveler?

Very well done again @dorod ! I may be interpreting this wrong still, but it seems there are multiple meanings? I must admit I was very amused by the various readings.

The reason for the difference in the second line is the different meanings of 風化 ｛する｝. My first haiku is if you read it as かぜかする, or “the wind is transformed”. Admittedly this sounds a bit stiff but it still fits the syllable limit.
The second one is if you read it as ふうかした, which can be “weathering” according to Yomichan and 「地表の岩石が、日射・空気・水・生物などの作用で、しだいに破壊されること。また、その作用。」according to goo.ne.jp/word/風化.
The third interpretation is again ふうかした, but this time meaning “fading (of memories)” according ot Yomichan and 「記憶や印象が月日とともに薄れていくこと。「戦争体験が―する」」according to goo.ne.jp.
Personally I think it was intended to be a mix between 2 and 3, so as to leave it up to interpretation. If I’m at least on the right track, I really enjoyed the pun in 風化 ｛する｝, and what I’m guessing is the ‘setting as a reflection of the mind’ technique (bright but cloudy Spring weather reflects the bright but dimming memories of the narrator/the once-new but now eroding road).
I think the 季語 in this one is the first word, 花曇り, which Yomichan defines as “hazy weather in spring” while weblio defines as 「桜の花が咲く時期の曇った天気のこと。春の季語。どちらかというと明るい曇り空をさすことが多い。」
Let me know if I got any of that right. Regardless, a great haiku and a nice translation exercise!

Thank you for taking the time to think so in depth about it! You’ve put into words a lot of what I just had a vague feeling of while writing it.

My inspiration for this haiku was a memory of my study abroad trip to Kyoto. I lived near a temple called 醍醐寺 and would often take walks there in the Spring. To give you an idea of what that might look like (and how I interpreted the 季語 花曇り), here is a picture taken on the temple grounds (sadly not by me): 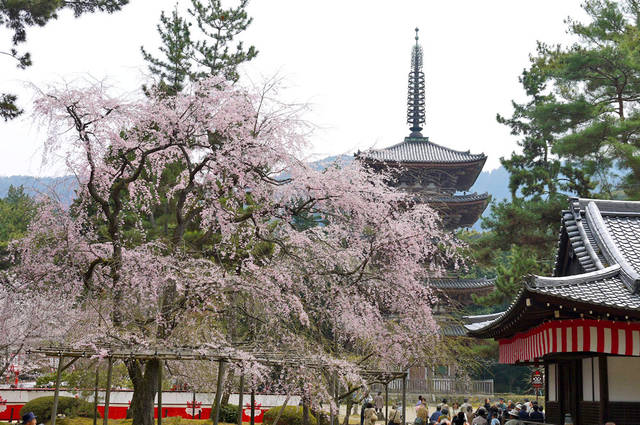 Wow, I didn’t even think of splitting 風化 into two words, but it does kinda work! I’m not sure I’ve ever seen 化する be used to talk about wind, but I like how it cuts the haiku into an unusual pattern:
花曇り
風化した
道一人かな
Even though this is 5-5-7, that is actually perfectly ok! It’s a technique called 句またがり, where the total number of mora stays the same but the distribution shifts to allow for a certain meaning.

This is the closest to my original intentions for the haiku. I don’t have a clue how to effectively translate 花曇り, but I think you did a good job with “A sunny spring haze.” The second line was originally meant to be taken literally as it is here with the weathered road. The last line has maybe the most variability in interpretation. Especially in early spring, while walking in 醍醐寺, I would be the only one on the temple grounds. That, coupled with the fact that I was often lonely (hence my pondering of the use of 独り), was supposed to be expressed with the last line. I think “Anyone at all?” does capture that hint of loneliness, so well done!

This is an interpretation I didn’t expect! I knew of the secondary meaning of 風化する, but I didn’t consciously attribute that to the journey (道) that I was on. It fits extremely well as these memories are almost 4 years old at this point, so they have indeed gotten hazy. I think the first and third lines’ translations are also very nice ways of teasing the meaning out of what are essentially one word lines.