Can I revert a review session?

I want to reset the last review session I did, because for some reason it had some bugs and some of the kanjis didn’t warn me about requiring On’yomi readings, so I typed the Kun’yomi one’s, and even though I entered them correctly later in the session, wanikani still thinks I answered them wrong: 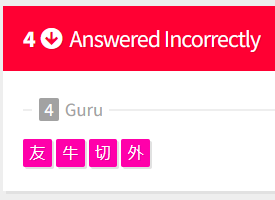 These items are now on Guru, instead of being on Enlightened even though I answered them correctly.

If the review session has already been registered as completed, you can’t revert the results no.

It might be frustrating right now, but in the bigger scheme of things, 4 items isn’t much. Think of it as getting some extra training. If you know the items, they’ll soon be back in enlightened.

That’s unfortunate, but as you said, they will be back to enlighten in no time

This seems to be a bug related to some user scripts that are no longer up to date as of like yesterday. I had the same thing happen to me this morning and emailed support already, but it seems like until the scripts are updated it’s just a thing that’s going to happen.

The issue is fixed. I had made a change to Double-Check yesterday to change the position of the ‘info’ message that pops up when WK has something it wants to tell you… but the same pop-up is used for the shake-and-warn, and I had mistakenly changed both. I don’t know why that caused shake-and-warn answers to be marked as wrong, but either way it should be fixed now.

I’m sorry for the answers that got marked wrong instead of letting you retry. I would fix them for you if I could.

Oh, so that was the problem, thank you for fixing it so rapidly :p.