This is part of the visual novel book club. Check out the club’s home thread if you need an explanation of visual novels themselves. 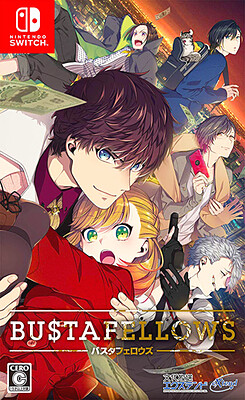 Android* (this one isn’t region locked)
iOS* (while it says English for language in the Swedish app store, I saw only Japanese inside, but I didn’t try buying it, but likely the Japanese version)
Switch JP (The ones in EU and US eshop is English only), physical also exists

OBS! There is a PC version via Steam, but it is English text only. It does have Japanese audio. So if you want to only practice listening and still read with us, for sure join!

This schedule is very provisional. We will check in on how long stuff seems to be as we go. Only expect the next couple of weeks to be fairly accurate at the speed we’re aiming for.

Please follow these rules to avoid inadvertent ネタバレ. If you’re unsure whether something should have a spoiler tag, err on the side of using one.

Will you be reading with us?

Which version will you be reading?

If you participate, don’t forget to set this thread to Watching in order to be notified when weekly threads get posted!

So we have a few different things to vote on. Currently, voting on schedule would be hard since I know nothing about how the VN works (we can only hope it has some kind of dividers beyond routes…). So I guess that will come.

But lets start with this:

Are you buying a physical copy from Japan?

If anyone is, we’ll have to wait at least 2 weeks before we start. Depending on where they buy it from and such.

So this first start date vote is preliminary (if we pick starting soon). I’m putting in several different options, pick 1-2 you prefer.

When do we start reading? (can pick two)

These polls will be open for about a week, or less if voting seems to dry up.

Anyone who have read this and happens to see this, I have a question.

Are there any dividers during the routes? Like dates, chapters, choices (can you save there/aka easily pause, quit and return later)?

And am I correct that there is a long common/main route first, and then it divides into the 5 (?) romance routes?

Thank you for your time! It will really help with organizing this club.

I went forum searching and found a couple of people who’ve read Bustafellows. I hope you guys don’t mind that I tag you.

The option is not in the poll, but I’m going to read along with the English Steam version, let me know if it’s not okay!

It is absolutely okay. I’ll see if I can redo the poll!

Edit: I could add a new poll. Sorry for anyone who had already voted!

@polv I edited the new poll too, so your new vote disappeared. Sorry.

To expand on my “maybe” vote – I’m going to read at least the free-on-Android chapter one, and then decide whether I’m enjoying it enough to buy the full game and continue.

Totally legit way to do it. That is a really good way to go about it.

I’m waiting a bit before buying it, I saw in the other thread that there should be a Steam sale around Nov 22nd, so waiting to see if there will be a discount on Bustafellows!

I don’t worry. I am just passing by.

I saw the free demo, easy to buy on Android, and I just have to try; and the opening looks interesting. I saw the price also, converted to my local currency.

I can’t do both this and 9-nine-, especially since this would be too lookup heavy for me without hooks, but I’m definitely down to follow along in English. Totally leaving the voting to serious people…

For anyone else nabbing the Steam version it looks like they put it on sale for ~$32 last year during the Autumn Sale. So it’ll probably go on sale at the end of next week if you’re looking to save a few bucks.

It’s divided into chapters which makes it easy to split it up. The good thing about Bustafellows is that it doesn’t have a route lock so you can play through anyone. That being said, you would have to use a guide or you would end up with a bad ending…or the game can end during the prologue.

Oh and there is a common route. The choices you make in the common route decide which romance route you play. Limbo is supposed to be the poster boy but IMO he has the least interesting story.

@Yoshimaster55 Thank you for the info! Are the chapters similar in length, did you notice? Also do you know how many chapters there are? Maybe that depends on route.

I guess I have to go looking for a spoiler free guide.

Each route has four chapters which includes the common route. I can’t recall if they are all the same length but I would imagine they would all be similar. I don’t recall any being exceptionally long. Also, the four chapters are side A which is kind of the story. After that, there is a side B which is like a small chapter that focuses on the romance.

So after you’ve done your first route, how much overlap in story content is there in the four chapters?

Basically, the more I know, the better I/we can plan how to read this together. Really appreciate the help.

The first chapter is the same with everyone except you make different choices so there can be some slight variation in character response. After that, the story is entirely differen. There isn’t any overlap between routes.

I haven’t played the game (that’s what I’m here for P:) but I did some investigating and found this about the structure of the game and recommended route order:

It could be nice if we could do one chapter per week so 5 for the common route (prologue + 4 chapters) and 2 more per route (sides A and B), plus 2 more for the finale (whatever that means) for a total of 17. Then again 17 weeks is exactly what Loopers lasted and this game is supposed to be almost 6 times as long so… we are in trouble

I’d say we’d have to at least double those times (and that’s a reaally long time for a club but it’s still a higher pace than we’ve done before, I’m scared), but I also don’t know if the lengths of the different chapters are similar at all… VN clubs are hard

I guess another option is to start with the common route, do one character route and depending on how long we take and how the group is feeling we can continue or sink into despair.

5 for the common route (prologue + 4 chapters)

The first chapter is the same with everyone except you make different choices so there can be some slight variation in character response. After that, the story is entirely differen. There isn’t any overlap between routes.

I’m just checking so I understand things correctly. If the different choices in the common route actually adds a lot of new content, then that would explain some of the length.

I guess another option is to start with the common route, do one character route and depending on how long we take and how the group is feeling we can continue or sink into despair.

I definitely think picking one route (and we’ll vote on which one) to start will be the path. Then as we finish it, or get close to finishing it, we can start to figure out what to do about more routes, and such things.

There is also like bad endings. Which is, of course, something people can do on their own time, or if that should be part of the club. (Also like, how to know when an option leads to a quick bad end or onto another route… -.-’ ) But as I understand they unlock CGs.

I have found two different fairly spoiler free guides in English (I haven’t looked for them in Japanese yet, I wanted something I could skim quickly), one with seemingly the most critical decisions plus some guidelines on picking, the other one giving all the choices (but without context, literally just listing them).

I’ll have to look for one in Japanese though, to get the actual correct Japanese answers.

Remind me again why I nominated this?

I haven’t looked for them in Japanese yet, I wanted something I could skim quickly

Here’s a japanese one from the site I usually use, this one’s also just a list of the choices as well as where to save to get the bad ends.