You must really want to read it too, because it’s the only one you voted for.

Yep. It’s the only reason why I’m here.
This book club is quite fun, too, so I’d love to read it with others, but I can do without.
Or maybe we’ll make a two person book club

I really would like to reread this with others, but if it doesn’t win I’ll just keep reading new chapters instead of rereading volume 1. But when you catch up to me @Naphthalene, I’ll gladly pick your brain. Unless you get annoyed at me for asking a million questions per chapter.

I really don’t feel strongly about any of the contenders this round.
So I’m thinking maybe I will abstain from voting… unless someone wants to bribe me to vote for their choice…

Nah, it will give me a chance to talk about random parts of the story.
My favorite pastime is to overthink plot points and then talk about my random hypothesis.

I started watching the first episode of the anime a month or so back and found it too moe, but then I gave it another chance last week cos of the upcoming vote and now I’m addicted

I’ll probably vote for it nearer the end if it looks to be between that and something else I’m less keen on. It seemed a little tricky for me. If it was the second pick, would you be willing to wait to read it with the group, or is it absolutely the next thing you must read? ^^

It is my favorite cgdct anime for a reason!

@Radish8 It’s down to fourth place now though!

You don’t even feel strongly about the book you nominated?

I already own the first volume of Natsume Yuujinchou, so I hope it wins

I know, I could do with some support there @Kyasurin!

I don’t even want to read that one, I just thought it was funny.

You gonna buy the new version of Penguin Highway (with furigana)? 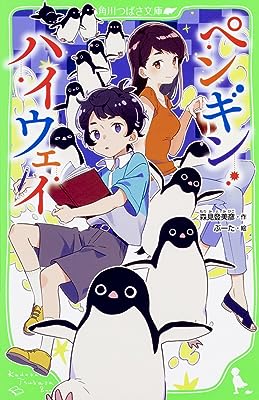 Also which Floflo books are you buying?

Ah, you’re forcing me to reveal that I am unreasonably weird about book covers

so although it would be far more sensible to buy the version with furigana, I’m probably going to buy the other one because I prefer the cover, and then regret it horribly… Hopefully it’ll get voted onto FloFlo and then I’ll be saved and get to practise my kanji recognition

Other than that, I’m probably going to get 霧のむこうのふしぎな町, the one which just won the latest poll, and maybe kemono no souja erin - even though it didn’t win, I might be able to get it through the loser’s poll.

I’m sort of waiting to see whether any translations of English books that I like get through as well - I’m reading Snow White in Japanese atm and (unsurprisingly, I suppose) it makes such a huge difference to my understanding. Even though it uses crazy fancy language, it’s such a familiar story that I’m finding it much easier than the Japanese folk tale I read.

Yes, the other cover is much nicer! That’s actually why I bought the version of Kiki without furigana.

(well in part at least) However! People that had the version of Kiki with furigana got to really enjoy the pictures that showed up from time to time. So I’m thinking of getting the new version of Penguin Highway mostly for those pictures.

I don’t know anything about 霧のむこうのふしぎな町, but 獣の奏者 will probably be really hard, if it’s anything like the anime. There will be a lot of historical stuff and a lot of world-specific terminology.

Saaaaame with Kiki! Yeah, I saw Kyasurin’s pictures, I think, in the Kiki threads and was pretty sad about not having those. I don’t have any other kadokawa tsubasa books, but I have an aoi tori book (aimed at slightly younger children) and the illustrations are really nice. I wish I had an actual bookshop where I could go and look at what I’m buying.

I’m concerned 霧のむこうのふしぎな町 will have similar kanji issues to Kiki, but I’m hoping the language will be a little more straightforward.

獣の奏者 will probably be really hard, if it’s anything like the anime. There will be a lot of historical stuff and a lot of world-specific terminology.

It is a definite ‘future goals’ book, don’t worry

How hard was Kiki? I really want to go back and read it, but maybe not while working my way through Aria.

I’ve seemed to always look at this topic at times when everyone is in the middle of reading a book, but now I have a chance to vote!

I hope to actually partake this time, hopefully I’m not too busy when it starts

Hard enough that only four people finished, and one was from the intermediate book group. But I think that’s because if you’ve never read a Japanese novel before there’s a huge hurtle for the first few chapters where you’re learning general writing style for novels (and this author’s particular style).

It looks like every book in the のんのんびより series is half off until August 9th on ebookJapan. Just wanted to make sure people who usually buy ebooks see this before it’s too late (even if it doesn’t win).

I do like the book I nominated, but not enough to read it on my own.

I think part of the problem is that I am not “beginner” level but neither am I able to keep up with the Intermediate book club. I’d really rather read a novel than manga, but I don’t know which one would be best for those of us who are between those two levels. I was quite taken with the idea of Penguin Highway and I’m really sorry it’s too long to be considered. What happened to 時をかける少女？ Or did we decide it was too hard?