fixed ^^. When I proofread that sentence I just read the more and not the context…

This might actually be a good timing to bring up something that I have wanted to bring up for some time. Looking at the current poll only 1/3 fulfill the requirements of having more or equal to 20% in the poll. Do you guys think that 20% is too high? Does the stipulation of having to meet these requirements 3 times in a row make up for the high bar?

If only 2 in 10 people want to read something, I wouldn’t say it’s what the club should read.

Or is it based on total of votes, idk.

It can always come back, right?

That’s a good question, I recently wondered the same for the IBC (where it’s 20% as well) and ABC (where it’s currently 10%). The effect of these thresholds is that in IBC we regularly kick out books that don’t get picked while in ABC we hardly kick out any books because at some point they usually end up getting enough votes. (We’re also talking very low poll participation rate here, so often two votes is enough to get over the threshold.)

So when I look at IBC and ABC, I try to not only look at the amount of books that get kicked out but also at how many people vote and how many proposals you get. The more people vote, the harder it is for a nomination to accidentally fall below the threshold (i.e. I guess it’s rather unpopular in that case), and the more proposals you get, the better it is to get rid of unpopular proposals to keep the club interesting and the nominations fresh.

So no clear answer from me

because I don’t have one either, but some things to look out for as well when judging what’s currently going on.

If only 2 in 10 people want to read something, I wouldn’t say it’s what the club should read.

The tricky part is that some might want to read it, but it’s not in their top [number of votes they can cast].

I look forward to the day when AI can analyze everyone who is interested in participating in a book club, and will go out and discover the best pick considering the skill level and interests of the participants. (AI programmers just need to work out that bug where the AI keeps suggesting manga about machines taking over the world.)

Mmm, I think that the threshold should be set at a level that means you aren’t running out of spaces in the poll for new proposals. The last ABC vote had 15 options, so we had plenty of space for more. But the BBC has way more members, probably more proposals, and the dynamics are likely very different.

Note that “only got 20% of the vote” doen’t necessarily mean “only 2 in 10 people want to read it” – for some of the other 8 there might just have been 5 other options they liked more.

That said, the current threshold resulted in 3 drops for the BBC, and they were 3 of the bottom 4 in the last vote. That feels to me like the algorithm is producing basically reasonable results.

It is the case that in the last two polls at least 2/3 of the options got less than 20%. In that sense, I feel like 15% might be better. We do have to be careful not to make it so lenient that we get stuck at 20 nominations and people can’t nominate new books though.

Edit: @seanblue beat me to it, and put it much more succinctly.

That does seem like quite a lot might drop; and it’s not like the poll was very close to being completely full. Maybe drop the threshold to 15% and see how it goes, then?

(Idle musing on system dynamics: I think if the threshold is too high you might get a cycle where a lot of books get dropped; then the next poll has a comparatively short list where it’s much easier to hit the threshold, so almost everything in it gets to be ‘safe’ for another couple of polls; so then it takes another three or so polls during which the list gradually lengthens, before you get another drop-lots cycle. But it’s a bit hard to tell given the time between polls

I know everyone really wanted to pick Blue Box but I understand most people had to make sacrifices this time round. Don’t worry guys there’s always next time

Thank you for all the arguments and participation in the discussion. It seems the most prevalent two options are 20% & 15%. If the rule had been 15% before the end of the last poll, we would have 1 more book since Ranking of Kings scored 19% in its first appearance.

What should the threshold be for a nomination to be removed? (3 polls in a row) 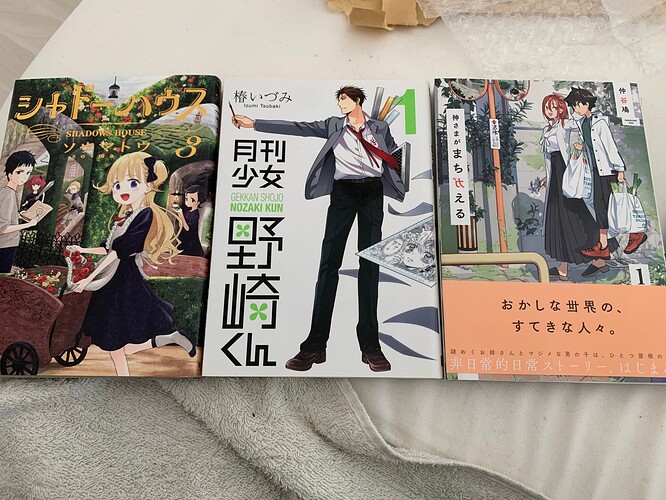 I am looking forward to reading them, too! I heard that the third volume of Shadows House is especially good. Can’t wait

Interesting. The third volume is actually my least favorite. (Not that it’s bad. Just got a bit repetitive for me.)

Yay, I just got my copies of 神さまがまちガえる and 月刊少女野崎くん too! 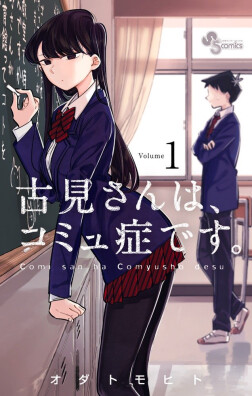 On her first day attending the elite Itan Private High School, Shoko Komi immediately receives an overwhelming surge in popularity due to the unprecedented stoic beauty and refined elegance her classmates perceive her to possess. However, only Hitohito Tadano, an exceedingly average schoolboy who sits next to her, discovers that behind her bishōjo appearance, Komi has a severe communication disorder. Tadano learns that Komi’s goal is to make 100 friends, and resolves to help her reach her goal.

Watching (and enjoying) the Netflix adaptation has made me interested in reading this. I think it’d be a good fit for this book club. The difficulty level matches other manga that we have read and I think that humorous slice of life manga has a broad appeal. If you’re unsure whether you might enjoy reading this, check out an episode on Netflix

For some reason, I thought this one was already nominated, but apparently not!

It’s been on my “to consider checking out” list for a while, although at the moment my stats show I’d be looking up 1/5 of the overall words, so I’ve been holding off for now. I’ll definitely join in if it gets picked.

If it gets picked sometime, I have a frequency list for anyone who’d want to pre-learn some of the most common words.

at the moment my stats show I’d be looking up 1/5 of the overall words, so I’ve been holding off for now.

O man, if I used that criterion I’d never read anything!

Same if that was my only selecting factor

Percent words known is something I use to sort my “to consider checking out” list if I want to pick something “easier” from the list to start reading.

My “to consider checking out” list currently has 66 items (but grows often), with 古見さん sitting at number 36 on the list.