Edit: to be clear this is meant to be a reply to @shuly but for some reason I’m having troubles with actually making it a reply?

Edit: to be clear this is meant to be a reply to @shuly but for some reason I’m having troubles with actually making it a reply?

This is actually a change in the forum software that was introduced a few weeks ago, I think: When you quote somebody, then the post is no longer a reply because people thought that it was somehow the same thing twice (reply AND quote)

so it was changed so that now it’s only either-or. I’m not exactly sure whether I like this change, though

Meanwhile, my brain sees English in a weird font and short-circuits trying to figure out why I don’t recognize the kana…

I saw a t-shirt yesterday (didn’t take a picture unfortunately) which had text in English, but using deformed kana in place of some of the English letters. Was kinda weird.

By the way, what manga is that?

I think Japanese looking letters are pretty common, though I don’t know about the specific thing you saw.

As @Kazzeon said, it is 五等分の花嫁 (The Quintessential Quintuplets is the English title). I finished the series a couple of months ago, but some of the little quirks from the series still stick in my head.

I didn’t know which kanji the title used so I didn’t want to guess.

And then there’s this for English:

and the award for best furigana goes to …

I reckon Flying Witch’s use of is a fair contender.

As @Kazzeon said, it is 五等分の花嫁 (The Quintessential Quintuplets is the English title). I finished the series a couple of months ago, but some of the little quirks from the series still stick in my head.

That’s what I thought. I saw the hair band and was like, Yotsuba… I watched the first season of the anime last year when I had access to Netflix Japan to get some listening practice. Part of me was like “ugh typical harem”, but the other part of me enjoyed it enough (gave it 7.5/10) and was curious how it would go. So I actually started the manga last week (got the first two volumes for free a while back) despite my general hatred of harems. We’ll see if I actually read it to the end though.

(Also, there’s already a clear best girl simply from the first season of the anime, and any other ending would probably leave me unsatisfied, but I guess that’s just how it goes with this kind of story…)

Flying Witch’s use of

Yotsuba would be proud.

I hope we end up having an offshoot reading group for Shadow House. Been reading volume two on my commute and y’all…I have so many thoughts and questions

I’ve already read through volume 9, so I promise I have even more thoughts.

Just like with the first volume I wouldn’t read along, but I’d hang out and help answer questions and discuss the story.

Yeah perhaps that would be better! Can imagine it won’t be long until I’m caught up 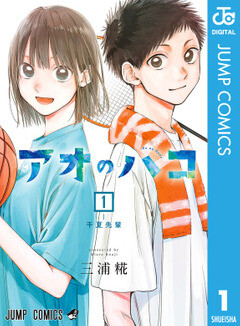 Natively: Level 25 (This is currently only based on my ratings so take it with a pinch of salt)

The series focuses on Taiki Inomata, a student at Eimei Junior and Senior High who is a member of the boys’ badminton team. Every morning, he trains alongside his upperclasswoman and fellow crush Chinatsu Kano, who is on the girls’ basketball team. However, Chinatsu moves in with Taiki’s family when her parents leave Japan to work abroad. With Chinatsu now living with him, Taiki aims to slowly develop his relationship with her as they both strive to make it to the national championship with their respective teams.

This is the current romance manga serializing in Weekly Shounen Jump. It hits a great balance between sports & romance manga. Overall the characters are extremely likeable and believably written. This manga has some of the best character spreads I have seen, the art in those is truly stunning! Since it is a weekly manga the author can not keep that amazing quality up all the time but even the less detailed panels look really good! This and 推しの子 are probably my favorite currently serializing weekly manga right now!

If it’s an ongoing series, I typically consider it a con for a potential offshoot club that we’d have to wait for the next volume to come out. However, this series looks to have a new volume (seven chapters?) released every two to three months.

押しの子 or 推しの子? (Just confirming in case anyone wants to look it up.)