Yes, that’s what I did in the end. Deleted, saved, then added the new poll.

You need to add name=poll2 (or any unique name), after [poll , if default no-name doesn’t work.

For the record, you can also add a second poll in the post and then delete the first one. Polls are numbered so when you add the second one it will get a new number which will then allow the post to be saved immediately. (It’s not recognized as the same poll being edited.) 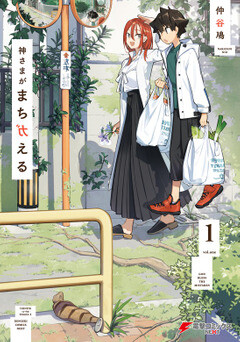 Kon lives in a world that bugs out regularly—every morning may bring a new surprise. But with Kasane, a researcher who studies this phenomena, he knows that each day will at least be interesting! Read the first chapter of God Bless the Mistaken the same day as Japan!

This is the new Manga from the Mangaka of Boom into you. It plays in a world that regularly bugs out and weird things happen. The atmosphere is very relaxed and at least the first 2 chapters remind me of Flying witch a lot, at least in the way it makes me feel.

I didn’t realize this was coming out today! I literally have a package of manga that shipped today… I would have preordered this one too if I knew it was being released. I honestly know nothing about it though, just that it’s by the same mangaka who wrote Yagate Kimi ni Naru. But that’s enough for me to give it a try at least.

Vote for the next book - now!

If you are interested in joining the next book club we run, you can - and should - vote!

Please look under “Current Proposals” in the first post for more details on each option, including links to sample pages which will help you gauge the difficulty.

Some people do find that reading a work they love or know already is inherently motivating, but please be realistic. Look at the samples and compare to others. Remember that both language and density contribute to difficulty.

For most items we list two different difficulty scores. They are displayed in [] in front of the name of the book/manga. The first score is determined by the polls within the nomination posts. These polls only take previews into account and are very tightly bound to the people that give feedback in the polls and are therefore not objective measures of difficulty. The second score is the Natively level (if available), because of the rating system the ratings without ?? should be more accurate, but the levels with ?? are just an initial guess that must be taken with a pinch of salt.

When will we start and how many will we pick?

We will likely begin reading on the 16th of July, right after we finish reading 夜カフェ. If a short manga (expected less than 8 weeks) wins we will also read the second place option following that without holding another vote. (The short manga determination is not final since it is based on limited information and might change)

How does the vote work?

The poll will be closed on Sunday, June 5 at the latest.

You can vote for up to 5 options.

You can change your vote at any time by clicking ‘Show vote’ at the bottom.

If one of the regulars could change the title to the following, that would be great!

I think it’s less that a short manga is preferred and mostly that short manga make up the bulk of the list (9/17 nominations, if my quick count is correct)… Speaking personally, I can say that I actually had a bit of a hard time picking this time around. While there are some that I personally have zero interest in, I had a couple that I was like… Wait. I kinda want more than 5 picks, please. Both of the 妖怪 series are interesting to me, for example, just a lower interest than some of the other picks. Either way, I hope they will hang out for future nominations, because I would like to read them at some point! It really was tough to pick this time.

I don’t think I’d even noted that most/all my picks were short manga (in fact only manga overall). If I actually had a choice outside any specific nominations, I would love to read a book rather than a manga with the book club, because I feel more intimidated by them. But in the current nominations there aren’t any books that I find intriguing, so I ended up only voting for (short) manga.

You’re making me want to nominate books! Maybe I will for next round (if there’s still room for nominations) …

I didn’t actually realize I was (only) voting for short mangas either tbh… ^^’
Just chose the ones I found interesting
Shadows House being my absolute favourite, so much that I was even considering buying it for myself anyways - if it’s gonna be picked or not
… just sad that it’s not available from Manga Republic

Edit:
wait… it actually is…!?!
wtf how did I miss that I was even looking it up earlier today!? :o

Honestly I haven’t heard of any of these before. Though I really don’t mind anything as long as it’s interesting enough and at the right difficulty level

The vote on what we are going to read next is still open until the end of Sunday (22 GMT). If you haven’t voted yet scroll up a but or click on this link to get to the poll!

Omg Shadows House is actually winning - I‘m so hyped!!!
I did end up ordering it when I realized it was available from MangaRepublic so that would be … just amazing

… so actually please don‘t vote anymore and leave it as is, guys

That (kind of) concludes the vote, thank you to everyone that voted and/or nominated something!

From the 16th of July we will be reading Shadows House

@seanblue would you be willing to host the club?

Since Shadows House is a short manga we also need to nominate the manga that we are going to read afterwards. Because the second place was shared between 3 different manga we will hold a short deciding poll in which everyone will only get one vote, that poll will only last for 2 days. If by chance we still have a tie we will choose one at random.

We also have to say goodbye to one book because it did not reach 20% in 3 consecutive polls:

That (kind of) concludes the vote

Ah, no wonder I couldn’t sneak in and change my vote to force a second-place winner for a last-minute upset. (I wasn’t really planning to!)

Good luck to everyone in the run-off!

So hard when I have to pick between two I want to read about equally. Picked the one that seems harder because if I get the easier one I can probably more easily read that by myself if necessary.

So hard when I have to pick between two I want to read about equally. Picked the one that seems harder because if I get the easier one I can probably more easily read that by myself if necessary.

@seanblue would you be willing to host the club?

As mentioned in the nomination itself I would prefer not to run the club. If no one else is willing I can, but I’d like you to ask for volunteers first. (I will be sure to follow all the weekly threads and help answer questions regardless.)

Since Shadows House is a short manga we also need to nominate the manga that we are going to read afterwards.

Just curious, but what is the schedule plan to make Shadows House a short manga? It’s 12 chapters long, so is the plan to ease in with two weeks at one chapter each and then do the rest at two chapters per week, or something like that?