I have both versions of 時をかける少女 and I’d join reading additional stories from either version, if anyone is up to it.

I have that one as well. 時をかける少女, 悪夢の真相, and 果てしなき多元宇宙. I didn’t expect this when I bought the book, it was a pleasant surprise. The better one I think is 時をかける少女, but the others I found entertaining too.

When do they even sleep

I don’t even know my sleeping schedule anymore, it’s a mess

Today I woke up at 1 PM (about half an hour ago where I live) so there’s that.

About the format, I enjoy answering questions, but I notice in 時をかける少女 there’s not a lot of discussion about the actual book I think because there’s just not that much to talk about. It it was it is, and is pretty fluffy. If we were going to read 放浪息子 on the other hand, for example, I think there would be a lot more to say.

I agree. The problem is that the book is simultaneously fast (all those cliffhangers) and slow (not much happens in each chapter).

Honestly don’t feel qualified to vote in the difficulty polls. I haven’t got the foggiest idea how to judge difficulty. 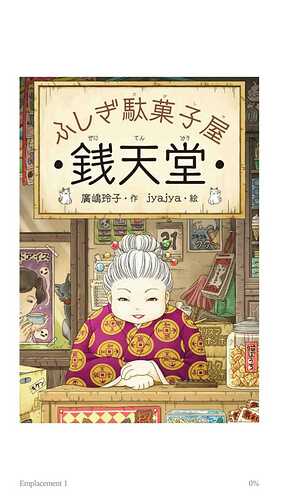 Zenitendou is a mysterious candy shop that can be seen only by people hoping for better luck. The shop is full of fascinating sweets that make wishes come true. All the sweets presented by the owner, Ms. Beniko, are just perfect for the customer and work wonderfully. However, one should follow the instructions very carefully… You never know what can happen if someone doesn’t eat them correctly, or worse, gets carried away.

I spent the winter holidays in Japan, and as I was sitting on a train I saw a girl reading this book and enjoying it so much, that I couldn’t resist dropping something on purpose just to have a peek on the cover. And yes, I was able to read (most of) the title! When I googled it I was very surprised to find out that the series has its own website 【無料ためし読み公開中！】ふしぎ駄菓子屋 銭天堂 公式サイト - 偕成社 and a youtube video with a brief introduction of the candy shop: 【公式】「ふしぎ駄菓子屋 銭天堂」とは？｜TVアニメも放送中！ - YouTube

I watched the video, and it looks really intriguing to me!

for a comparison, Toki wo kakeru shyojo has 238 pages

It’s actually about half that length.

Oh really? I just looked at the number given on amazon

It has some short stories included too, so the actual main story is not all that long.

I just have the kindle version, so if anyone tells me the right number, I’ll update it

I think there’s also an element of spoiler-avoidance. I don’t know the plot of the story exactly, but I’ve seen the anime and in the past have read the Wikipedia page for the book, so there’s a limit to how much I can speculate on future events. Perhaps books without anime adaptations would naturally have a little more discussion as a result.

Raionus would probably add it if it were picked though

it’s not a given, obviously, but at worst we could nominate it to be added and then all vote for it on Patreon

@Elenakiyomi I think 時をかける少女 proper is about 120 pages of text, for comparison.

That book looks pretty easy (too easy for me probably). Plus since it’s targeting kids it’s missing a bunch of kanji. I need to finally read a book with proper kanji usage.

This absolute jumble of romaji standards packed into a single word makes my soul hurt. Only way you could have made it worse would have been to write, like “shyōjou” or something.

Hahah sorry! I just know how to make things appear correctly in Japanese

Thanks! I think I’ll keep the total 160 since I suspect that there are a bunch of pictures in this book, but I don’t know how much space they take

Yeah, it’s tricky to compare properly without actual copies of both

your nomination certainly looks like it would have a few pictures.

I think it may be a bit too easy for me, but the description seems right up my alley (got a bit of a petshop of horrors vibe from it actually) so I’d definitely read it if it was selected… And maybe if it isn’t. Thanks for pointing this one out!

The summary reminds me so much of ショコラの魔法! (Amazon JP Link)
It’s a manga about a witch chocolatier who makes chocolate that fulfills wishes, but also takes something valuable from you at the same time. Also one chocolate flavor / backstory per chapter, I think. I don’t know if there’s an English version, I read some volumes of the German translation of the manga, and found it really cute

That looks pretty good. I think it might make a more simple book (maybe too easy?). Definitely an interesting concept

The poll will open for the next book in about a week, so take the chance now to read the samples for the nominees and vote in their difficulty polls.