I moved it over to the intermediate book club.

Good call. I might be interested in reading it there (since you indicate it is so much fun

A 4-koma gag manga that revolves around the life of a first-year grade school girl genius, Hatsume, and her inventor father, along with her invention; a robot box named “Hako.”

I think it has a great balance between being pretty easy and enjoyable to read (the gags made me chuckle out loud). It combines elements of Yotsubato (a young girl whose misunderstandings often lead to hilarity) and Nichijou (a precocious inventor with a penchant for useless inventions). The language is very approachable: slice-of-life vocab and relatively short sentences. The chapters are also quite short, so reading it has felt like a bit of a snack

gulp am I doing this right?

The people of the kingdom look down on the young Prince Bojji, who can neither hear nor speak. They call him “The Useless Prince” while jeering at his supposed foolishness.

However, while Bojji may not be physically strong, he is certainly not weak of heart. When a chance encounter with a shadow creature should have left him traumatized, it instead makes him believe that he has found a friend amidst those who only choose to notice his shortcomings. He starts meeting with Kage, the shadow, regularly, to the point where even the otherwise abrasive creature begins to warm up to him.

Kage and Bojji’s unlikely friendship lays the budding foundations of the prince’s journey, one where he intends to conquer his fears and insecurities. Despite the constant ridicule he faces, Bojji resolves to fulfill his desire of becoming the best king he can be.

I find the premise very interesting as it is rare to see disability explored in Manga, especially for a shounen/seinen fantasy protagonist.
More generally I’m also excited to explore more approachable fantasy / plot-driven series, as I find them a bit easier to engage and stick with than episodic slice-of-life.

I have started a best-effort vocab sheet covering all the Kanji words I found in the first 2 chapters and all the Kana-only words for at least the first chapter, but I’m still quite new to this so I’m not super confident in it yet (until I actually read through it proper). I’ve shared it now as it might be useful to get an idea of the vocab we would encounter.

You list this as a con, yet I need to build up that fantasy vocab somehow - definitely counts as something of a plus in my books haha

Oh I’m so glad to hear it’s not just me!

My longer term goal is definitely to build up a fantasy and sci-fi vocab as that tends to be what I want to consume, so I’ve been trying to find a bunch of media vaguely in that direction while still being approachable =D

Edit: I put fantasy vocab as a con as the top post on recommendation guidelines was worried about the extra specific vocab fantasy needs.

Not exactly sure but this manga might be suited for the Absolute beginners club. I’m not exactly an expert on the difficulty of that club, maybe someone else that has more experience with that can jump in give their opinion.

Hello everyone and a happy new year!

I just added the new nominations to the main post. For ひらめきはつめちゃん I took the liberty of declaring it a short manga, since we will easily be able to read 2 chapters a week. For 王様ランキング the preview sadly did not include a table of contents so I really have to little information to go on. But from loooking over chapter 1 it looks rather dense. Maybe someone who has a copy (@chrisosaurus) could weigh in on this.

I also wanted to give a quick outline for what is going to happen in this club in Janurary:

Thanks for updating the main post and for finding king ranking in pixiv.

Here’s a quick photo of the ToC (sorry for lighting), I’ll update my original post later on as currently on mobile. 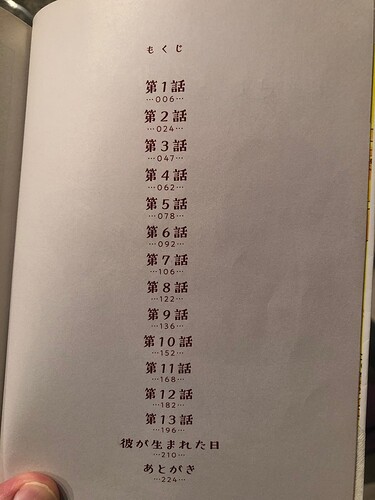 This manga is a bit on the longer side in terms of page count, which made me a bit worried suggesting it.

In terms of difficulty I find it very strange, I haven’t read it properly yet, but from my spelunking it does seem like many of the later pages aren’t as bad as the first few chapters, but it’s possibly I’m missing something as I haven’t wanted to dive in too deeply (don’t want spoilers =p).

Thanks for the help. We’ll keep it as a “long” manga for now.

Thanks to @NyappyTiramisu for running the “The Way of the Househusband” club!

This week the club will take a break reading, but next week we will start with Death Note!

As mentioned in my post outlining January we will hold a vote from 31st January. If you have any ideas about nominations please feel free to post them now. It is always good to have at least a couple days for people to look at the previews to gauge difficulty!

Hi every one, I’ll join the club. I love Death Note, good occasion to join. I remember having tried years ago to read the first chapters but what intimidated by the first page, osselets and so on. Time to get back at it

I’m confused. This is a book club for beginners in Japanese and you want to read Death Note?

Am I that bad at Japanese? I took the N3, but there’s no way I’d try to tackle Death Note. Seems way beyond my level and I’d say I’m starting out the beginning of intermediate level of Japanese (still need to keep brushing up on my elementary Japanese).

The poll about how much effort it would take was majority 3 - moderate effort. Of course people can join any level book club that they want, so there may be members who are above beginner level and are here because they want to enjoy some easier material.

How long ago did you take the N3? Did you pass? I just skimmed the preview pages but nothing jumps out at me as super complex to the point of headache. However complicated later volumes get, usually the book clubs only read the 1st volume and then have offshoot clubs if people are interested.

Not ‘beginners to Japanese’ per se, but beginners to reading Japanese. Also, there is a book club for absolute beginners. That’s the club I would recommend to people who have never read anything intended for a native Japanese audience.

Keep in mind we typically compile a vocab list together and help each other out with questions. That does make it a lot more doable to read a lot of these things.

Chiyo Sakura is a cheerful high school girl who has fallen head over heels for the oblivious Umetarou Nozaki. Much to Chiyo’s confusion, when she confesses to Nozaki, he hands her an unfamiliar autograph. As it turns out, the stoic teenage boy is actually a respected shoujo mangaka, publishing under the pen name Sakiko Yumeno! A series of misunderstandings leads to Chiyo becoming one of Nozaki’s manga assistants.

Throughout the hilarious events that ensue, she befriends many of her quirky schoolmates, including her seemingly shameless fellow assistant, Mikoto Mikoshiba, and the “Prince of the School,” Yuu Kashima. Gekkan Shoujo Nozaki-kun follows Chiyo as she strives to help Nozaki with his manga and hopes that he will eventually notice her feelings.

I watched the anime adaptation (on netflix) and thought it was very fun and funny. I really liked the main characters and I also liked that a lot of the time it focuses (in a humorous way) on the process of creating manga or stories in general.

Ooh, I just read the first one in English! I think it’s also noteworthy that it’s almost entirely in yonkoma format, so each page is almost like a self-contained little story, making it easy to put down and pick up again (they’re not really self-contained, but reading it felt like reading a bunch of very short, loosely connected stories)

Ha, I am about 40 pages into that manga as we speak! I am enjoying the yonkoma format. Every page you make it through, you get rewarded for with a joke

One thing that I am finding a bit challenging is that the context required to get the joke is sometimes implicit, so you have to fill in some blanks to get the joke sometimes. I am reading it while also watching the anime and that helps, cause those jokes are usually fleshed out a bit more in the anime.

yes I know this is an old post I’m sorry

@nellyneko @Phryne Thanks! I added yonkoma as a pro